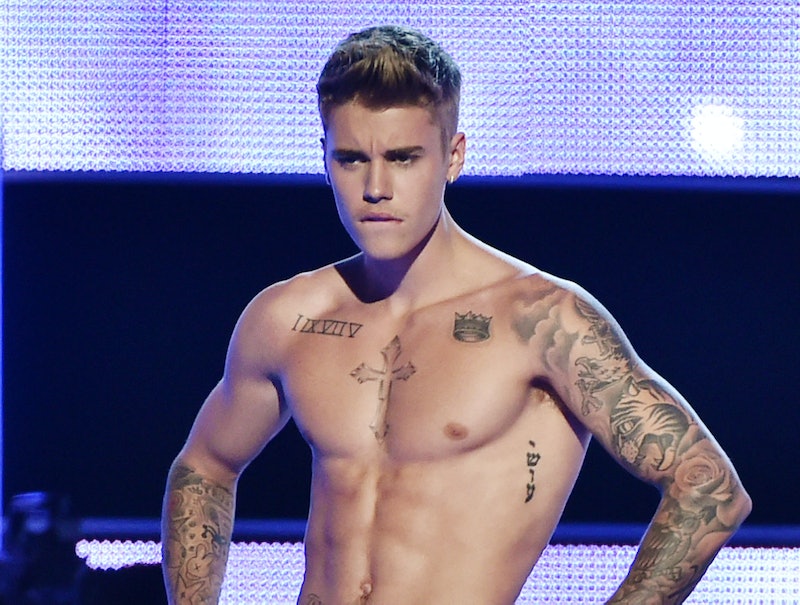 Ah, Paris Fashion Week. The vogue. The chic. The cultured. The Justin Bieber. Yeah, the “Baby” singer arrived in grand Paree this week with sometimes-girlfriend Selena Gomez to enjoy the sites and the brouhaha that is Paris during model season. Bieber has been busy partying with Gomez, snapping selfies with designer Karl Lagerfeld, and dinning with Kendall Jenner, all before fist scrappin’ with some photogs, as one is want to do in the City of Lights. Yep, reportedly, Justin Bieber punched a paparazzo in Paris. Try saying that five times fast.

The alleged attack happened after Bieber had dinner with It Girl model Kendall Jenner at a place that was fancy, but not fancy enough for him to take his baseball cap off. The 20-year-old singer was trying to enter his hotel when things got violent. Because, sadly, Bieber, despite your head-to-toe camouflage outfit, the paps still saw you to take a photo. Maybe try a better disguise next time.

TMZ has a few photos of the incident, but it looks more like the Biebs was just pushing the cameramen away, rather than throwing fists. Though, Bieber does have a bleak history in dealing with the paparazzi: in 2013 his bodyguard restrained him from attacking one in London, then his bodyguard was charged in February for stealing a $10,000 camera from a photographer for which there was that lawsuit (and ridiculous deposition) concerning Bieber hiring his bodyguards to assault a photographer on his behalf.

So really, I'm not surprised to hear that this happened — rumor as it may be.

Bieber's had a rather interesting time in Paris. Not only is he hanging with the Jenner and Kardashian crew — a group who has been said to not get along with his maybe-amour Selena Gomez — but Gomez was spotted talking to his rumored fling Miranda Kerr. Kerr, the model and ex-wife of Orlando Bloom who threw a punch at Bieber in July. If you were wondering, all of these ladies were at the same party at one point and, allegedly, Gomez was doing her best to avoid the Jenner-Kardashians and Bieber stayed away from Kerr. The paparazzo attack allegedly happened hours before the event after Bieber met with Jenner for dinner, so maybe it was all nerves? The pop star just wanted to get to his hotel room and gear up for an event that would surely be filled with awkward tension. Can we fault him for wanting more time to get ready?

Well, maybe not, I wouldn't resort to violence to get to my curling iron either.

More like this
Selena Gomez Is Fine Being Single, But She Still Manifested Romance On 'SNL'
By Martha Sorren, Jake Viswanath and Jack Irvin
Kendall Jenner & Devin Booker Reportedly Broke Up After 2 Years Of Dating
By Jordyn Tilchen
Justin & Hailey Bieber's Bond Is "Unbreakable" Amid His Ramsay Hunt Diagnosis
By Bustle Editors
Inside The Wild, Contrived World of Staged Paparazzi Photos
By Tess Garcia
Get Even More From Bustle — Sign Up For The Newsletter