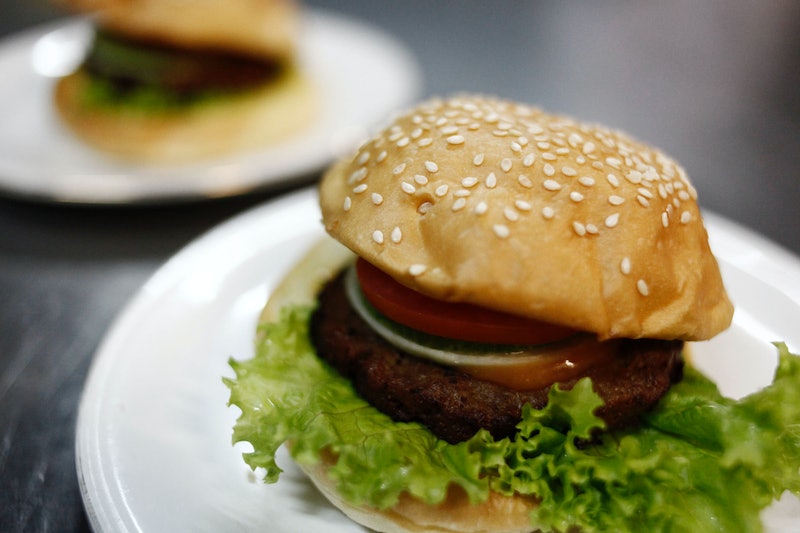 Ew, ew, ew. In today's edition of "Dear Lord, Why?" someone has made a human flesh-flavored burger in honor of The Walking Dead's new season premiere. Jim Thomlinson and Emma Thomas, a chef and creative director respectively, teamed together to come up with the idea after being asked by FOX International Channels to promote the TV show in the U.K. Publicity stunts are typical for Thomas; on her own website she states that she is known for "edgy PR campaigns," from cupcakes decorated with toothed vaginas to an edible 30-foot-long kraken tentacle that "washed up" onshore in Wales. Thomlinson doesn't have quite the same background in the macabre, but his company, London Mess, creates exotic dishes for events. Thomlinson researched cannibalism extensively for the project. According to the Huffington Post, the chef looked to various sources for inspiration, including celebrity criminal Issei Sagawa, who murdered and ate a woman in 1981; explorer William Seabrook, who describes the taste of human meat in his book Jungle Ways; and interviews of the 1972 Uruguayan rubgy team that survived a plane crash in the Andes by eating the dead bodies of their teammates. These accounts led Thomlinson to create a burger that is a combination of pork, veal, and bone marrow. In an interview with NPR, the chef said it will be served in a sesame brioche bun along with lettuce, cheese, and bacon-ketchup sauce, which I have to admit is more tasteful than expected for a people-flavored burger inspired by a TV show about zombies.

The recipe is posted on the London Mess Facebook page for any who feel like getting into the Halloween spirit and trying it, but I think I'll stick to my pumpkin spice latte. Images: Getty