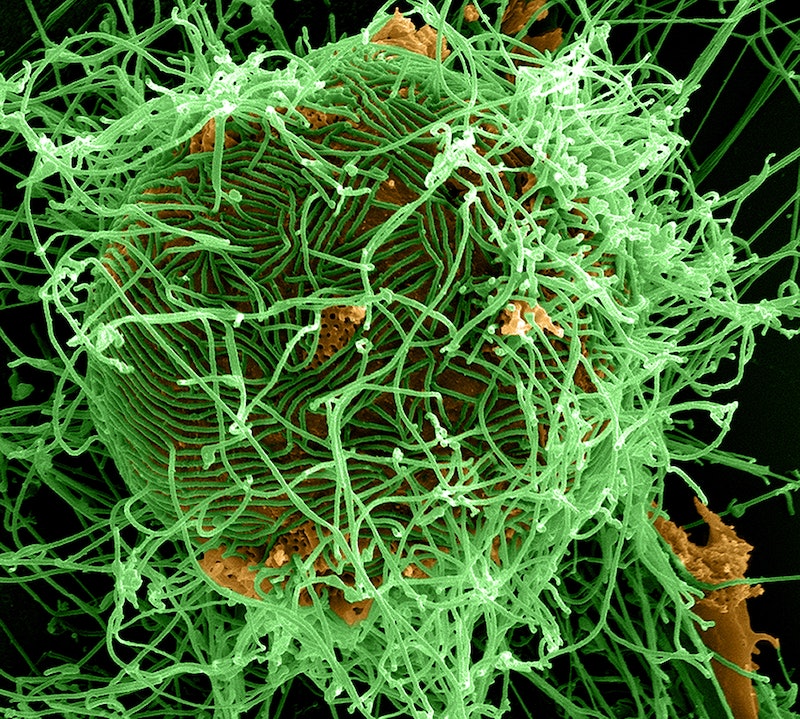 On Tuesday, we received the news we've all been dreading: Ebola is in the United States. An infected patient has been admitted to the Texas Health Presbyterian Hospital, where he's being kept in "strict isolation" — but he was around a number of people, including five school-age children, before being diagnosed. To most people, having the highly fatal disease that has claimed more than 3,000 lives in West Africa on American soil is a nightmare. But we shouldn't panic about Ebola in the U.S. — not to mention, as your mom told you, panicking never did anyone any good.

On Monday night, the Texas Health Presbyterian Hospital released a statement saying that the patient was undergoing tests for the disease. The next day, the CDC confirmed that the patient had Ebola. Though several infected Americans had returned from Africa to be treated for the disease and another 12 had been suspected of infection but tested negative, this is the first case of an American being diagnosed and testing positive in the U.S.

Though this is far from an ideal situation — it's downright terrifying, in fact — this doesn't mean the entire nation should start locking themselves in their homes. After confirming the case, CDC Director Dr. Tom Frieden assured Americans in a statement, saying:

Ebola can be scary. But there’s all the difference in the world between the U.S. and parts of Africa where Ebola is spreading. The United States has a strong health care system and public health professionals who will make sure this case does not threaten our communities. While it is not impossible that there could be additional cases associated with this patient in the coming weeks, I have no doubt that we will contain this.

The CDC Has Prepared For Ebola

In the CDC's statement, the organization clearly detailed exactly what they've done in anticipation for this day. For example, the CDC has made strides in improving detection of the disease by "enhancing surveillance and laboratory testing capacity."

They've also equipped other health departments with tools for conducting health investigations, have taught health-care workers measures for infection control, and trained flight crews, EMS units, and Customs and Border Protection officers in airports how to report ill travelers to the CDC.

The tenacity of the disease in West Africa is in large part due to those countries' limited health-care facilities. In contrast, the U.S. has advanced health systems and equipment that can easily isolate, monitor, and contain the disease. American hospitals also outnumber facilities in West Africa, where the health-care infrastructure is understaffed and ill-equipped.

U.S. health workers are also well ahead of the curve, with game plans set in place for this very scenario. To them, it was a matter of when, not if, Ebola came to the States. Even hospitals in rural areas have been equipped with virus-proof gear and isolation units.

Another Big Reason We Shouldn't Panic

Besides our thorough preparations, the disease itself is, despite contrary belief, not very contagious. It may be highly infectious, meaning if you come in contact with it you're likely to become sick, but there's a difference between infectious and contagious. The Ebola virus cannot be transmitted through the air, skin contact, food, or water. The only way to be infected is by touching the bodily fluids of another infected person or contaminated objects such as needles.