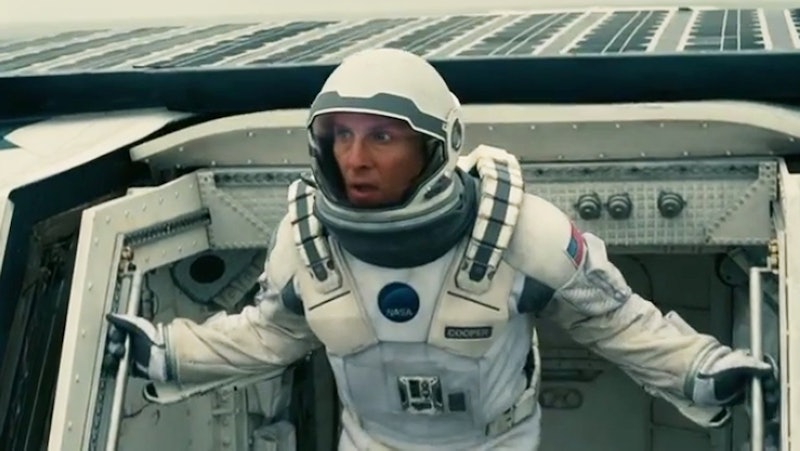 "You might have to decide between seeing your children again, and the future of the human race.," Anne Hathaway's character ominously says to Matthew McConaughey in the third and latest trailer for Christopher Nolan's space epic Interstellar . The early trailers for the film only tease the space adventure The Dark Knight's Nolan promised, but in the third spot for the film, we get a real mouthful of what's to come.

We see a post apocalyptic earth, destroyed by what appears to be a modern dust-bowl. "This world's a treasure, but it's been telling us to leave for a while now," McConaughey narrates. We see McConaughey and Hathaway's characters catapulted into the unknown outer space in the hopes of finding a new home for the human race, only to discover there is an extraterrestrial tidal wave (both literally and figuratively) of discoveries awaiting them.

The new trailer offers lots of sneak peeks into Nolan's intergalactic world, much more so than the first trailer which featured a tear-eyed McConaughey driving through a dusty cornfield and musing about the meaning of human life. Whatever it is, we'll take it.

The film comes out on November 7th, but if you're willing to shell out the extra bucks for a better view, Interstellar will be showing in IMAX two days earlier on the 5th.

Buckle up, space cowboys, it's going to be a wild ride.