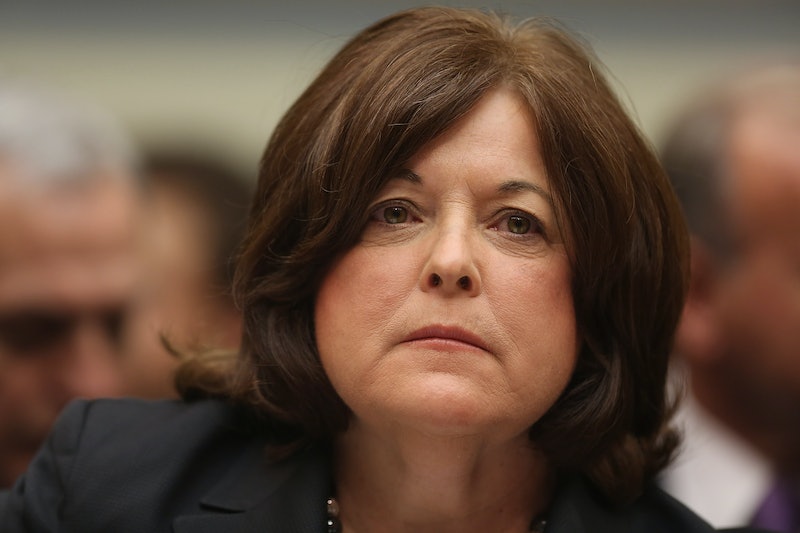 Following nearly two weeks of media and Congressional scrutiny, embattled Secret Service Director Julia Pierson resigned on Wednesday. The announcement was made by Secretary of Homeland Security Jeh Johnson, who accepted Pierson's resignation and saluted her 30 years of "distinguished service to the Secret Service and the Nation." Pierson's departure from the agency comes on the heels of a critical Congressional hearing that challenged the director's leadership in light of recent security failures, including the White House break-in on Sept. 19.

Pierson was the first woman to lead the Secret Service, appointed by President Barack Obama in 2013. Johnson announced on Wednesday that Joseph Clancy, a former special agent who was in charge of the Secret Service's Presidential Protective Division, will take over as interim acting director. Clancy retired from the Secret Service in 2011, and is leaving the private sector to return to the agency. "I appreciate his willingness to leave his position in the private sector on very short notice and return to public service for a period," Johnson said.

Johnson added that Deputy Secretary of Homeland Security Alejandro Mayorkas will oversee the ongoing investigation into the Sept. 19 White House intruder incident. Findings on the incident are expected to be completed by early November.

The Homeland Security Secretary also announced the formation of a panel of "independent experts" who will look into the events surrounding the Sept. 19 incident. According to Johnson, the panel will submit its own suggestions for security improvements at the White House.

Johnson emphasized that despite the recent security breaches, the Secret Service remains committed to protecting Obama and other U.S. government officials:

It is worth repeating that the Secret Service is one of the finest official protection services in the world, consisting of men and women who are highly trained and skilled professionals prepared to put their own lives on the line in a second's notice for the people they protect. Last week, the Secret Service was responsible for the protection of the president as well as 140 visiting heads of state or government as they convened at the United Nations General Assembly in New York City. ... There is no other protection service in the world that could have done this.

Pierson came under fire in the days after the Sept. 19 White House break-in, when details of the incident slowly unraveled. Although the Secret Service initially announced that the intruder, Omar Gonzalez, was unarmed at the time, it was revealed he had a knife on him, as well as ammunition in his car.

Then, on Monday, The Washington Post reported that Gonzalez made it further into the White House than the Secret Service previously announced. Unnamed sources told the news source that Gonzalez entered the East Room and ran across it before being tackled by an agent. The Secret Service initially said Gonzalez was apprehended just inside the North Portico doors.

During Tuesday's hearing, it was revealed that an off-duty agent was the one who tackled Gonzalez, causing members of Congress to further cast their doubts on the competence of the agency.

In a Wednesday interview with Bloomberg News, Pierson said stepping down was in the "best interest of the Secret Service and American public." She added that it's "painful to leave" the agency she served for decades.