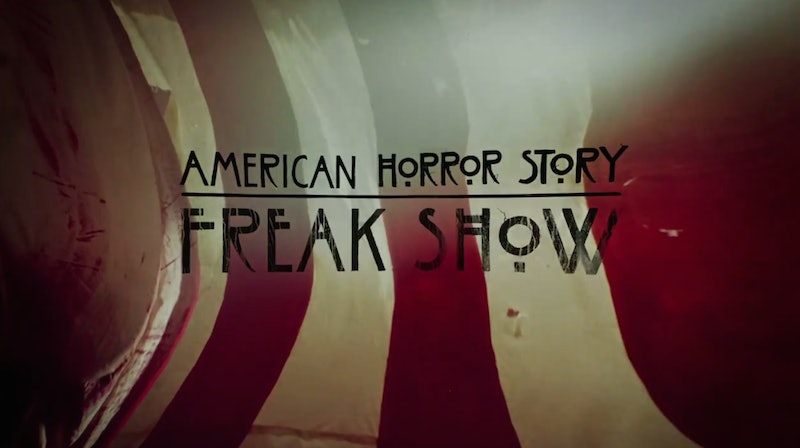 By now, I'm pretty sure every recent article about the upcoming season of American Horror Story go on about how this is going to be the creepiest batch of episodes yet. And while they're probably right, it's getting a tad bit old hearing about how AHS: Freak Show is going to give us nightmares when it premieres next week. (That said, though, it will and none of us are prepared for that freaky clown Twisty.) So, you will perhaps be relieved to know that I can confidently say the recently released opening credits for American Horror Story: Freak Show aren't going to give you nightmares...unless you watch them with the sound on, in which case, yes it will.

Made completely with stop-motion, the imagery of run-down (and very inappropriate) carnival attractions dance across the screen next to the names of stars like Jessica Lange and Sarah Paulson, and that alone certainly gives them the eerie feel that the show is going for — but it doesn't really get unnerving and uncomfortable to watch until you hear the background music, which is kind of a distorted version of the show's normal opening credits. It's slightly off-key, not how it's supposed to be, and completely embodies everything this season is supposed to present: Something morbidly fascinating and totally creepy.

So, kudos to Ryan Murphy and crew: I probably won't be desensitized to these opening credits by even episode 5.

Check out the clip below. AHS: Freak Show premieres on FX on Oct. 8.

More like this
These 2 Tragic ‘Stranger Things’ Finale Moments Were Improvised By The Actors
By Grace Wehniainen
Jesse Tyler Ferguson Had A Funny Run-In With A Fellow ‘Modern Family’ Alum
By Grace Wehniainen
What’s New On Netflix: Lana Condor’s Ghostly Comedy & A Sexy Reality Series
By Arya Roshanian
'Stranger Things' Cast Thinks It's "OK Not To Label" Will Byers' Sexuality
By Alyssa Lapid
Get Even More From Bustle — Sign Up For The Newsletter