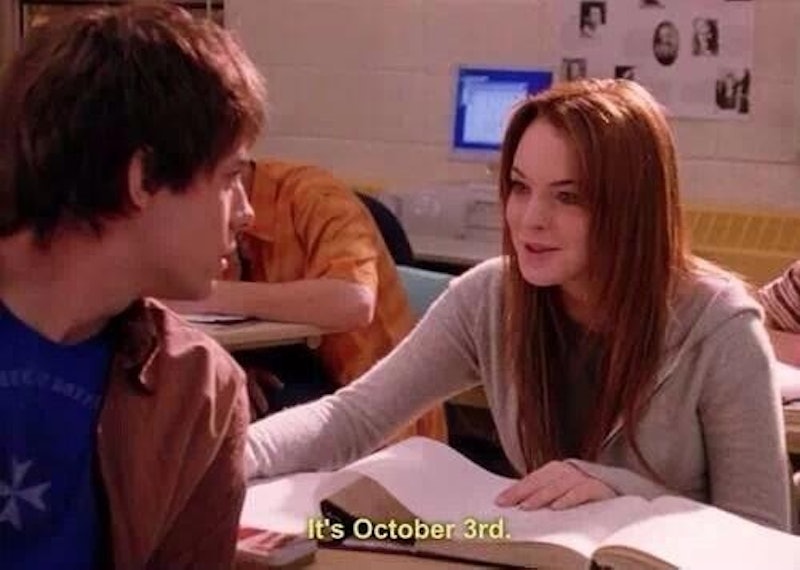 It's finally here— this Friday is October 3rd, unofficial Mean Girls day: it's the day that will go down in history as the day Aaron Samuels and Cady Heron spoke again. He asked her what day it was (it was October 3rd). This means an inevitable barrage of Facebook statuses and tweets and screengrabs of the scene, a flurry of Mean Girls fandom which, in years past, I have been guilty of participating in. I can't help it! I am of the Mean Girls generation!

But did you know that other things have happened on the date October 3rd? Like, real things in real life? True facts: October 3rd was a real day before Tina Fey made it infamous in 2004. I feel sad for October 3rd. It's got a pretty cool past, but all the great stuff that happened on that day has been eclipsed by a swooning red-headed Lindsay Lohan. It just doesn't seem right. October 3rd is as forgotten as Gretchen Weiners' candy cane-grams. So while I fully support commemorating Mean Girls on Friday in whatever way you please (except for wearing pink — it's not Wednesday), you can also celebrate these other grool events.

Wind Beneath my Wings

Legend has it that on October 3rd, 1964, beautiful, blessed Buffalo wings were invented at Anchor Bar in Buffalo, New York. Insert praying hands emoji here because what would life be without this deep-fried chicken slathered in sauce that makes you look barbaric when you eat it? Treat yo'self to some wings on Friday. And hell yeah, get that bleu cheese dressing.

October 3rd, 1955: the inception of The Mickey Mouse Club. Which is all fine and good until the '90s when it birthed the greats: Britney Spears. Justin Timberlake. RYAN GOSLING. Their very first forays with fame were on the Mickey Mouse Club roll call.

Before Ashlee Simpson (who coincidentally was also born on OCTOBER 3RD... conspiracy?) was panned on SNL for being a lip-syncer, there was Sinead O'Connor, a pioneer in live TV controversy. On October 3rd, 1992, O'Connor infamously ripped up that pic of Pope John Paul II when she was performing as the musical guest on SNL. Shit went down, of course, but looking back, O'Connor's act was actually a pretty brave protest. You go girl.

I don't know why but successful space travel makes me emotional. Yes, I watched the entire livestream of NASA sending a rover to Mars, OK?! October 3rd, 1985 was the maiden flight of the Space Shuttle Atlantis, and she flew for almost 30 years until NASA grounded her in 2011. She was the last shuttle of the shuttle program. LOOK AT HER, SHE IS A TESTAMENT TO MAN'S ABILITIES!

So go ahead, make a "He asked me what day it was" Facebook status, but while you're at it, pay a little mind to history, would ya?