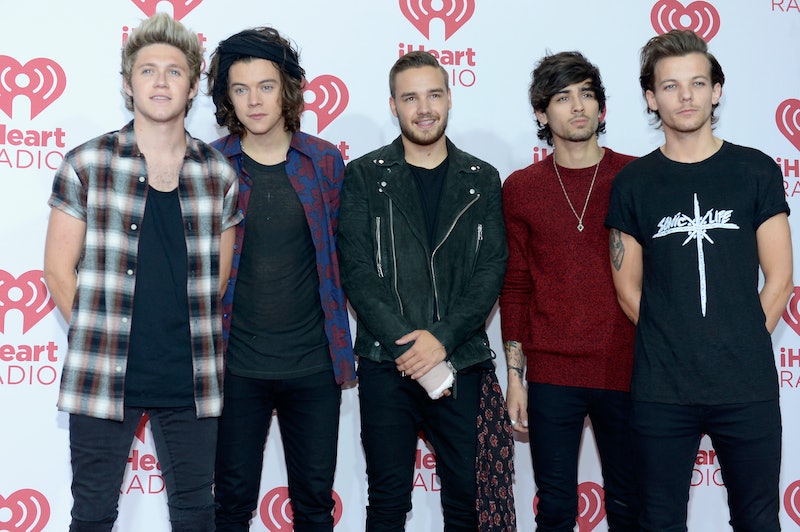 If the whole boy band thing doesn't work out for them, then the boys of One Direction certainly have a bright future in engagement planning. Between the number of times they've been proposed to or done the proposing (remember when Harry Styles proposed to that fan during one of their concerts?), weddings and 1D just seem to go together. Their latest successful proposal plan was absolutely adorable. According to several Vine and YouTube videos, One Direction helped a fan's boyfriend propose to them at their concert on Wednesday and Twitter helped make it happen.

The fan, whose name was Bradley Chisenhall, created a Twitter account a few days before the concert and mass tweeted the members of One Direction asking for their help in proposing to his girlfriend. Apparently, Harry Styles messaged him back and they worked out all the details. Then, at the concert, Styles took the time to introduce Bradley and display him and his girlfriend on one of the viewing screens, allowing him to make his proposal for all to see and broadcasting the moment his girlfriend said yes and leaped into his arms. Of course, Styles couldn't resist throwing a teasing comment Chisenhall's way at the end: "If you'd waited, I was going to get you up on stage. You ruined it!"

Naturally, the One Direction fans lost their collective minds.

I think the most important question on everyone's minds at this point is how do you make a 1D Proposal of your very own happen when you don't have an awesome boyfriend like Chisenhall? Luckily, based on One Direction wedding-related news in the past, I've figured out four full-proof ways to do it.

Styles proposed to a fan in the audience who showed up to a One Direction concert wearing a wedding dress. How is every One Direction fan — male and female — not heading out to the stadium dressed like brides and grooms after something like that? It's like none of you even want to be married to a member of One Direction.

When a bride's father ran into Styles in England, Styles was kind enough to record a voicemail for her asking her to meet up with him. Sure, that wasn't a proposal, but maybe if she had answered the phone then they could be walking down the aisle by now. It just goes to show you that you should answer every call, whether you recognize the number or not.

Director Ben Winston, the man behind such music videos as "You & I" and "Story of My Life", asked Styles to record a video for his friend. The bride-to-be then uploaded the video to Instagram, revealing that Styles had asked her to elope with him instead of getting married to her husband. Sadly she decided not to, but if you know somebody then a member of 1D could have proposed to you by now.

Chisenhall created a Twitter account just on the prayer that 1D might respond to his request to help him propose to his girlfriend. And it worked! Sure, that sounds like lightning in a bottle and the boys probably don't respond to direct requests to marry one of them in particular, but clearly it's worth a shot, right? I've given you your tools and now the rest is up to you. That 1D Proposal could be in your future.

More like this
Harry Styles Helped A Fan Come Out As Gay In Dramatic Fashion At His London Show
By Jake Viswanath
Adele Says It Would Be “Wonderful” To Have Kids With Boyfriend Rich Paul
By Jake Viswanath
Who Is Betty Who Dating? The Australian Singer Is Married To Her Tour Photographer
By Radhika Menon
Rihanna Is America's Youngest Self-Made Woman Billionaire, According To 'Forbes'
By Hugh McIntyre
Get Even More From Bustle — Sign Up For The Newsletter