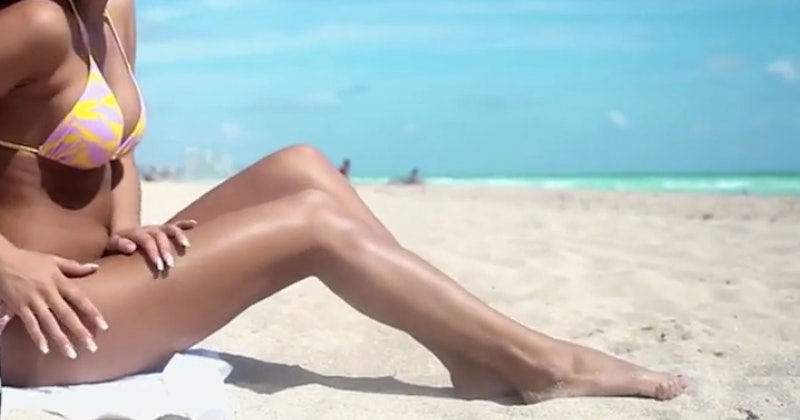 "I feel like I'm a walking advertisement for [my husband]," says 38-year-old Veronica Matlock.

The walking advertisement is for her husband David Matlock and his L.A. plastic surgery practice. The couple first met when Mrs. Matlock walked into her future husband's office to undergo vaginoplasty. Since then, Mrs. Matlock has also followed the good doctor's suggestions and gotten the complete "Wonder Woman Makeover," involving liposuction of the chin, arms, and legs, and a Brazilian butt lift. Apparently, it was love at first sight for the doctor, who then asked his patient, almost created by his own hands, to marry him.

This DIY kind of guy doesn't just fix up his dates — he's also undergone surgeries himself. The buff 49-year-old has undergone Vaser High Def Liposculpting, a procedure he pioneered himself. The procedure involves injecting fat from the patient's body into the biceps, triceps, pecs, or calves in order to add muscular definition. And apparently, it's not meant to look natural. "I just wanted to take my body to a point where, with exercise and diet, you couldn't get it there," Dr. Matlock explained to the Daily Mail.

So how does it feel to be the wife of a plastic surgeon who's also obsessed with fitness? "Because he keeps himself looking good, it's added pressure. So I feel like I have to look good, you know," explains Mrs. Matlock. "I know that David loves me for who I am," she told the Daily Mail, before adding, "There's a fat clause there." The couple both participate in body-building competitions, and are pretty proud of their big guns. "I weigh myself, and I do it every single day, sometimes twice a day," says Dr. Matlock. "We also have lot of mirrors around the house. A lot of times, just in the gym, I want to look at our muscles."

Different strokes for different folks — if the fitness-obsessed couple are happy with their looks and their lifestyle, everything is fine, right?

Well, Mrs. Matlock's 9-year-old daughter Isabella kind of puts a different spin on things. The bodybuilding parents reportedly only emphasize nutrition with Isabella. "We're still working on Isabella, getting her to be more accepting of eating healthy," explains Mrs. Matlock. The young girl seems to have a good head on her shoulders, which is probably essential with parents like hers. She explained, "I would never really want to get surgery, because it's not really you, like I want to be myself."

Good for her. Honestly, doesn't Dr. Matlock ever feel like he's created some sort of Frankenstein wife? It makes you wonder what Mrs. Matlock would look like today had she not met her perfection-obsessed husband. Yet it seems like they make a pretty good pair: Before seeing Dr Matlock, the future Mrs. Matlock had already undergone three breast augmentations. The fact that this is all happening in La La Land makes it a little more easier to believe, but still, isn't it creepy to want a DIY bride?