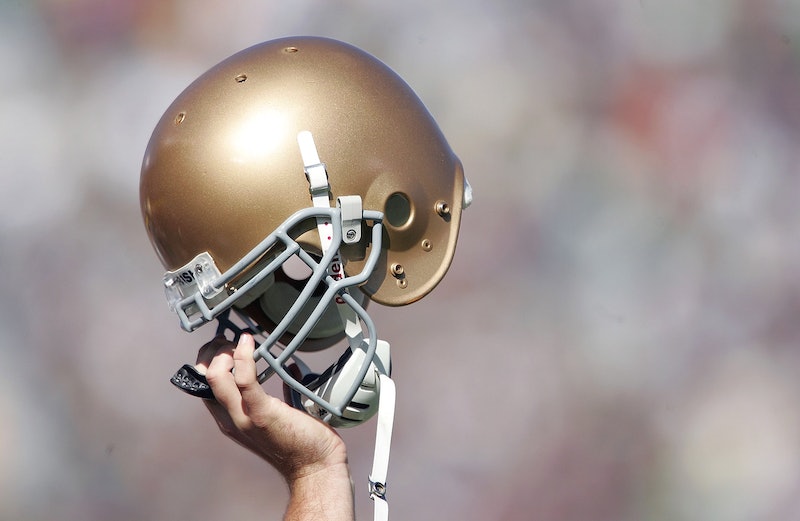 The NFL is pretty preoccupied with its criminal assault and domestic violence cases at the moment, but it might be time to refocus its attention on damage from traumatic head injuries. High school football player Tom Cutinella died on Wednesday after sustaining a severe head injury from a hard tackle during the third-quarter of a varsity football game. Cutinella is the third high school football player to die during a game or practice in the last week.

Newsday reported that Cutinella, a junior at Long Island's Shoreham-Wading River High School, collided with an opponent during Wednesday's game and collapsed on the field. He was rushed to a nearby hospital, where he underwent surgery, but died shortly after. "It was a big hit," Shoreham-Wading River head coach Matt Millheiser told Newsday.

According to the Riverhead News Review, the school district's superintendent released this message to the Shoreham-Wading River community:

Our school community is truly devastated by this awful news and we all extend our deepest condolences to Tom's family and friends during this difficult time.

Wednesday night’s football game against Shoreham-Wading River resulted in the tragic death of Shoreham-Wading River High School junior Tom Cutinella. Tom passed away after succumbing to injuries he sustained during the game. The Elwood School District Board of Education, Administration, staff and community are extremely shocked and saddened about this horrific news and we offer our most sincere condolences to Tom’s family and friends during this difficult time.

According to the Washington Post, Cutinella is the third high school football player to die from a sustained head injury over the last week. Cornerback Demario Harris Jr. of Troy, Alabama, died on Sunday after collapsing on the field during Friday night's football game.

Although Al.com reported that Harris Jr. died because of a ruptured aneurysm in his brain, his father claims his death was caused directly by the hard-hit tackle. In a Facebook post, first reported on by Dothan Eagle, Demario Harris Sr. wrote his son's death was caused by a brain hemorrhage:

My family and me are dealing with a rough situation and we really appreciate everyone’s well wishes and prayers. And contrary to various media reports, my son had a brain hemorrhage, not an aneurysm, that was caused by a hit he took during Friday’s game. He may have had a pre-existing condition, but there is no way to tell now.

On Monday, North Carolina high school football player Isaiah Langston died after collapsing on the football field during a practice before Friday night's game. Although Langston's official cause of death wasn't announced, his brother Aijalon told ABC affiliate WTVD that it was related to a blood clot in the brain. Langston was listed in critical condition over the weekend.

Professional football has faced a concussion crisis over the last decade — more and more former players have been diagnosed with cognitive impairments, memory loss and Chronic Traumatic Encephalopathy (CTE), the latter of which can only be diagnosed post-mortem. CTE, however, is a dangerous degenerative brain disease that can trigger anxiety and depression in former players, leading them to suicide. One NFL player thought to have had CTE is Jovan Belcher, the Kansas City Chiefs linebacker who killed his girlfriend and then himself two years ago.

PBS Frontline, which has been tracking concussions and other head injuries during the NFL season, reported on Tuesday that 76 out of 79 deceased NFL players examined post-mortem had CTE at the time of their deaths. The report was conducted by the Department of Veterans Affairs’ brain repository in Massachusetts. Of the of 128 football players the brain repository has now examined, 101 of the players tested positively for the brain disease.

But brain injuries aren't limited to professional football, as shown by the recent deaths of high school students. According to Frontline, the VA brain repository has looked at brains from players who competed both professionally and semi-professionally — high school and college — and found a link to long-term brain damage regardless of the level of play. "Playing football, and the higher the level you play football and the longer you play football, the higher your risk [of CTE]," said neurologist and brain repository director Ann McKee.

The report said it's still unclear "whether repetitive head impacts and multiple concussions sustained in youth lead to long-term neurodegenerative diseases." However, a study led by McKee and her team at the brain repository has found evidence of CTE in young semi-professional players, including 18-year-old football player Eric Pelly, who suffered multiple concussions in high school and died after taking a hard tackle in a semi-professional game.