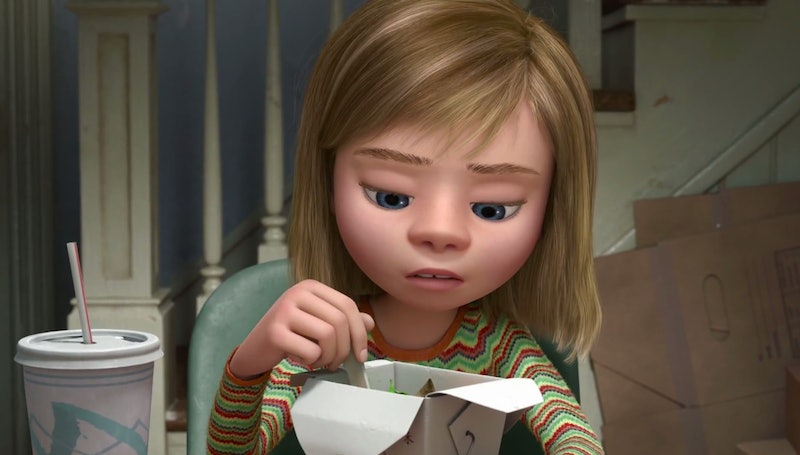 Pixar and Disney have a history of releasing positively adorable, heartwarming films (I know I've cried during more than one of them — though I won't reveal which few because it would ruin my street cred as a grown-ass woman and stuff), and it looks like their next project won't be any different. First indication of that? The first teaser for Inside Out has been released, and even though it's only about 50 seconds long, it does an extremely good job of making you want to start camping out for this movie's release in theaters already.

After a 1-minute intro that weaves together clips from Pixar's other classics — Up, Finding Nemo, Wall-E, just to name a few — we're introduced to a new set of characters from Inside Out: They're emotions personified inside a young girl's head, consisting of Joy, Disgust, Sadness, Anger, and Fear.

Sounds good? It gets better — in addition to all that adorableness, the film also features Amy Poehler, Mindy Kaling, Bill Hader, Phyllis Smith, and Lewis Black lending their voices as the emotions.

Check out the teaser for yourself below. Inside Out will hit theaters on June 19, 2015. Now, if you'll excuse me, I'm going to go watch this a billion more times. I definitely won't be secretly sobbing to myself about how adorable it is, too.

More like this
Everything To Know About 'The Hunger Games' Prequel Movie
By Grace Wehniainen and Radhika Menon
9 Photos Of Margot Robbie & Ryan Gosling As Rollerblading Barbie & Ken
By Alyssa Lapid
Everything You Need To Know About The 'Knives Out' Sequel
By Grace Wehniainen
Is Austin Butler Really Singing in 'Elvis'?
By Arya Roshanian
Get Even More From Bustle — Sign Up For The Newsletter