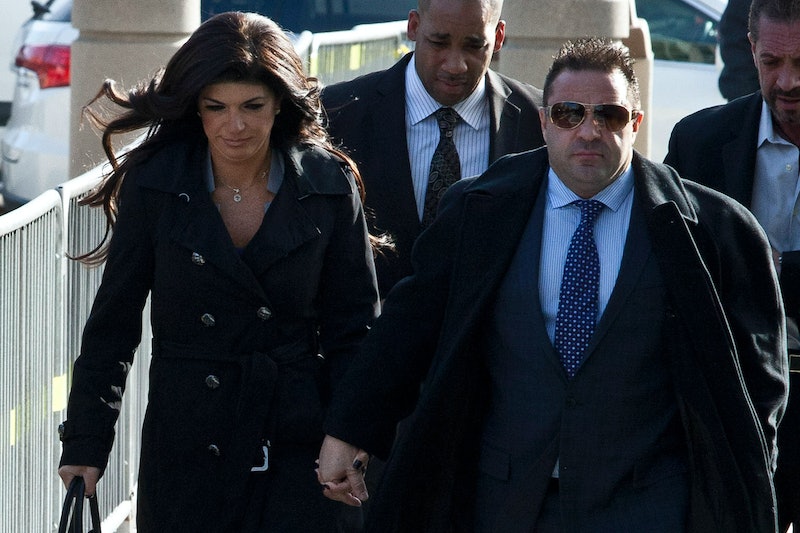 By now, you've probably heard that Real Housewives of New Jersey 's Teresa and Joe Giudice were sentenced to prison earlier today for various fraud and tax charges — Joe for 41 months (a little over 3 years), and Teresa for 15 months.

Though it's a terrible situation, the two of them deserve the punishment they're receiving for their crimes — and, at the very least, it's already been confirmed that the two of them will not serve their sentences at the same time so one of them can be home with their young children (Teresa will reportedly begin serving her sentence first within 30-45 days).

What hasn't really been discussed is how long those sentences will actually be.

Yes, Joe's been sentenced to 41 months, and Teresa 15 months. But these are not violent crimes, and the two of them are (technically, I guess) celebrities: And it's not exactly without precedent that a celebrity is released early from prison after committing a crime due to overcrowding in the system.

For instance: Lindsay Lohan spent 84 minutes behind bars in 2007 after a DUI charge. Paris Hilton was sentenced to 45 days for violating probation and driving with a suspended license — she only served 23 days in 2007. Nicole Richie? She served the least: 82 minutes in 2007, which wasn't even enough time for her to be placed in a cell. Even Floyd Mayweather, who was jailed after beating his ex-girlfriend, was released from prison after serving just 2 months of his sentenced 3 months.

It's possible that the same thing could end up happening with the Giudices, particularly Teresa, since her sentence is shorter. It shouldn't happen, of course, because these two committed crimes and deserve to be punished for them, but there's more than enough evidence indicating they might not be after all.