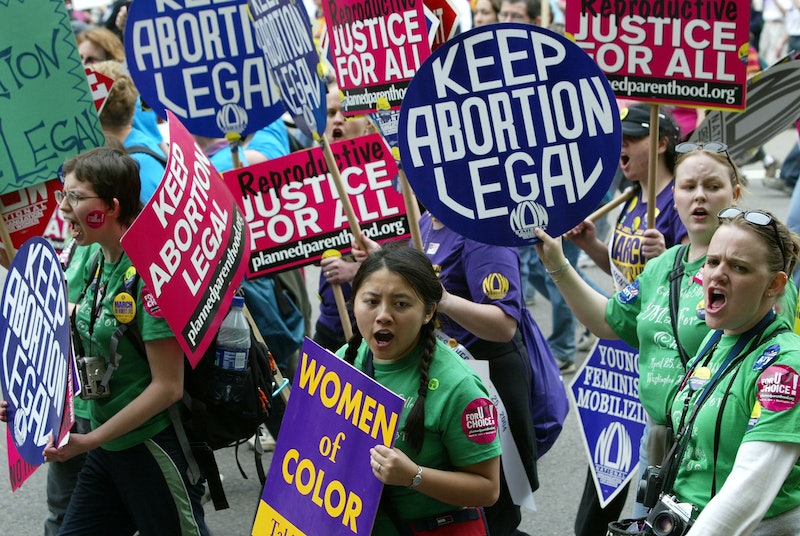 A woman's right to her body just stood a devastating blow. On Thursday, the US 5th Circuit Court in New Orleans ruled that Texas could immediately enforce anti-abortion laws that would close all save seven abortion clinics in the second largest and second most populous state in the union. This decision may single-handedly affect more women's right to an abortion than any previous law. Now, unless the Supreme Court intervenes, it is likely that women in Texas will have to drive hundreds of miles in order to exercise her constitutional right to choose when and where to have a chid. And this is the 21st century.

The contentious law, famously filibustered by gubernatorial candidate Wendy Davis, requires abortion facilities to undergo hospital-level upgrades, meaning they would be mandated to include operating rooms and air filtration systems. This would force more than a dozen clinics across the state to close their doors. Thursday's circuit court's decision stayed an August ruling by US District Judge Lee Yeakel that temporarily allowed these clinics to remain open. According to Yeakel, it was clear that the upgrades requirement necessitated by the new law were "less about safety than making access to abortion difficult."

But now, with the new ruling in place, the only seven abortion clinics that will pass muster with these standards are located in the Houston, Austin, San Antonio and the Dallas-Fort Worth areas. There will be none left along the 1,254 mile long border between Texas and Mexico, nor will there be any outside of the major cities. This means that women who live in McAllen, the largest city in Hidalgo county, will have to drive over 300 miles to have an abortion.

The circuit court justified their opinion by writing, "Women from McAllen have been travelling outside their city for nearly a year." Because apparently, once you've been forced to do something for a year, it becomes constitutional. According to the Center for Reproductive Rights, "nearly one million Texas women will soon face a minimum of a 300-mile roundtrip to access their constitutional right to an abortion" as a result of this decision.

In 2011, there were 62 abortion providers in Texas, 46 of which were abortion clinics. But then number of these facilities have been on the decline in the state since at least 2008. Last year alone, half of the remaining clinics closed their doors, and this latest decision will drive another 13 to the ground. According to the Guttmacher Institute, in 2011, 93 percent of counties in Texas had no direct access to abortion clinics. 35 percent, or 4.5 million Texan women live in those counties.

Following the announcement of the circuit court's decision, Amy Hagstrom Miller, CEO of Whole Woman’s Health and one of the case's plaintiffs told reporters,

Today the Fifth Circuit Court of Appeals ruled on the side of politics, not women’s health. And what we have been fearing is now official: Texas faces a health care crisis, brought on by its own legislators

And this is more than fiery rhetoric — it's a disheartening and dangerous truth.

If current trends and access to proper medical facilities hold, 33 percent of American women will have had an abortion by the time she is 45. And contrary to popular belief that abortions are a tool used by careless, poor young people who are having unprotected sex, the demographics of women who choose to end their pregnancies vary across age, socioeconomic status, and race. 58 percent of women who get abortions are in their 20s, 61 percent already have children, and 73 percent consider themselves religious. 36 percent of these women are white, 30 percent are black, and 25 percent are Hispanic.

But without proper medical treatment, abortions can be extremely dangerous. And given the commonality of abortions across the nation, it would be naive at best to assume that eliminating access to abortion clinics would do away with the number of women who wish to terminate their pregnancies.

In the United Arab Emirates, where abortion is illegal, women suffer extreme consequences when attempting to carry out abortions on their own. Dr. Bashar Abduh, a specialist gynecologist and obstetrics doctor, told UAE's The National that bleeding out is a common risk associated with these backstreet abortions. Abdominal trauma to the intestines and bladder often occurs, as does the rupturing of the uterus. In areas where abortions are illegal or unaccessible, unsuccessful abortion attempts are the leading cause of maternal mortality.

Despite the state's claims that the "decision is a vindication of the careful deliberation by the Texas Legislature to craft a law to protect the health and safety of Texas women," it is clear that the health and safety were the least of lawmakers concerns when they drafted the legislation. Lucy Felix, a patient advocate in the Rio Grande Valley who testified in the circuit court hearing, told judges that "the obstacles caused by the closure of the two clinics in the Rio Grande Valley were substantial for the women who lived there." More importantly, she testified that she had "personally observed an increase in the number of women turning to illegal, self-induced abortion because of an inability to reach the legal abortion clinics."

Though abortions have been legal since the 1973 Roe vs. Wade ruling, it seems that Texas is stuck in a time when covered wagons and gunslinging outlaws were the norm. And if this law is upheld, life for women who wish to have abortions in Texas may soon become as dangerous as the wild, wild West.