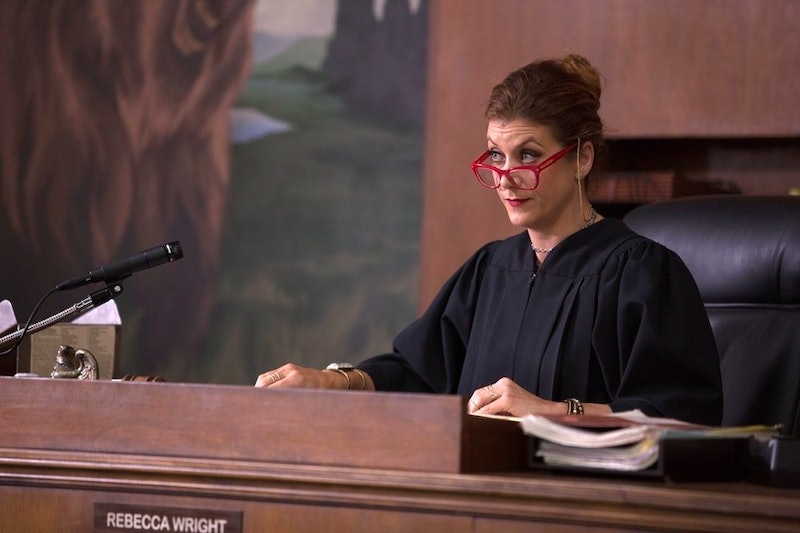 You can almost see the genetic material of Anchorman making up the muscles of NBC's newest comedy Bad Judge. The series, produced by Adam McKay (who made Anchorman, Step Brothers, and the lion's share of Will Ferrell's other comedies) doesn't quite embrace the lunacy of his big screen comedies, but continues McKay's habit of entertaining one age-old trope of the big and small screens: the manchild. However in Bad Judge , Kate Walsh takes on this role.

The episode opens in the midst of a vicious hangover for her character, Judge Rebecca Wright, as she scrambles to get herself in order before the dawn of a workday presiding over court. By the show's 10-minute mark, we've seen Walsh stumble through an unkempt apartment, celebrate the results of a negative pregnancy test, and pursue an ad hoc booty call with psychiatrist Gary Boyd (Ryan Hansen), a regular expert witness in her courtroom.

We've seen women take on this type of character before on network television, but Bad Judge's attitude toward Rebecca is less in line with the shame afforded to the "wild" or "promiscuous" women of sitcoms past than it is with the celebration and benefit of their male counterparts.

Gary, as Wright's love interest, doesn't condemn her lifestyle when he finds out he's hardly her only suitor, simply expressing an interest in further intimacy in the tradition of any of the women pursued by Hank Moody. Wright's bailiff (Tone Bell) offers good-natured ribbing about her fun-loving lifestyle not with judgment or belittlement, but in the fashion we always saw the barflies chide and admire Sam Malone.

Even the antagonistic characters never stoop to decrying Wright for her free-spirited ideologies. Her boss (Michael Sandoval), an ever-looming nuisance for Wright, takes issue only with her insistence on providing extracurricular legal counsel to the families of the men and women she puts in jail. Even her nemesis, a stuck-up lawyer (John Ducey), doesn't resort to cheap shots about her life outside the courtroom; he simply doesn't care for her actions on the bench.

For a broad network sitcom (and Bad Judge is, in many ways, as broad as it gets), these choices are impressive. To watch Wright's character navigate an entire establishing episode of drinking, boorish behavior, and sexual pride without undertaking a single instance of the slut shaming that her ilk of TV character so often unfairly gets is a delightfully surprising ordeal indeed.

Whether or not the show will prove to be funny enough to watch is yet unseen, but it at least exceeded expectations for simple decency.

More like this
Adele’s All-Female Lineup Includes Kacey Musgraves, Mahalia, & Self Esteem
By Shahed Ezaydi
What Is the Net Worth Of Each 'Stranger Things' Season 4 Cast Member?
By Hugh McIntyre
20 Photos Of "Beefy" Jeremy Allen White To Tempt You To Watch 'The Bear'
By Radhika Menon
Everything To Know About The Flash Season 9
By Brad Witter
Get Even More From Bustle — Sign Up For The Newsletter