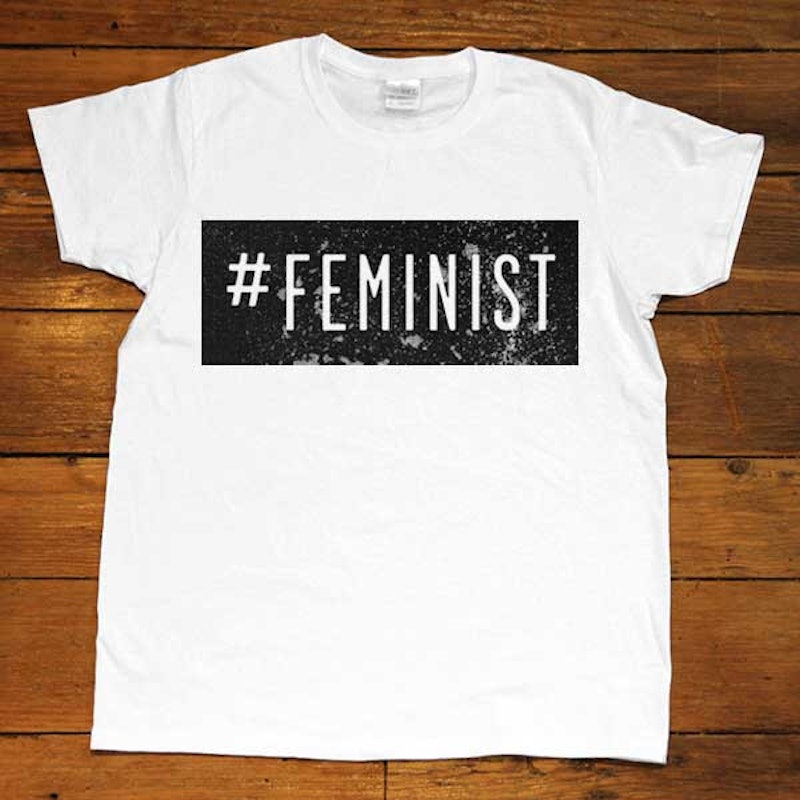 It’s no great secret that rape culture and misogyny permeate the fashion industry (à la Dov Charney or Terry Richardson, patron saints of the patriarchal dick club), but one company is joining the ranks of retailers actively working toward change. Nonprofit clothing company Feminist Apparel aims to raise awareness about gender inequality and tackle the stigma surrounding the word feminism, all through its line of T-shirts. The clothier, which launched late last year, has created an Indiegogo campaign to help expand its current business model and bring on in-house printing in order to keep its products American-made.

“We are of the opinion that the negative connotations of feminism are unwarranted, misinformed, and stem from a present and mainstream culture of dominance; one that does a disservice to women and men alike,” reads Feminist Apparel’s mission. The campaign, which launched yesterday, has raised $2,000 of its $84,000 goal, which the company hopes to meet before November 1.

Feminist Apparel faced some backlash after its initial launch for having similar designs to independent retailers on sites like Etsy, after which the company penned a formal apology to its consumer base. But the bigger controversy may be the fact that the company's founder, Alan Martofel, is a white cis male, something that has earned criticism and could be indicative of the glass ceiling of start-up and fashion industries. Thankfully, the company’s objective still aligns itself with the important aims of feminism, namely gender equality.

Plus, sectioning off feminist allies on the basis of gender is highly problematic and counterproductive to reaching the ultimate objective of gender equality. And this idea is reflected in the company’s mission statement, as well. “We hold the idea that you can be a feminist if you believe in and act on equality,” reads the company’s Indiegogo page. “Men, women, and people who say 'no' to the gender binary are all welcome to the movement.” Amen.

Watch the company's campaign video below, which features a few of its designs being sported by women (and men) while they speak some real truths about what it means to be a feminist.

More like this
5 Ways To Stand In Solidarity With Women In America From The UK
By Sophie McEvoy
How To Fight For Reproductive Rights, Based On How Much Time You Have
By Courtney Young
Lizzo Celebrates Juneteenth With Pan African Flag Dress
By Dominique Norman
Yes, You Can Buy Off-White’s New Beauty Range In The UK
By Tomi Otekunrin
Get Even More From Bustle — Sign Up For The Newsletter