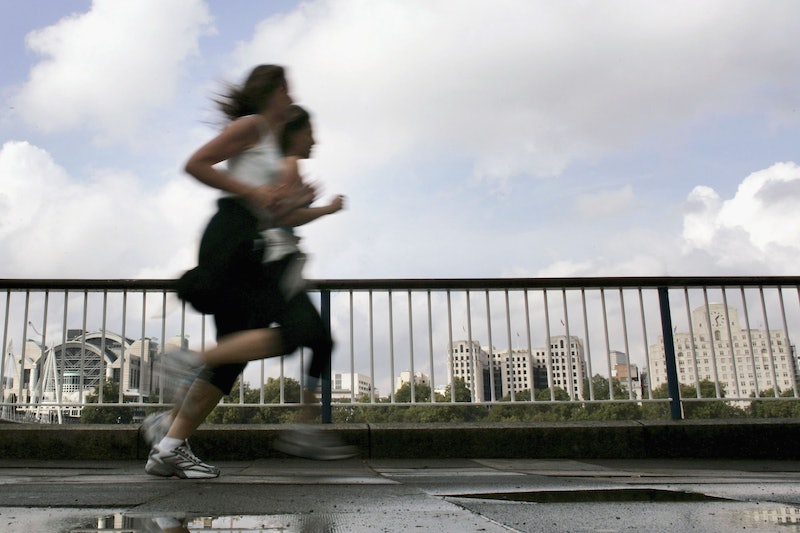 After some workouts, you feel ravenous. But we know heading to the burger joint post-gym isn't the healthiest option. What you eat before a workout can matter just as much, as anyone who's tried eating a burrito before yoga class can attest.

The tendency to equate a really successful workout (like when the screen on the treadmill says you burned 458 calories) with a treat can be misguided. Unfortunately, equating 300 calories burned to earning 300 extra calories is a trap! Those earned calories add up fast and are easily overestimated.

I spoke with experts in a few major styles of sweating to find out what the smartest choices are for before and after a handful of popular workouts, so you can be ready to go and make a healthy recovery afterward your exercise.

Celebrity trainer Alycea Ungaro has worked with Claire Danes, Christy Turlington, and more, plus she can be found teaching at her Tribeca studio, Real Pilates, in NYC.

“Aim for a 100 to 200 calorie pre-workout boost,” Ungaro says. “A small banana plus a tablespoon of peanut butter or an apple with an ounce of cheese makes for a good carbohydrate and protein balance.”

What to eat or drink after your workout should be adjusted depending on the intensity of your workout. If your Pilates session was light, “you'll simply want to hydrate more than re-fuel,” Ungaro says. “I'm a fan of using your thirsty time to drink some green juices if you are otherwise avoiding them.”

Since many green juices are high in sugar without the matching fiber content, but are still replenishing, this is a good opportunity. “If however, you take part in a hardcore Pilates workout, use that afterglow to influence your body’s recomposition. Heavy spring work means you need to replenish your muscles and that means more protein,” Ungaro says. She recommends half a tuna sandwich (with olive oil for those essential healthy fats) or a grilled chicken salad.

Yogi Tara Stiles is the founder and owner of Strala Yoga, taught in schools and gyms around the country in addition to its home in downtown NYC. Stiles is also the author of the upcoming book Make Your Own Rules Diet, a fusion of yoga and healthy eating practices.

Stiles recommends a quick, easy smoothie prior to yoga. She suggests making her signature Green Dream smoothie which gives you “nourishment from the greens and the energy and sustenance to get through your practice,” Stiles says. “Mix 1 banana, 1 big handful spinach, 1 cup almond milk, blend, and enjoy.”

“A big veggie salad is a great and satisfying snack, or a meal, after a yoga class,” Stiles says.

Michael Olajide, Jr. is the co-founder of Chelsea studio Aerospace, and trainer to Victoria's Secret Angels including Doutzen Kroes and Adriana Lima.

Boxing requires strength, endurance, and focus. Olajide recommends a smoothie made with kale, spinach, banana, and almond milk, consumed at least 30 minutes prior to working out.

Swerve is NYC's only team-inspired spin class. Swerve instructor Dyan Tsiumis has the following suggestions for snacks on either end of the ride.

Going into every workout you should be fully hydrated. "Your goal should be to drink half of your body weight in ounces of water," Tsiumis says. (Wow!) "Pre-workout, you want to fuel up with a whole-carb snack, something that's easily digestible and will provide lasting energy throughout your workout. Some of my favorites are whole grain toast with almond butter or a banana."

Post-workout, you should refuel with protein-dense foods. Some of my go-to's are hard-boiled egg whites with hummus (healthy deviled eggs) and protein shakes. Always rehydrate when you're done getting your sweat on, with either coconut water or straight up H20.

Laila Fazel, co-founder of Aerospace, teaches barre classes with a dose of cardio.

If you will be eating your next meal of the day within an hour after the workout, Fazel suggests having "a two-egg omelette with sautéed onions and red peppers with a small green salad." She says, "The protein in the eggs will help restore your muscles after working, while the greens offer up carbs and hydration."

Sadie Kurzban, the 24-year-old powerhouse behind 305 fitness (a dance cardio class in a Miami club setting) has the following suggestions.

An apple or banana is the perfect pre-workout grab-and-go snack. “Carb-rich snacks, especially fruits with fiber, are powerful tools before a workout. Your body quickly metabolizes the sugar and uses it as immediate fuel.” However, Kurzban says, “Warning! While fruits are great, you'll want to stay away from fruit smoothies at all costs. Too much movement in the belly for getting down on the dance floor. Gross!”

Another approved option: Oatmeal. According to Kurzban, a small portion of plain oatmeal is “like workout crack.” It's loaded with carbs that will give you a serious boost in energy if consumed 45 minutes before hitting the gym. Plus, the fiber helps slow down digestion, meaning you can work for longer time periods without crashing.

Kurzban's fave? Milk chocolate-covered nuts. “If I'm going to treat myself,” she says, “I save it for after a tough workout. Sugar consumption will re-set your glycogen levels, meaning your muscles will feel energized, rather than sluggish, the next day.”

Chocolate-covered nuts are what one might consider a “healthy cheat” due to the protein and healthy fat contents. Along that same line of thinking is chocolate milk. "If I'm doing seriously strenuous activity (90 minutes or more of intense dance cardio), I'll grab a glass of low-fat chocolate milk. It has the perfect balance of sugar-protein-fat to replenish my muscles," Sadie says. Finally, another good option is low-fat Greek yogurt with jam. "Greek yogurt has tons of protein, which will help reset your glycogen and help you recover post-workout. The added carbs in jams and fruits will boost your blood sugar levels and leave you feeling fresh after an exhausting workout," Sadie says.

Though many avid athletes have a tendency to turn to "goo" and bars, it's better to seek foods less processed. "Eating things that are processed are more difficult for our bodies to break down, which wastes energy resources it could be putting towards the physical activity itself," Day says. "When doing high-endurance exercise we want to maximize our body's capability to break down food easily and efficiently." Day recommends her patients eat healthy fats and proteins between 20 and 70 minutes before exercise. "Grab a nut butter (coconut butter, cashew butter, or almond butter) and pair that with an easy protein — hard-boiled eggs, grilled chicken, grilled salmon, whatever leftover protein you have in the fridge."