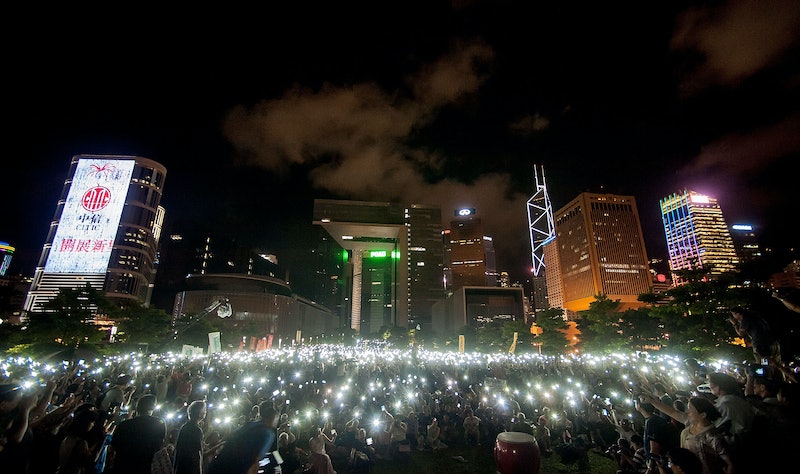 After a week of pro-democracy protests that has captured the world's attention, protestors in Hong Kong are retreating following a handshake deal between a policeman and a protest representative. The move appears to be the first sign of concession from either side of the struggle, but it is still unclear whether the decision to back down will have a significant impact on the protests as a whole. And despite the congeniality of the handshake, tensions remain incredibly high throughout the rest of Hong Kong as the threat of police force against the peaceful protestors grows as the demonstration continue.

The apparent truce comes just in time for the government-ordered Monday deadline for the protestors to clear the streets. Chief Executive C.Y. Leung, the Hong Kong leader, "has laid down the word: Offices have to be accessible by tomorrow morning," a source told the New York Times. This, Leung says, will allow classes to resume and schools to reopen, as well as permit government employees return to work in buildings currently blocked off by protestors.

Those who retreated on Sunday left their posts surrounding Leung's office, a major area of contention in the last several days. TV footage shows the emblematic handshake followed by both police officers and student protestors removing the barricades that have blocked the building's entrance together. The crowd also made moves to allow for leaving vehicles to exit the building, and Time reports that "demonstrators sitting in the road rose almost as one to let them pass." The vehicles' passengers appeared to be young police officers on their way home for the night, and "they gestured thumbs up to the protestors and grinned" in what seems to be a rare show of solidarity and relief.

Protest group Occupy Central also reported that demonstrators retreated from another key protest point in Mong Kok, a blue collar neighborhood that has seen a number of more violent scuffles between demonstrators and angry residents who just want the struggle to come to a close. Mong Kok, a busy shopping area, is packed with stores and their owners, as well as working class members of the Hong Kong society whose livelihoods and income streams have been severely disrupted by the protests.

Over the weekend, many of these residents attacked the protestors, and there have been some reports of gang violence directed against the student demonstrators. The situation was further complicated by protestors' claims that police officers not only neglected to protect them, but actually joined the gangs in working against the protestors. Hong Kong police have fervently denied these allegations, saying they were "totally unfounded and extremely unfair to police officers who faithfully and diligently performed their duty at the scene."

Other protestors expressed concern for the state of Mong Kok residents, as police have been forced to use pepper spray and batons to contain the violence. The Wall Street Journal reports that protestors have meant to leave Mong Kok for several days, and "apologized to nearby shop owners for disrupting their business over the past week." The protests have certainly brought into sharp relief the distinct difference between the educated student populace of Hong Kong who are leading the demonstrations and their poorer, blue collar compatriots who quite literally cannot afford to protest the government.

I am making this appeal from my heart because I genuinely believe that if you stay, there is a risk to your safety. Please leave now: you owe it to your loved ones to put your safety above all other considerations.

No End in Sight

Despite these recent signs of dispersal, not all the protestors are onboard with retreating. Many seem to believe that the government has their hands tied as far as quelling the protests are concerned. The last time police used force in the form of pepper spray against protestors, it backfired completely, as it brought even more demonstrators to the streets to protest what they perceived as an unnecessary display of police brutality.

The umbrellas that were used to protect the students against the pepper spray also created an iconic image that are somewhat reminiscent of the Tiananmen Square protests of 1989. They have even inspired a song called "Raise the Umbrella Together," sung by three performers on Saturday night in an act of defiance.

Moreover, these retreats seem to be more for the purpose of regrouping and reallocating resources than actually pulling back. Soon after Occupy Central's initial tweets announcing a retreat, later tweets suggested that some protestors were returning.

A 16-year-old protest representative told Reuters, "We want everyone to leave because we don't want to see any more bloody conflicts ... we will come back again if the government doesn't respond (to calls for direct talks)." According to CNN reports, some of those who retreated fro Mong Kok have pledged to reposition themselves at another "main protest site on a multilane highway near the government headquarters."

Both sides have accused the other of failing to make key compromises that would allow for meaningful discourse to take place, with the state claiming that protestors should "take a break" and that they are misunderstanding the mechanisms of democracy. Protestors, on the other hand, are rebelling against the heavy-handed Chinese government's encroachment upon Hong Kong's affairs, which has operated under the "one country, two systems" policy since 1997. Matthew Yu, a 15-year-old demonstrator, captured the protest's message, telling the Times,

Now we are students, but in 10 or 20 years, we will be adults and will be responsible for this society. We need to stand up now and speak.

More like this
6 Organizations Fighting Police Brutality That You Can Support Right Now
By Syeda Khaula Saad and JR Thorpe
This Is When Netflix Is Going To Start Charging You For Sharing Passwords
By Darshita Goyal
Here’s Where The NHS Nurses’ Strike Currently Stands
By Sophie McEvoy
The 'Gossip Girl' Reboot Creator Is “Looking For A New Home” To Air A Potential Season 3
By Brad Witter
Get Even More From Bustle — Sign Up For The Newsletter
From hair trends to relationship advice, our daily newsletter has everything you need to sound like a person who’s on TikTok, even if you aren’t.