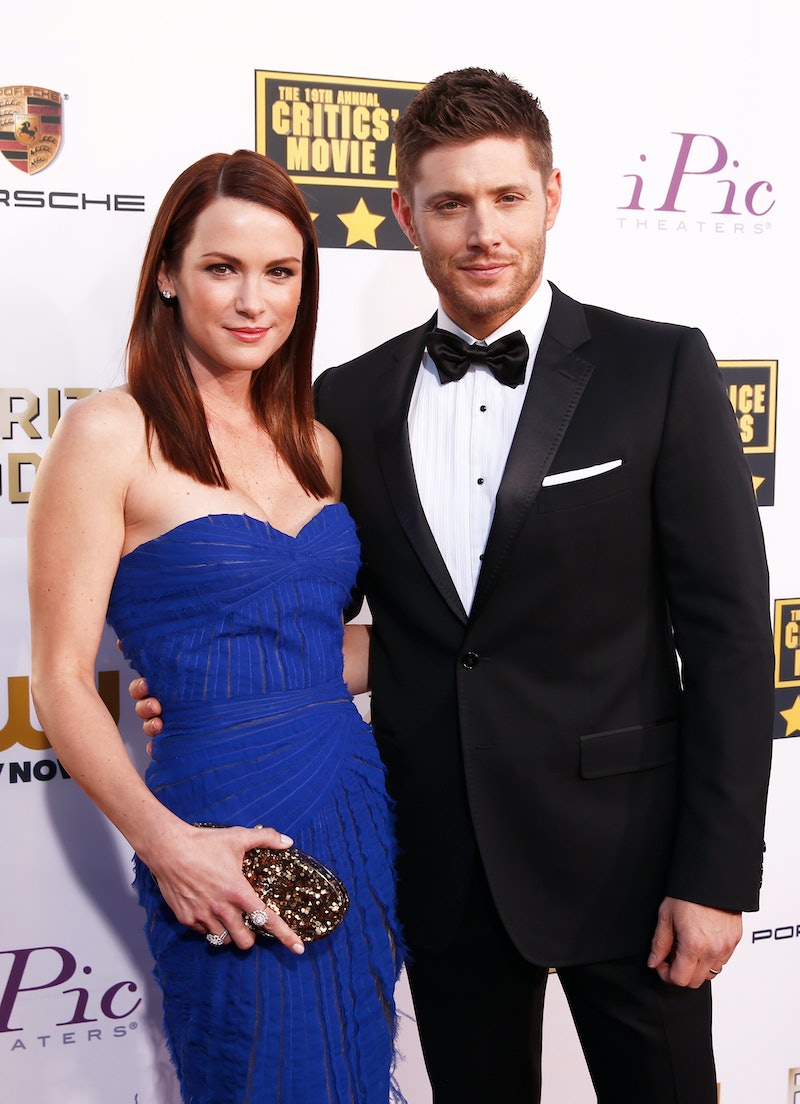 Oh, to be a Winchester. To travel the land, brooding and ridding the world of evil. You might think that, not being born a Winchester, the easiest thing to do would be to marry into the family. So, as the Supernatural Season 10 premiere airs on the CW on Oct. 7, you think to yourself: Is Jensen Ackles married?He most certainly is, to Danneel Harris (now Danneel Ackles), a gymnast, model, and fellow actress. It shouldn't come as a shock that they're married — the two of them have been a couple forever. People reports that Ackles and Harris dated for three years before tying the knot back in 2010.Before that, TV Guide notes that they were friends for close to a decade, having costarred in Ten Inch Hero together, so the proposal was a long time coming. Fans of the show are probably familiar with Harris; she walks with Ackles on the red carpet and goes with him to fan conventions. I'm also pretty sure she helped force Ackles to get on Twitter this past summer. (Thanks, Danneel!) But, if somehow you missed their union, here are some things to know about Mr. and Mrs. Ackles.

The wedding took place at sunset at the Crescent Court Hotel in Dallas, Texas in May of 2010, Celebrity Bride Guide reports. One Tree Hill's Hilarie Burton, Bevin Prince, and Elisabeth Harnois were bridesmaids, and Supernatural co-star Jared Padadlecki was a groomsman. And, like Cortese — who married Padalecki in February 2010 — Harris wore a strapless Monique Lhuillier gown. It must have been tough for Supernatural fans to see both Winchester brothers go off the market within three months of each other.

She's a Fellow Member of The CW Family

Harris is probably best known for being on the CW's One Tree Hill, where she played Rachel Gattina, the cheerleader/model/party girl who eventually married Dan for his money. It's rough being a villain, but since One Tree Hill she's landed other, non-villanous parts, including recurring roles on Friends with Benefits and How to Live with Your Parents (For the Rest of Your Life). You can also catch her in a music video or two, like the one she shot for Sandra Lynn's "You Belong." Still, at one time, it was possible to see both halves of the Ackles couple on The CW within the same week.

They Have a Baby Girl

Harris' Brother Is an Expert Tweeter

Mostly, it's just fun to see the way he heckles Danneell and Jensen for not tweeting enough. (We feel the same way, Gino!) At least he seems tickled by his sister and brother-in-law's fame, and how easy it is to come across episodes of Supernatural at the gym.

More like this
Here’s What Happens To Bill & Frank In 'The Last Of Us' Video Game
By Brad Witter
Wait, Is Barney Stinson Related To Sophie On 'HIMYF'?
By Gretchen Smail
This 'One Tree Hill' Wardrobe Error Is Going Viral On TikTok
By Brad Witter
Keyla Monterroso Mejia Is Finally The Star Of The Show
By Gabrielle Bondi
Get Even More From Bustle — Sign Up For The Newsletter
From hair trends to relationship advice, our daily newsletter has everything you need to sound like a person who’s on TikTok, even if you aren’t.