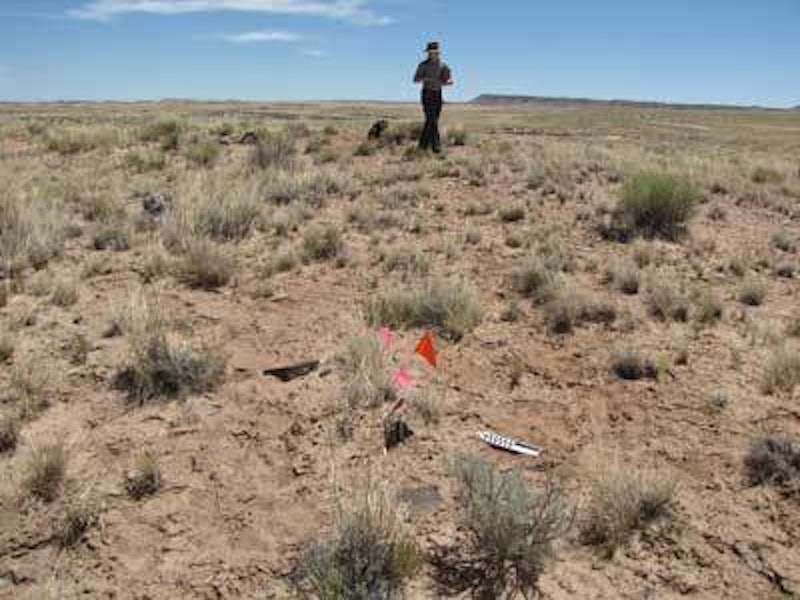 Call me a geek if you will, but I don't care — isn't there something awesome and wonderful about learning new things about the history of the world? Even more so when you can learn something about the centuries-old histories of now-desolate lands, which is exactly what archaeologists in Arizona were able to achieve, as it turns out. They've discovered long-lost village ruins in Arizona's Petrified Forest National Park, and it's a fascinating glimpse into the pre-history of the American southwest.

The villages are believed to be remains of the so-called Basketmaker culture, which existed to varying degrees for centuries in the prehistoric American southwest. Arizona and New Mexico are both home to rich histories of indigenous populations, and in some places, it's evidenced quite dramatically — as Archaeology's Keith Kloor detailed in 2009, the arresting Kin Klizhin site in northwestern New Mexico speaks to the past residency of these Ancient Pueblo populations.

In the case of this most recent discovery, in the expanse of Arizona's sprawling petrified forest, the discovery was made in stages. As expertly detailed by Western Digs' Blake De Pastino, the park archaeological team, led by William Reitze, discovered remnants of what they figured to be from 50 to 75 demolished structures last year. And this summer, they decided to go back for more.

Last year we found a large habitation site, and this summer we found a match, less than a mile away, a site that has dozens and dozens of different features. We have now two large groups of pithouse structures, both of them with probably more than 50 structures associated with them.

As Archaeology details, the team discovered relics of the past that dated the structures back about 1,300 years — so, that'd be about 714 A.D., for some perspective. The expected architecture of this early southwest era was on full display, with sandstone floor and wall sections unique to the area, and they found some beautifully carved stone tips as well. That near-700 A.D. timeframe suggests that the archaeologists have discovered remnants from a pivotal time in the history of these indigenous cultures — it's about that time that the Ancient Pueblo communities began to establish permanent settlements, rather than existing nomadically.

As Reitze told Western Digs, the proof is in the pudding, so to speak — the size and intricacy of the remains alludes to a culture trying to settle in, rather than staying on the move.

... they’re investing more in building structures. There are more folks in the same place. They’re maintaining these structures for longer periods of time. They’re probably also making that investment in the landscape, with agricultural fields, water control features — you’re seeing more investment like that.

Reitze is reportedly seeking radiocarbon dating to pin down the age of the sites with more accuracy, but even absent that certainty just yet, it's undeniably an interesting find. Not a bad bonus for roaming through the petrified forest, huh?