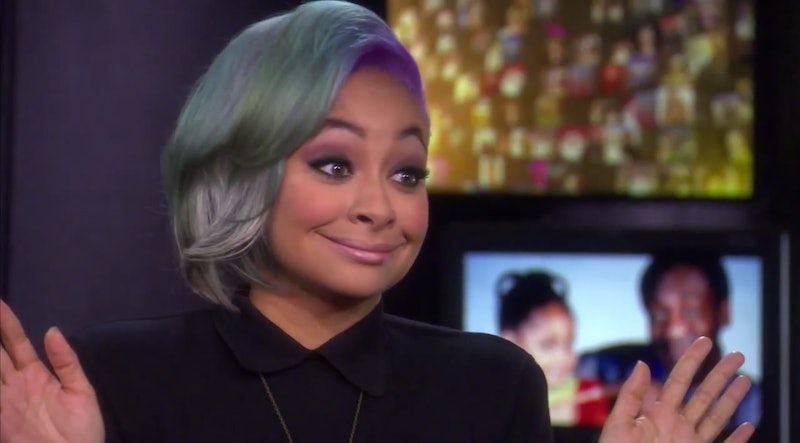 If you're like me and most of America, then you grew up watching The Disney Channel and have very fond memories of That's So Raven, starring Raven-Symoné in the title role as a teenage psychic whose visions didn't always come true the way she saw them. However, in her post-That's So Raven career, Raven-Symoné has a bit of a reputation for bluntness that borders on harsh or offensive. For example, Raven-Symoné made passive-aggressive remarks about fellow child stars in the first teaser from her Oprah: Where Are They Now appearance. In the second teaser, she took it a step further. Apparently, Raven-Symoné doesn't want to be labeled an African American.

It's important to consider what she was trying to say before we discuss how she flubbed her point. Raven-Symoné doesn't want to be labeled at all. Oprah asked her about her rumored coming out on Twitter in 2013, when she said in response to the legalization of gay marriage: "I can finally get married! Yay government! So proud of you." Although she is currently in an "amazing, happy relationship" with her female partner, model AzMarie Livingston, Raven-Symoné made it clear that tweet was not her coming out as gay. That tweet was not her coming out as anything. She's not categorizing herself at all.

"I don't want to be labeled 'gay.' I want to be labeled 'a human who loves humans,'" she said, which was fair enough. Sexuality is such a broad spectrum that, despite the multitude of labels that try to cover as many different points on that spectrum as possible, there still isn't a word to cover everything. Many people just like what they like and Raven-Symoné is clearly no exception. To force her into a box for the benefit of our own understanding of her sexuality would be unfair to her.

Hold up. Wait a minute. Rewind. Pause. What? Oprah cautioned Raven-Symoné that she would receive a lot of flak from people, especially on Twitter, for saying that she wasn't African American, but shockingly that isn't my whole problem with her statements. In the first place, the kind of circuitous logic that allows Raven-Symoné to say that because she doesn't know what country in Africa her roots go back to then she doesn't consider herself African American is confusing. She clearly knows enough to know that her roots do go back to Africa, so why is she disavowing the continent entirely? And isn't American just another label?

Still, that's her choice to define her own ethnicity. The truly offensive part of her explanation is her assertion that an American is a colorless person. That's what I would call "cultural erasure", a backward return to the oh-so-familiar statement of "I don't see color" that can be just as racist as judging people based on their skin color because it ignores the diverse backgrounds that each and every single American hails from. Being American doesn't erase your cultural heritage; it does not make you "colorless". America's cultural heritage is that it's a blend of cultural and ethnic heritages, making for a colorful patchwork quilt of people who all fly under the banner of American.

Predictably, Oprah was right. Fans on Twitter were not pleased with Raven-Symoné's words:

At the end of the interview, Raven-Symoné states that America is supposed to be a bunch of people who are a melting pot in one body, which is yet another statement that contradicts her apparent statement that she wants to be seen as colorless. Listen, I'm not saying that I have any kind of right to tell Raven-Symoné how she wants to identify herself ethnically. There are so many biracial and multiracial Americans who can't fit the number of ethnicities that have blended together to create them on a single government form, so it's not like I'm going to tell them, or Raven-Symoné, to pick one and fly that flag.

However, it's offensive to me as a woman of color that she would denounce her entire ethnic background to be considered American, as if African Americans are somehow less American than other American-born cultures, and it's offensive to me as an American that she would denounce the ever-present struggle for racial tolerance by saying that Americans are colorless. I understand what Raven-Symoné was trying to say about not wanting to be labeled, but making that point by labeling America as a place that erases your color was the wrong way to go about it. America is a place that should be about celebrating our different ethnicities, not ignoring them or judging each other based on them. I wish Raven-Symoné had recognized that better.