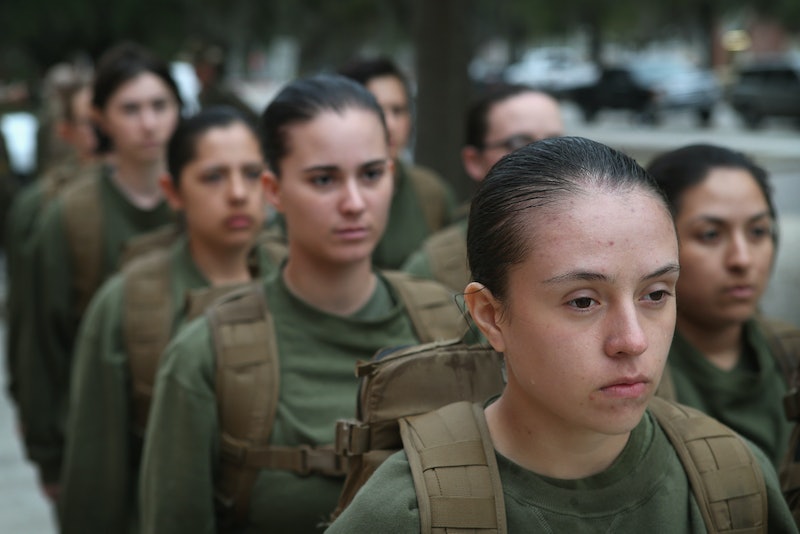 Three female officers have passed the Marine Corps endurance test in Quantico, VA, and the Internet is once again buzzing about the future of women in the military. The subject has been a hot-button issue in the media for many months, and particularly last year when the Pentagon officially lifted the ban on women in combat. Still, there is a long way to go before women can actually be sworn in as formal members of the infantry. The aforementioned combat test was part of an experimental trial conducted by the Pentagon to determine what positions women should be allowed to assume in combat. It comes just months after a study at Fort Stewart in Georgia where the combat readiness of 60 female soldiers was put to the test. During the study, the women underwent tasks such as loading 65-pound missiles while suited in 70 pounds of body armor.

This installment of the Infantry Officer Course was equally as demanding, and tested the soldiers' ability to make difficult decisions in the midst of grueling physical conditions. Alongside 93 of their male counterparts, seven women tried their hand at the endurance test, with only two female captains and one female lieutenant making the cut. It was the latter's second attempt, having failed to pass the course last July. Aside from these three officers, only one other women has passed the endurance test in 2012, although she was unable to continue with the course after suffering stress fractures in her foot.

Whether or not these women are able to graduate from the infantry program, however, their presence alone marks a paradigm shift in terms of the way female offers are perceived both inside and outside of the military. Their performance proves that women are capable of withstanding some, if not all, of the same physical conditions as men despite the fact that things like the pull-up test may be skewed against them.

Setting physical aptitude aside, some female marines are also attempting to shatter the popular media aesthetic of women in the military by posting a selfie on Instagram that displays real women in uniform. Whereas previous promotional materials used striking female models to encourage women to join the Army, there has recently been a push to include the likes of everyday women in these types of ads. Of course, image is only a small part of the battle to one day reach a point where women are fully integrated members of the military and all its available positions.

As of now, the unfortunate truth is that the notion of women in combat is still met with heavy criticism. Some have expressed heavy reservations about women's ability to perform in high-stress situations, while others fear that certain "privacy issues" may arise. In an Op-Ed for the Wall Street Journal entitled "The Reality That Awaits Women in Combat," former Marine infantryman Ryan Smith writes:

It would be distracting and potentially traumatizing to be forced to be naked in front of the opposite sex, particularly when your body has been ravaged by lack of hygiene. In the reverse, it would be painful to witness a member of the opposite sex in such an uncomfortable and awkward position. [...] The relationships among members of a unit can be irreparably harmed by forcing them to violate societal norms.

Contrary to what Smith argues, however, many find nudity to be uncomfortable regardless of gender or sexual preferences, and some have no qualms about it at all. What matters is not whether men are comfortable with the potential "awkwardness" that accompanies one's membership in the infantry, but whether women feel willing to enter into these scenarios. And if the three women who passed their Marine Corps endurance test last Thursday have taught us anything, it's that women are less concerned with these types of "uncomfortable" situations and more concerned with their ability to serve and protect their country. This priority is highlighted by Rep. Duncan Hunter, R.-Calif. in a statement to USA TODAY:

In the end, when all is said and done, what they should be focusing on is combat effectiveness. Does it make us better at literally killing the enemy? That's what their job is going to be?

Sen. Kirsten Gillibrand, D-N.Y. also tells Stars and Stripes that women have already proven themselves to be ready to meet this challenge:

Women are already fighting and dying for our country shoulder-to-shoulder with their brothers in uniform on the frontlines, but without the formal recognition that is essential for them to advance and obtain the benefits they have earned. Officially recognizing women in combat will strengthen our country both morally and militarily.

As with any paradigm shift, it only takes one woman to pass the likes of the Infantry Training Course to change the culture surrounding female officers. Once it has been proven that women are equipped to undergo the same challenges as male officers and offer equal protection for our country, it is only a matter of time before the current, gender-based barriers to entry are dissolved. Perhaps it is even a matter of days. As the three woman who passed the endurance test prepare for the next step in their Infantry Training Course, they offer the promise of a brighter future for women in the military. But even if they are not entirely successful this go-round, these women have set the stage for fellow female officers to access their fullest potential in the service of a country they so dearly love.