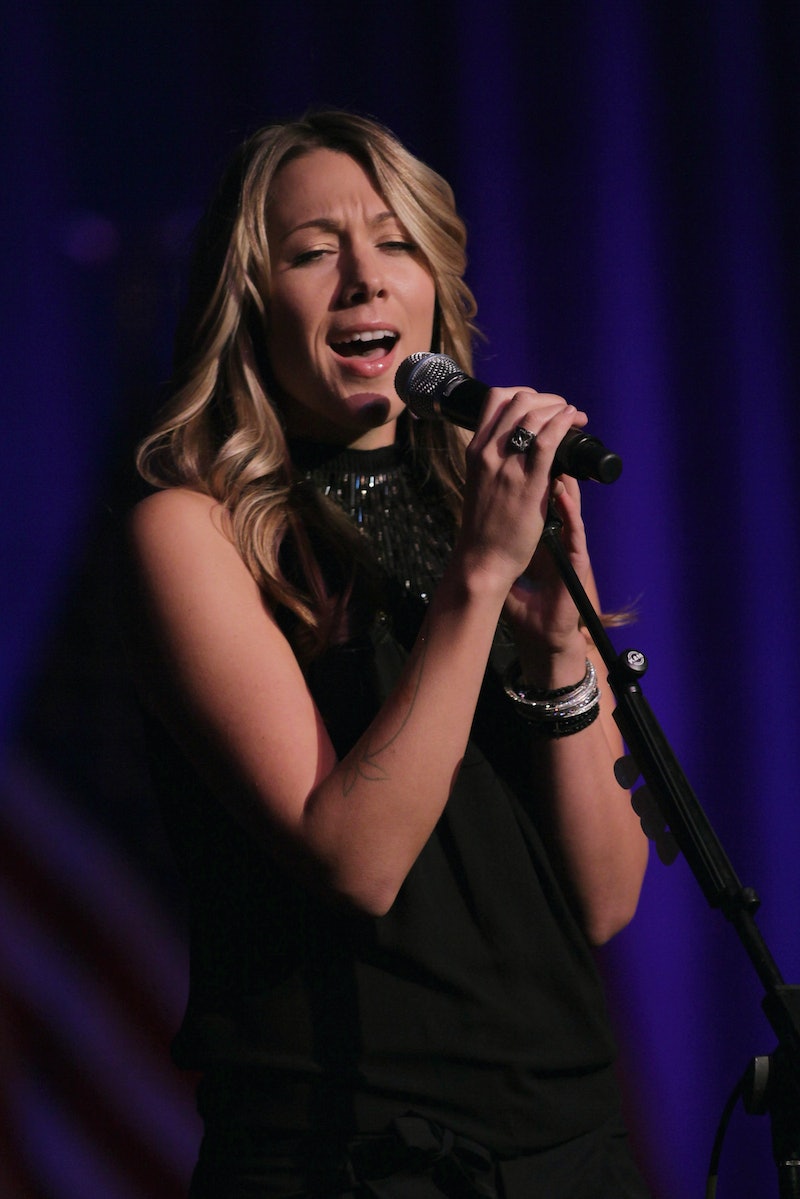 "Smelly cat, smelly cat, what are they feeding you? Smelly cat, smelly cat, it's not your fault." Alright, who hasn't sung along to Phoebe Buffay's coffee shop favorite whenever they watch a rerun of Friends? Well, a famous singer-songwriter took it one step further and fulfilled every Friends fanatic's fantasy. Colbie Caillat performed "Smelly Cat" at the pop-up Central Perk in New York City over the weekend. Caillat called the moment "cool" on Twitter and called Friends her favorite show ever.

While the Grammy-winning artist sounded great (as per usual) singing the song made famous by actress Lisa Kudrow, there was one fatal flaw in her performance: She didn't complete the whole song! Yes, it's true, there's lyrics beyond that memorable "Smelly Cat" chorus. The middle of the little ditty goes as follows:

"They won't take you to the vet/You're obviously not their favorite pet/You may not be a bed of roses/And you're no friend to those with noses." (Can't you just hear the rest of the Friends characters singing along to this? Well, except for Ross, because those are all the lines.)

Still, even if Caillat didn't perform "Smelly Cat" in its entirety, she still did right by Phoebe Buffay. See for yourself:

After watching Caillat's awesome rendition of "Smelly Cat" it became glaringly obvious that during the 20 years of Friends, something has been missing: a Pheobe Buffay tribute album. Sure, the show had its own soundtracks (including 1999's Friends Again album, which featured the "Smelly Cat Medley" from Phoebe Buffay and the Hairballs) but Phoebe was such an influential songstress, it's about time she gets her own folk/singer-songwriter tribute album.

While Caillat would clearly get "Smelly Cat" for the album (though there'd obviously be a "We Are the World"-esque sing-a-long featuring all the artists on the record), here's some suggestions for who could cover some of Phoebe's other greatest hits.

One of Phoebe's most inappropriate tunes (and that's really saying something), this little number deserves a singer who has no shame. Sounds like the perfect opportunity to Miley Cyrus to show off her famous pipes and rub people like Ross the wrong way.

Phoebe's cautionary tale about the horrors of the meat industry could have some extra gravitas if sung by an outspoken vegan like Leona Lewis. (Bonus: she could also cover Phoebe's anti-dairy number.)

As far as Pheobe's songs go, this one is kind of a bummer. This sounds like a mission for Bon Iver.

Sara Bareilles was awfully encouraging in her song "Brave," so she could definitely inspire/motivate some fetuses, too.

If Jack Johnson can make a whole album devoted to teaching kids about kindness and sharing, he could definitely sing Phoebe's step-by-step shower guide.

Chandler's verse wouldn't sound so mangled, rather it would be moody and melodic if Imogen Heap covered it.

"Two of Them Kissed Last Night"

Christina Perri had a famous song from one of the Twilight soundtracks, which means she knows a thing or two about crooning over love triangles. Team Julie > Team Jacob.