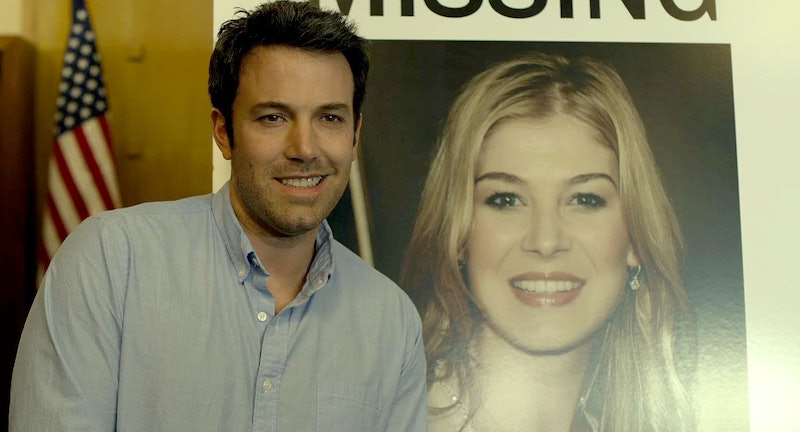 I was enthralled by Gillian Flynn's 2012 novel Gone Girl, but, like so many readers of the marital mystery, I was less-than-pleased with the lackluster conclusion. Though the middle of the book moved along at the speed of a freight train, the final chapters seemed to lose steam, concluding the novel with a tragic, almost epilogue-like ending. Many fans, including myself, were disappointed by the Gone Girl's conclusion, which I am about to tell you about right now so stop reading right this second if spoilers aren't your thing. Amy returns home to Nick, and tells him that she wants to make their very messed-up marriage work, despite that whole "I-faked-my-own-murder-to-frame-you" thing. Nick refuses — he's ready to leave his sociopathic wife immediately — until Amy whips out her final surprise: She impregnated herself with his sperm from the fertility clinic. Nick finally agrees to Amy's terms, and decides to stay married to his horrible wife. And then the book ends.

There's something poetic about the ending of the novel, but that doesn't make it particularly satisfying. That's why it was so exciting when the Gone Girl author and screenwriter Flynn announced that she had written a new third act of the story for the film, which fans assumed meant a new ending (and therefore different fate) for Nick. But don't get your hopes up like I did — Nick's fate is sealed.

The differences between the ending of Gone Girl, the film, and Gone Girl, the book, are miniscule. The film concludes with Amy and Nick going on television to announce Amy's pregnancy, as opposed to in the book, when it's a more private matter. But did Flynn actually lie to us about altering the ending of the novel? Not as much as outraged fans might believe. After all, Flynn's major quote about the altered ending isn't even directly from her — in the Entertainment Weekly cover story she cites star Ben Affleck as having been "shocked" by the new version — but that doesn't necessarily mean she wrote an entirely new ending.

In fact, Flynn's Reddit AMA suggested that reports of the new ending were "greatly exaggerated" — a disappointment to fans who wanted Nick to get revenge on his former beloved in the film version.

Ultimately I am disappointed that Flynn didn't beef up the ending of the film, even if she does believe that Nick's fate as Amy's unhappy husband is the only one appropriate. I would have loved for the film to have ended with a flash forward of Nick, Amy, and their child — a picture of suburban happiness that only the audience knows is a huge facade. In fact, that's what I was expecting from the ending — not so much a different sentiment, but just something more. Unfortunately, the fact that this ending was what Flynn wanted for both the novel and the film, dissatisfied fans like myself will have to learn to cope.