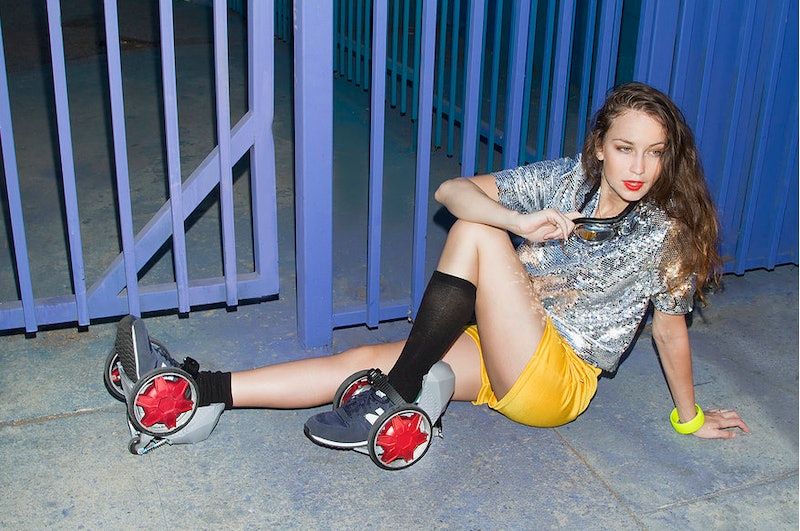 The Internet has picked some really bizarre things to get behind. And by bizarre, I mean that there was a successful campaign to fund a young man who wanted to make potato salad. Meanwhile, in the land of useful ways to spend your money, Kickstarter has fully funded ACTON RocketSkates, which are motorized skates you strap onto your shoes. DREAMS REALLY DO COME TRUE.

On Aug. 22, the good people of the Internet hit ACTON's funding goal of $50,000, but because everyone collectively realized that they made a huge mistake by funding the backyard culinary adventures of someone who has never made potato salad, they just kept going. Seriously, Internet, I was worried about you. ACTON has pulled in over $500,000 for RocketSkates, with sold-out donation levels in the $299 and $499 range that include a pair of the magical skates. But hey! If you have a spare $10,000 lying around you can still donate and get 10 pairs of the skates, lunch with the creator, and key chains!

So how did they pull all of this money? In short, because these skates are awesome. You simply step into the skates, strap in (it doesn't expressly say this, but I doubt they are compatible with heels based on the design), and go! They are controlled by your feet, with a simple tilt forward to accelerate and a lean back on your heel to brake. They are also equipped with a foot plate if you, for some reason, have the desire to stop rolling around like your are from the future and walk up stairs.

Here they are as modeled by ridiculously hot people:

The only downside is that the rechargeable batteries on the base model (R6) only have 45 minutes of life, with the max number of minutes, for the R10, has 90 minutes. And with models ranging between $499 and $699, it may not be the most fiscally conservative choice for alternative transportation. Practical? Maybe not. Awesome? Most definitely.

The California-based ACTON has also made a compact, three-wheel motorized scooter which is not nearly as cool as MOTORIZED EFFING SKATES, but still convenient for busy commuters.

If you're ready to take the plunge and be the coolest kid on the block, you can pre-order the RocketSkates on ACTON's site for a a November or December delivery date.