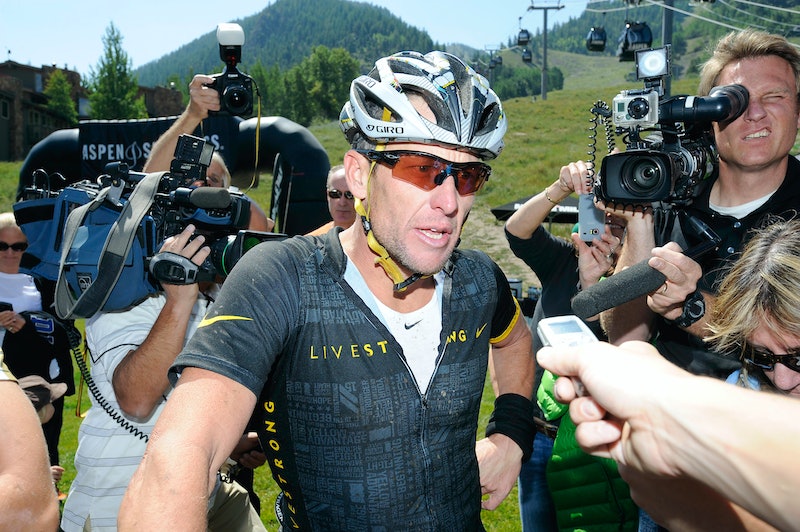 This is not news. Or, rather, it is the reason we have news. Go ahead and check today’s headlines. I’ll wait.

But over the past decade or so, this widespread compulsion to lie has leaked into the memoir genre — one that is ostensibly committed to telling the truth. Even when (or especially when) the truth is not pretty.

The memoir has a long, fascinating history, brilliantly outlined by the New Yorker critic Daniel Mendelsohn. He pegs the memoir as “the black sheep of the literary family,” consumed with “the overpowering need to be the center of attention” even as it airs its own dirty laundry for all the world to see. The big question is, of course: Why? Why would one write a memoir — and why would we read it?

Perhaps writing about one’s life — complete with all of its successes, failures, misdemeanors, and petty details — helps bring much-sought after meaning to it. You could say that a certain 4th century bishop by the name of St. Augustine got the ball rolling with Confessions, in which he details his rowdy youth as it leads up to his present-day life as a man of God. Penning Confessions allowed St. Augustine to come to terms with his troubled past and, in the process, ascribe meaning to the struggles in his life. As for the audience: Readers can apply the lessons learned by the memoirist to their own lives, gaining strength from the knowledge that someone — a real-life hero — has forged a successful path despite obstacles big and small.

Jumping ahead about 16 centuries, many of the more popular memoirs describe struggles that come about as a result of neglectful, abusive, or difficult parents, and others delineate struggles that emerge from the author's confronting his or her own inner demons. Regardless, we want our memoirs to have happy endings — an expectation they often fulfill, given that the writers in question desire to demonstrate precisely how they overcame such obstacles. Even if they don't ride off into the sunset by the book's final page, we know that, at the very least, they managed to land book deals, and that’s more than most of us can say for our lives.

Many memoirs follow this framework to a tee, with scenes of struggle and redemption that are self-contained within the book, just like any other novel. A sampling: Journalist Jeannette Walls released The Glass Castle in 2005, documenting her outrageously unfortunate childhood (complete with an alcoholic father) and her eventual escape into adulthood. In 2002’s Running with Scissors, Augusten Burroughs recounts his outrageously unconventional childhood (complete with an alcoholic father), in which he is sent by his mother to live with her psychiatrist, and his eventual escape into adulthood. Joan Didion attempts to make impossible sense of unthinkable tragedy in The Year of Magical Thinking, and Elizabeth Gilbert’s bestselling Eat, Pray, Love — subtitled as “one woman’s search for everything […]” — describes Gilbert’s determination to find satisfaction in her life, wherever in the world it may be. And sometimes, in the face of adversity, the only thing left to do is laugh, which creates room on our bookshelves for humorist David Sedaris’ Me Talk Pretty One Day and Mindy Kaling’s Is Everyone Hanging Out without Me? (And Other Concerns), among others.

But these rags-to-riches tales of redemption aren't wholly idealistic. Memoirists — more so than other writers — undoubtedly fall prey to one of 21st century America’s most pervasive epidemics: narcissism. No matter which way you slice it, the word “memoir” screams “Look at me, and all that I've accomplished!" (with perhaps a smidge of “And you can do it, too!” in barely-legible script right below).

Incidentally, this claim of narcissism is also tied to claims of mendacity and falsehood, specifically in reference to disgraced cyclist Lance Armstrong’s “memoirs” It’s Not About the Bike and Every Second Counts and Greg Mortenson’s Three Cups of Tea. When Armstrong finally confessed to doping after a decade of suing off everyone’s pants for libel, the tables turned faster than he could say “Oops." (As of Tuesday, Armstrong finally settled with the newspaper that sued him right back after his deceit was finally revealed.)

Mortenson’s pre-scandal saga was just as heartwarming and Armstrong’s was. After an attempt to climb K2 leaves him weak and disoriented, Mortenson was nursed back to health by members of a Pakistani village. To repay the villagers’ kindness, he vowed to return and build a school for the village. Mortenson set about establishing the Central Asia Institute (CAI) as a means of setting up dozens of schools in Afghanistan and Pakistan, and he has been a tireless advocate for girls’ education in these regions.

But a 2011 60 Minutes program revealed that Mortenson compulsively mishandled his charity’s fund and that many of the more dramatic scenes from his book were completely fabricated. Ex-Mortenson admirer Jon Krakauer wrote his own 22,000-word exposé on the matter, appropriately titling it Three Cups of Deceit. In a follow-up piece for The Daily Beast, Krakauer further explains the extent of Mortenson’s, well, deceit:

The heartwarming story about Mortenson building his first school to repay the kindness of destitute Pakistani villagers who’d nursed him back to health after he stumbled, lost and emaciated, into their community? It was an elaborately concocted fable. The chapter describing Mortenson’s harrowing eight-day abduction by the Taliban, in which he revealed that his impending execution didn’t seem like “such a bad way to go,” but he was troubled by the fact that his pregnant young wife would never know how he died? A figment of Mortenson’s imagination.

Mortenson’s misdeeds go further than merely stuffing his memoir with blatant lies in order to make himself seem more like a true-life hero. He also utilized CAI funds (including donation dollars) as “his personal ATM,” using the money to pay for personal items such as clothing and iTunes music, and spent millions on private jets for speaking tours.

In sum, the entire image of Greg Mortenson — shortlisted three times for the Nobel Peace Prize and hailed as a “real-life Indiana Jones” — is as fake as the fraudulent scenes from his book.

The Armstrong affair is a similar case, but on an even larger scale. The seven-time Tour de France-winner embodied the ultimate paradigm of the unconquerable nature of the human spirit. His hero status was made even loftier by the fact that he had to overcome cancer to accomplish this feat. And while his conquest of humankind’s most infamous epidemiological enemy remains, all of the rest of his accomplishments have been irrevocably tainted. Not only did he cheat, but he bullied others into cheating, and bullied them into submission if they threatened to reveal his duplicity. Thus, the driving force behind Armstrong’s memoirs — that he exemplifies the zenith of human determination — is revealed to be a big, fat, ugly lie.

And who could forget the hapless James Frey, who instigated a firestorm (one that took the form of a very peeved Oprah Winfrey) when it was revealed that his “brutally honest,” “unflinchingly real” 2003 memoir, A Million Little Pieces, was riddled with fabrications? Who could forget that he originally billed it as fiction?

Frey’s case, though, is far less insidious than Armstrong’s or Mortenson’s; sympathy can still be summoned on his behalf when considering that exaggerating details of his drug- and alcohol-fueled life might be a way of validating the deep (emotional and physical) pain that didn’t quite match up with the objective reality of his life. Plus, although Frey did lie about his experiences, the core of his character remains intact. Armstrong and Mortenson’s lies, however, undercut the very essences of their memoirs — and of their public images as inspirational figures. In fact, Ph.D Joseph Burgo diagnoses both with psychiatric narcissism in his book, The Hero as Narcissist: How Lance Armstrong and Greg Mortenson Conned a Willing Public. (Yep, that fascinating study actually exists.)

In a black-and-white world, what it boils down to is this: Armstrong lied. Mortenson lied. Frey lied. And while we Americans cherish our First Amendment right to freedom of expression, memoirists are, strictly speaking, contractually obliged to tell the truth, as befits the very definition of this genre.

Yet, we tend to view the Armstrong and Mortenson cases as inherently different from the Frey situation, the reason for this being that the super-human, Cancer-kicking cyclist and the selfless charity man were supposed to be squeaky clean heroes, whereas Frey’s whole appeal was his damaged, everyman personality.

Burgo, author of The Hero as Narcissist, cautions us against idealizing public figures such as Armstrong and Mortenson, noting that “we fail to see them as human beings with some outstanding qualities [who are] flawed and fallible like the rest of us in other areas.” That is, we shouldn’t differentiate between Armstrong/Mortenson and Frey. However, Armstrong lied compulsively and systematically for decades, only admitting to his PED-use and bullying when he was finally backed into a corner (and even then, only admitting to his wrongdoing while barely offering a convincing apology), while Mortenson continues to deny any wrongdoing on his part. Perhaps Burgo’s allegations of narcissism aren’t so far out of left field; perhaps what we really want from our real-life heroes is the exact opposite of what being a public figure entails: humility. Given Armstrong's shamelessness and Mortenson's continued denial of any guilt on his part, humility is exactly what they lack. This is because, of course, a "humble narcissist" is a contradiction in terms. As the well-known irony goes, the person who is most suited to be a leader and a role model is too modest to do so. (Or, as Douglas Adams proclaims in The Hitchhiker’s Guide to the Galaxy: “Anyone who is capable of getting themselves made President should on no account be allowed to do the job.”) Following this train of thought, the people whose memoirs would be most edifying are the ones least likely to write one.

In light of this unsolvable paradox, we may have to settle with Burgo's more jaded view of real-life heroes and their memoirs. But can we still learn from these fatally flawed idols of ours?

I recently read and reviewed Hanya Yanagihara’s gripping novel, The People in the Trees, a work of fiction presented in the form of a memoir and framed by allegations of sexual assault on the part of the protagonist. The idea of “a memoir as fiction” serves to subvert the very point of the memoir and tip a cynical hat to the rash of fraudulent memoirs out there today, and the accusations of pedophilia serve to undermine our ability to trust the book’s narrator from the outset. It’s not too difficult to imagine such a thing happening in today’s literary landscape — probably because, as described above, it already has. And yet, Yanagihara challenges our immediate, visceral reaction to the protagonist’s persona (as well as, it would seem, our reactions to the aforementioned memoirists’ deception); as she asks in an interview: “If a great man does awful things, is he still a great man?”

In the cases of Armstrong and Mortenson, the answer can only be no. True, humans are flawed, and we would be naïve to assume otherwise. But when a hero’s fatal flaw undermines his entire being, we should revoke the "hero" card. For example, if Hercules’ fatal flaw were his strength, we couldn’t very well admire him as Hercules anymore. Although Burgo points out that it is unfair to place real-life characters on such a high pedestal, I can’t help but disagree with his assessment. It is precisely because these heroes are real that we want — or need — to believe that humans are capable of such fortitude and goodness. And that’s why, when the falsehoods are revealed, it makes the treachery all the more painful.