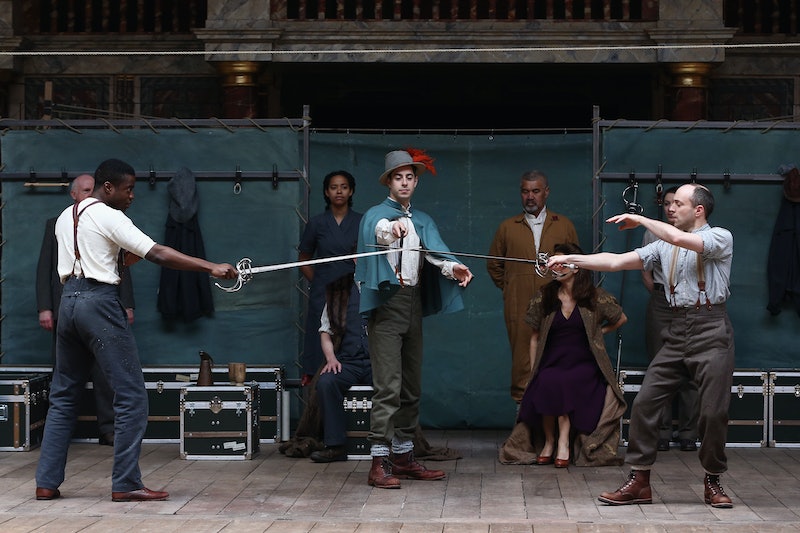 I'm a born-again theater nerd. I spent the better part of my life missing cool kid parties to go to rehearsal, holding grudges against directors who refused to cast me, memorizing vast chunks of poetry solely for recreational purposes, and completely losing any ability to not sing along to any single song from RENT when it was playing anywhere I happened to hear it.

Then I switched directions – I went from being an actor, all hand-gestures and loud-laughing, to being a playwright. I sneered at actors, rolled my eyes, drank coffee and chain-smoked cigarettes while talking about "pathetic fallacies". Little did I know, but I was still a theatre nerd – just a different kind. Eventually, I accepted this reality and owned it to best of my ability. This meant forcing my friends to go see terrible free productions of plays by Brecht, and ordering flash mobs to represent the pollution of our rivers and oceans (one of these things is true and probably not the one you think.)

Now that I'm a bit older (31, still a baby but older nonetheless), I'm in a different career altogether, but that doesn't mean I've totally forgotten my theatrical roots. In fact, now that I'm not mired in the world of plays 24/7, I no longer roll my eyes so much at the excesses of my colleagues in arms. Because being a theater nerd? That's awesome. And as I got older and saw more of what kinds of humans inhabit our planet, I've come to realize that theater nerds are by far the greatest people around. Here are 10 reasons why:

1. They've Got The Right Shakespearean Quote For Every Occasion

Want to pen the perfect "eff off" note to your lame-wad ex but can't think of where to begin? Your theater nerd friend can help you sass with class. Shakespeare ain't dead – he's throwing shade all over the damn place.

2. They Can Survive on Very Little Sleep

Thanks to the seemingly endless hell that is tech week, a theater kid knows that sleep is for amateurs. Deprive them of their pillow time all you want, it will only make them stronger. It will also slowly drive them to madness, but that is neither here nor there.

3. They Thrive When Stressed

You're stressing out the theater kid AND THEY ARE LOVING IT! A theater nerd takes your average crisis ("Shit, I forgot to pay the rent.") and turns it into high drama ("We're out of milk? LOCK THE WINDOWS OR I SWEAR TO GOD I'LL JUMP.") There is no problem too big for them to subvert its energy into a totally kinetic and entertaining solo performance piece.

4. They Can Memorize Anything

They might seem flaky, like they're in their own little world, but when it comes to memorization, theater nerds have that game on lock. Can't remember the number to the pizza place? What was the address of the party that babe-whose-name-you-don't-remember was hosting? Ask the theater kid. They've got this.

5. Need Something Black? Theater Nerds Can Help With That

If ever you need to borrow a little black dress, turn to a theater kid. They'll be able to help you out and then some. Just try to get out of their before they insist on kitting you out in character shoes, too. Fun fact: We all look dumb in character shoes.

6. They've Got All The Dirt

If you're dying for a gossip fix, ask the theater nerd in your life. They are a veritable vault of all the juice about anyone worth listening to. They might preface their gossip sesh with an obligatory, "Well, you didn't hear it from me but..." It doesn't matter – everyone knows who told you, because that person told them too.

7. They Are Musical Encyclopedias

- "What was that one? Where like, the guy was stomping in puddles?"

8. If You Need Advice, They're There

Granted, most of this advice will be suggestions to vigorously thrust or perhaps add a stylish twirl when you enter a room, but let's be real: There's worse advice out there. A little well-timed pelvic thrusting hurt officially no one. Unless you didn't stretch first, but you're theater friend will remind you to do that too.

You'll never be bored with a theater nerd around. As a trained theatrical professional, every theater nerd worth their salt has at least several hundred hidden talents that we are more than totally willing to share with you at any given moment. We know, we're the greatest.

Borrowed your mom's car without asking and now it's completely wrecked it? Fret not! Theater nerd is here to help you improv your way out of this one: "We're just going to improv, okay? Whatever I say just got along with it. Okay. Mrs. Finnegan, we were abducted by a roving band of brigands." Notice we didn't say they would successfully get you out of a jam, but they'll try with flair.