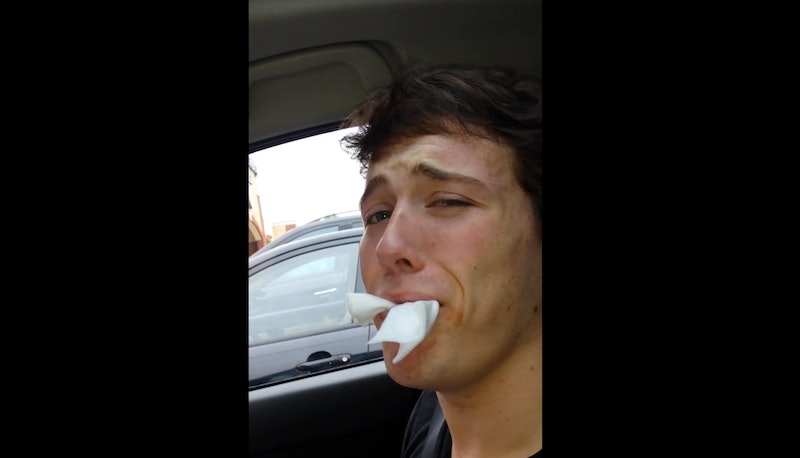 It's been almost a decade since my wisdom teeth were yanked out, and I sort of recall waking up in the dentist office's recovery room with a mouth full of cotton and a mind full of questions. I promptly began crying and cussing as loudly as my bloody maw would allow. My mom tried to calm me down, but she was no match for my emotions or my expletive-laden tirade about the surgeon’s socks (to this day, I don’t know why I was so offended by his socks), not being able to feel my face, and wanting Chicken and Stars soup. So, when I saw the video of 17-year-old Cody Lanphere freaking out post-wisdom teeth removal over Beyoncé not showing up for his surgery, I immediately empathized. Been there, buddy.

And then, I bowed. I bowed down, stitches. Because being devastated over Queen Bey not attending your wisdom teeth removal is an infinitely better post-op reaction than me sob-yelling I won’t eat anything other than Chicken and Stars soup. Lanphere's priorities are aces.

In an interview with ABC News, Lanphere said he can't remember anything that happened while he was in that whacked-out post-surgery state, but his Bey feelings (Beylings?) did not surprise him: Lanphere loves Beyoncé and has been a fan since the Destiny's Child days. Right there with you, Lanphere. Right there with you.

The Bey emotions (Beymotions? Sorry, I can't be stopped) happen at the top of the video. Warning: Throughout Lanphere's rant, the bloody gauze peeks out of his mouth. If you're squeamish about that sort of thing, just close your eyes and listen to the magic:

After I watched this beautiful Bey moment, I mumbled, "You're toothless, Cody, tell 'em." And I couldn't stop laughing at my corny joke. For, like, two minutes.

And then, I knew what I had to do: write some Lanphere/wisdom teeth removal-inspired lyrics set to the tune of a Beyoncé's “***Flawless." And that is exactly what I did.

My mom recorded me on the way home from the dentistI think Beyoncé told me she’d be at the dentistMy mom told me we could call her when we got homeI think Beyoncé lied to me and now I can't stop cryingI'm TOOTHLESS!