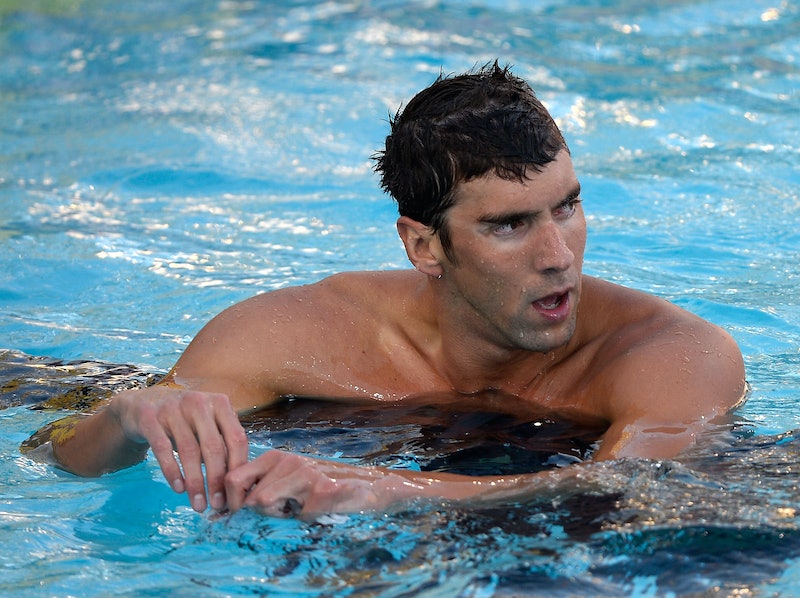 Uh-oh, looks like Olympic swimmer Michael Phelps won't be in the water for a while. NBC reports Phelps was suspended from competitive swimming for six months Monday after being arrested under DUI charges last week. He's also been banned from swimming for the United States against Russia in the world championships next year.

The 29-year-old, who holds the record for most decorated Olympian of all time — he currently holds 18 gold medals, 22 medals overall — was in the middle of an attempted comeback from a hiatus after the 2012 Olympics. He was reportedly stopped in Maryland last Tuesday for speeding, where he blew almost double the legal BAC limit. If that wasn't bad enough, it's not even his first DUI. He was arrested for his first DUI in 2004, which earned him an 18-month suspension.

Representatives for Phelps reportedly said he would be attending a six-week in-patient treatment program. He also personally tweeted multiple messages on Tuesday and Sunday, admitting he had been arrested for the DUI after, "excessive speeding and crossing double lane lines." He also apologized to his fans, saying he was disappointed in himself. He promised he would be seeking professional help immediately for his substance abuse in order to put focus on his own personal health before focusing on his professional swimming career.

As if two DUIs weren't enough, the swimming champion's substance use also came under scrutiny in 2009, when News Of The World newspaper published an explosively controversial photo of him smoking marijuana at a college party. The Associated Press reported despite being only 23 at the time, Phelps immediately admitted to the authenticity of the photo and apologized for his actions through a statement from his publicists.

Besides excessive drinking being incredibly dangerous to his physical health, there's also the question of how this run-in with the law will affect his career. His suspension may only be temporary, but everyone knows what happens after you get three strikes. While one can only speculate from here, something tells me it will be difficult for Phelps to continue to garner support unless he gets his act together, and fast.

Owning up to his shortcomings and realizing he needs to take care of himself before his career are definitely noteworthy steps in the right direction. However, what will truly be able to determine Phelps' ability to move on from this situation is what he chooses to do to clean up his reputation as an athlete and a role model after he finishes his rehab program.