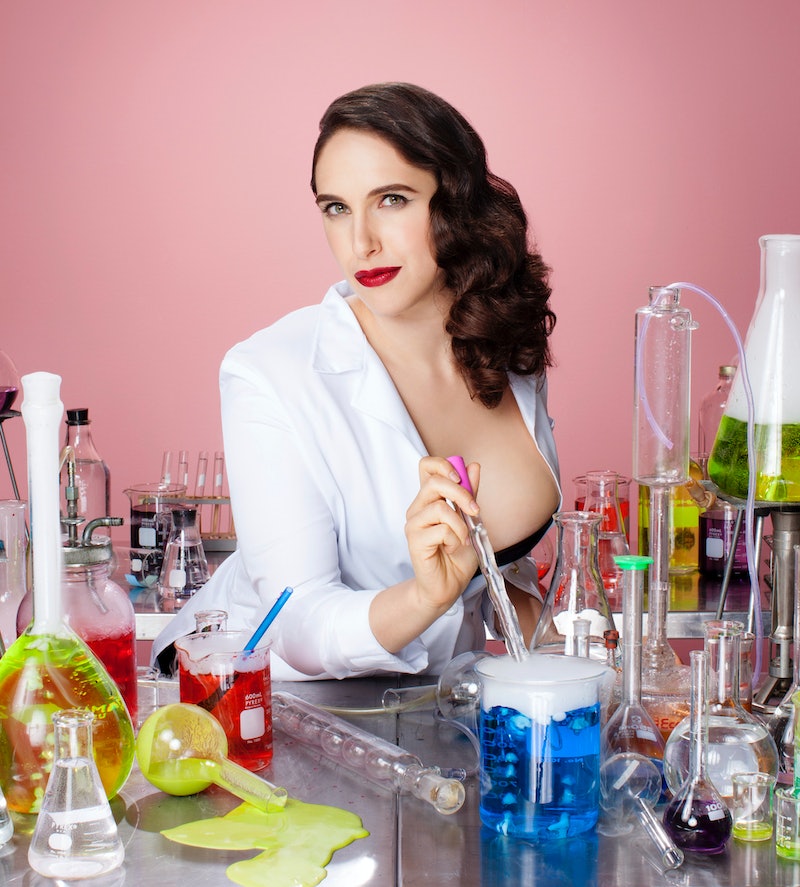 If you’ve been longing for a hard-hitting science book geared towards the inferior pea brains of women, your prayers have been answered. In Megan Amram’s Science… For Her! (Scriber) you’ll learn what religion is right for your body type, how to build a biological clock out of a potato, and you’ll get an inside look at Paula Dean’s Cookbook [sic] (her Fruit Salad = Skittles and ranch dressing, FYI).

Science… For Her! is a satiric textbook that skewers sexist notions of the female brain's ability to comprehend science, and it parodies women’s magazines like Cosmopolitan and Marie Claire. It also has interludes about the narrator "Megan," stalking her ex-boyfriend "Xander," and becoming involved with a meth head in a coma. Just read it and it'll all make sense.

Amram graduated from Harvard in 2010 and quickly gained a huge Twitter following due to her absurd, funny observations like, “I don't wanna sound racist, but all California Raisins look the same to me,” and “Ms. Pac-Man should only cost 70% of a quarter per play.” She’s a writer on NBC’s Parks and Recreation ,and she made Forbes’ 30 Under 30 in Hollywood & Entertainment list, and Rolling Stone ordained her one of the 25 Funniest People on Twitter.

I talked to Amram about working on the final season of Parks and Rec, the joy of seeing people misunderstand her book, and why she reached out to Ann Coulter on Tumblr.

BUSTLE: How has the final season of Parks and Recreation been going?

MEGAN AMRAM: It feels very different. I just was on set for my last episode last night and I almost burst into tears in front of everybody. I’m very quick to tears so I had to just not think about it and then get in my car and drive away. I held it in so I would seem like a strong, independent woman.

So no crying at work then?

I’ve definitely cried at work. There are five women writers [on the show] who are very sweet, emotional people — in a good way. That’s a compliment.

How did the idea for the book come about? Was it inspired by a tweet? Or maybe an experience with a sexist science teacher?

I knew I wanted to write a book and I had been writing a blog of short comedy pieces for a few years. I started to go back through what I had written to see if there was any thread that would connect them and I realized I had already written a quiz about how to cure cancer and then a fake Sex and the City that takes place after the apocalypse. I make fun of stereotypical women’s magazines or movies or things that are prescribed to women.

I want people to either really get it, or just be horrified by it.

Very quickly I thought it would be so much fun to write a really sexist book that looks like a Cosmo. It came out of that. There are a bunch of books like this that exist without irony, that are trying to teach women science by showing them how much volume is in a purse or whatever. I’ve seen them at bookstores for years and have been personally offended by them. Not like the writer is a bad person, but the fact that they would think women would need special treatment to be interested in this stuff is very funny to me.

What was the process of being on submission like for you?

I had such a great time, partially because I didn’t know what it entailed so I was wonderfully oblivious to what was going on. I put together a proposal that was very detailed about what the premise of this book would be. It was always called Science… For Her! and always had that cover. [The proposal] explained that it would be a comedy book that would talk about sexism and things that are going on in the world right now. I met with a lot of publishing houses and it was so clear who got the joke and who didn’t. It was awesome because that’s how I want the book to be. I want people to either really get it, or just be horrified by it.

Did you get some horrified reactions?

My editor at Scribner was so sold on the topic and immediately understood the joke. Older women didn’t understand what was going on. There are plenty of older women who get it but it seems that there’s a generational divide. I can’t imagine a lot of 70-year old women are going to find this book and laugh at what I call my vagina, but that would be such a cool thing if there is a 70-year old woman who does that.

I can’t imagine a lot of 70-year old women are going to find this book and laugh at what I call my vagina, but that would be such a cool thing if there is a 70-year old woman who does that.

Why do you think that is, that older women weren’t getting the joke?

If you grew up as a Millennial or younger than that, you’re trained to think that things are fake. It’s a very interesting byproduct of the Internet age. I can’t see a video now and not think it’s constructed in some way, and that goes for everything.

It’s the kind of book that some people actually could buy on accident and take seriously, which is kind of scary.

I’m not a rascal — I really want to please everybody, and I don’t like marginalizing anybody with what I’m writing but it is so fun to see people not understand this book. I want people to accidentally see the cover and think it’s part of that world of Cosmo. Hopefully people will buy this book as an accident.

You’re writing as "Megan" but you’ve created this fictional character who is basically the most shallow, horrible human — in a hilarious way. Talk about writing as that other Megan – the one who stalks her ex-boyfriend Xander (see pic below) and gets addicted to meth so she can lose weight.

It’s so fun to write as that person. I read those [women’s] magazines since the time I was 11 or something and it becomes so ingrained in you, how they talk and what they talk about. It was very easy to embody this character. There’s not that much of a difference between what I was saying and what they actually say in those magazines.

My friend got me a cookbook for my birthday published by Glamour that had all these recipes like “engagement chicken,” and it blew my mind because I was like — how much of this is tongue in cheek? If it’s not it seems like Dada or something. The women who are actually writing these things — it must make them go crazy.

The pictures in the book are hysterical, and as I was reading I kept wondering who in the world these people were, because they’re definitely not from Getty Images. Who posed as "Xander," for example?

Xander is my roommate and one of my best friends. He came to the photo shoot that day and I was like, "You’re obviously Xander." We hired an actor to play the meth addict in a coma, which was so amazing because you can write any sort of character and then someone exists in L.A. who is like, "Oh yeah, I’m definitely right for that part." The magic of actors who are just waiting for your call is pretty powerful. I go through massive weight gain and weight loss, and there’s a physical toll on the narrator’s body. I think I should give up comedy writing — I think I’m model-ready.

I think I should give up comedy writing — I think I’m model-ready.

You posted a video on your Tumblr where you’re reaching out to Ann Coulter about the book – Coulter would probably be "Megan"'s’ real-life idol. Have you heard from her?

The book is coming out, Parks and Rec is ending, so what else are you working on?

I’m still writing this season of the show so I’m trying to enjoy it, and we’ll see what happens with the book. I really love TV and I want to keep doing that. Or maybe I’ll just get a science Ph.D.