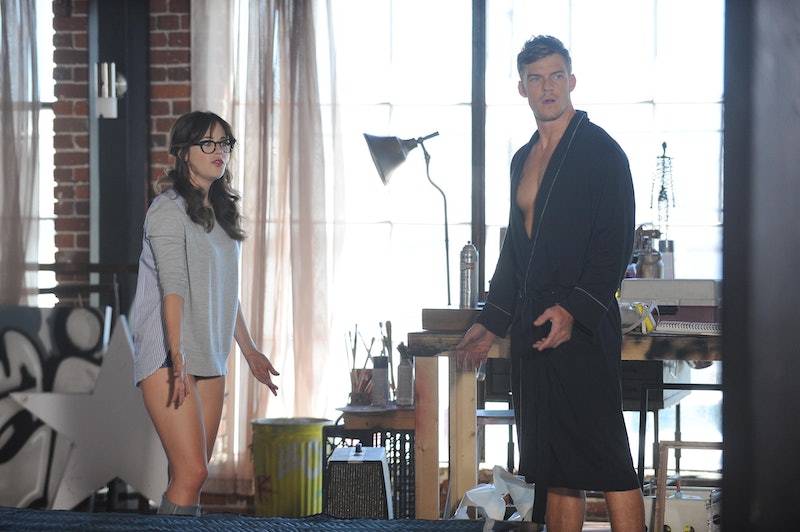 Since Season 4 of New Girl has decided to ignore every bad decision from Season 3 and just make every single character single, there are now a bunch of opportunities for Jess, Nick, Schmidt, etc. to go on dates with weirdos and bring on every hunky and/or funny TV star to play them. We already saw Jess navigate her way through obvious Tindr knockoff Dice, getting stuck with a bunch of freaks on a series of blind dates that never turned to anything more. Jess' next hookup on New Girl is Alan Ritchson, a TV actor and singer who's probably best known for playing Thad on Blue Mountain State, the horny football comedy series that ran on Spike for a few years.

Like most actors, he has a longer and weirder resume than that, that includes some offbeat choices that prove he'll be able to fit into New Girl's cartoony universe, even if he only lasts a single episode. On New Girl, he'll show up in an episode called "Micro," which is either referring to a tiny piece of spy technology or an unsatisfying package. (I'm assuming it's the sex one.) Even before the Jess & Nick nightmare of Season 3, she was dating David Walton's doctor character for a bunch of Season 2 — so she's bound to be pretty damn awkward now that she's single again. And breaking up with an incredibly hot guy for something as shallow as his tiny piece of spy technology will probably make her incredibly uncomfortable.

But for the moment, let's focus on Ritchson: is it possible that he can out-weird even Jessica Day? Judging from some of his past projects, I think so.

He Started on American Idol

Ritchson competed in the third season of American Idol, back when they still came up with weird, must-be-scripted bits like this. His voice was pretty good, but he earned that ticket to Hollywood with good-old-fashioned sucking up to Paula Abdul, singing an OK version of "You Are the Sunshine of My Life" to her. Side note — let us never return to a time like 2003, where flip flops were acceptable footwear and faded, feathered boot-cut jeans were acceptable leg wear to go with that footwear.

Ritchson didn't play any characters in 2007's Beowulf, but he did serve as the motion capture model used for the titular hero, whose voice and movements were performed by Ray Winstone. But Ritchson returned to mo-cap to star as Raphael, one of the Teenage Mutant Ninja Turtles, in Michael Bay's film from this summer.

He Played a Superhero on TV

Ritchson's first big TV role was as Aquaman (well, his alter ego Arthur Curry) on the CW's Smallville. And he was the first, too — the very first live-action performance of the Aquaman character. Now that the character will be heading to the big screen in Zack's Snyder's Batman Vs Superman: Dawn of Justice, I wonder: will Aquaman finally be cool? Probably not, because even though Ritchson's abs were working overtime, Arthur always seemed like a huge dork.

He Tangled with Katniss

He already played a superhero and an ancient hero, but he also played the evil Gloss in The Hunger Games: Catching Fire. Someone's got to play those District 1 villains.

He Even Has an Album

Ritchson returned to his pretty-good singing roots in 2005 to release an album, This Is Next Time . And he hasn't stopped singing, either. He just released a new music video for his song "Mojito."

Even though he hasn't done much comedy beyond Blue Mountain State, Ritchson always seems to play super-handsome guys… with a strange twist, like they're superheroes with goofy powers or anthropomorphic turtles. That inherent strangeness should be enough to help him fit in with the New Girl gang for a week. Even if he's bringing a few, er, shortcomings to the table.