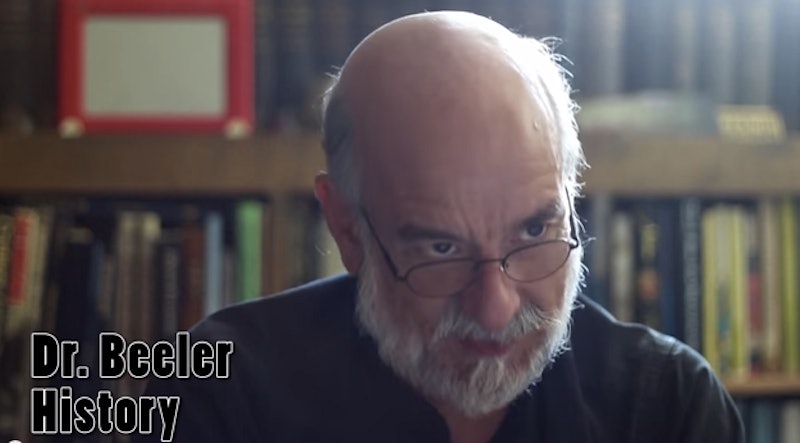 Jimmy Kimmel, move over. The University of Alabama just beat you at your own game. In the spirit of the talk show host's "Celebrities Read Mean Tweets," University of Alabama professors read their "Rate My Professors" reviews and provided some pretty spectacular footage for The Crimson White, the university newspaper. If this isn't the best video you'll see all day, I really want to see what videos you're watching.

No professors were spared in the making of this film (though I doubt any were harmed, either), as the Crimson had instructors from the history, journalism, accounting, engineering, and criminal justice departments take a dive into the murky waters of "Rate My Professors," the academic equivalent of the dreaded comment section of YouTube. And just like the comment section, these reviews were equal parts hilarious and painful.

For those of you who had to brave your college years without the help of these handy dandy not-to-be-trusted guides to finding your professor (and also those of you who have yet to enter the mysterious four years of college), Rate My Professors is an online forum that allows both terribly disgruntled and supremely enthusiastic students either bemoan or rave about their professors. Sometimes even both — in the same review!

Professors are judged based on their helpfulness, clarity and easiness (because those are the only three metrics that determine the quality of your teaching) on a scale of one to five, with one being the dreaded pits of professorship and five being comparable to god status. There is also an opportunity to award a professor a chili pepper if they are particularly spicy hot.

And while I imagine professors generally stay away from the likes of such rating systems, this video makes me wish that my own professors would start every lecture with such a reading because I sincerely believe it would enhance my academic experience. Take note, Dartmouth — write that into your syllabi.

First up to bat is Dr. Beeler, a history professor whose website claims that his research interests include Victorian Britain, public opinion and defense policy, imperial defense administration, and libertarian fallacies. Sounds like my kind of professor.

However, one student notes that despite Beeler's prominence as a lecturer, he has a "strange infatuation with Mr. T." That, my friends, is a deal breaker.

Beeler also notes that contrary to one student's claim that "he will help you out with anything," he will not, in fact, buy his underaged students beer. Good man, Dr. Beeler. Good man indeed.

My favorite thing about these sorts of reviews is always the absolute sincerity with which students blame their teachers for their bad grades. Because the only reason we ever fail exams is because our professors didn't teach us the material, right?

But Dr. Bragg isn't even upset that one student called her "the worst I've ever had." All she wants to know, you Alabama students, is why she doesn't have any chili peppers. Give the woman what she wants, will you?

Note to self: if writing a professor review, be sure to use proper grammar, as you can never be sure when said professor will read said review and judge you on your poor writing skills. Cummings, however, is one of the better liked professors at Alabama, it seems, with an overall score of 4.1 and reviews like, "I just want to hug her."

As Professor Cummings says, "Hugs are nice." Some reviews are not.

Kids, remember this face. You're looking at what one students describes as "the Bill Nye of accounting."

Remember that note to self I wrote a little while ago? Dr. Peacock (what a great name) really drives that point home with her scathing review of her own review. Just for context, here's what the review actually looked like, complete with no punctuation and "u" instead of "you."

Bold move, histruss, admitting that you cheated on a final.

"Look up the solution manual online and copy it," one review reads. To which a distinctly unimpressed Dr. Lane responds, "In engineering, you have to do engineering in order to learn it." Shocker. That, ladies and gentlemen, is a lesson that can be applied to so many things. Bravo, Professor.

This is the man who makes students switch majors. Why? Because he is really, really, really difficult. So much so, in fact, that one student had to use the word four times in a single review to convey just how difficult the class was, including the homework, the tests, and the course itself. God forbid that we go to college and actually get challenged.

Hubner's biggest complaint, though? No chili peppers out of 19 reviews. Priorities, people.

If I ever become a professor, I daresay that I would aspire to be like Professor Klutz, who is described as the "trillest teacher in school."

Unfortunately, the gravity of this compliment is lost upon our friend here, as he does not know what "trill" or "trillest" means. Well, Professor, I am happy to let you know that as per Urban Dictionary's definition, it means that you are both true and real, which in this day and age of falsehood and deception, is no easy feat.

With a perfect 5.0 average and a flaming hot chili pepper, it seems that Professor Klutz is about as clutch as they come.