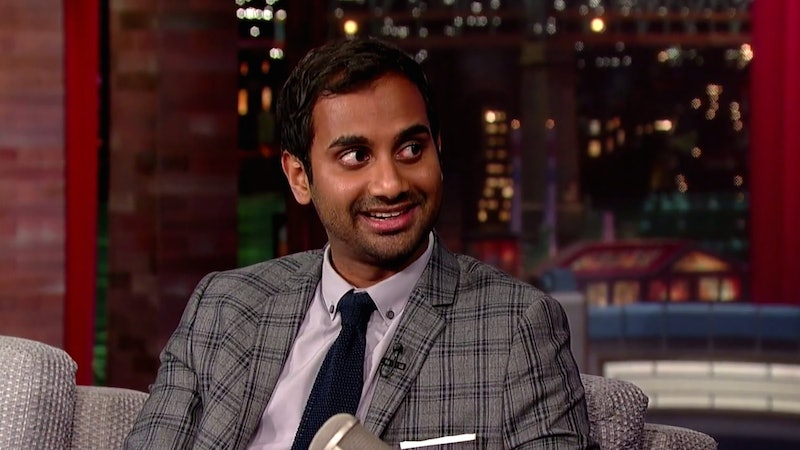 If you're anything like me and didn't think you could love this dude any more than you already do, well, have I got a treat for you: Aziz Ansari talked about why he's a feminist on last night's episode of The Late Show With David Letterman, and his explanation — which explains exactly how simple a concept feminism is — was pretty much perfect. (AKA, he used a Beyoncé metaphor.)

Ansari gets started on the topic whilst talking about his girlfriend, an awesome-sounding chef gal who lives with him in LA and is really into feminism as well as making delicious meals. He explains that he's a feminist as well, and asks people in the audience to clap if they agree — when an audible amount don't clap, he comes back with this gem: "I don't believe you. Because, if you look up feminist in the dictionary, it's just someone who believes men and women have equal rights. And I feel like everyone here believes men and women have equal rights."

Feminism is not an outlandish concept — it's literally that simple.

To further drive his point home, Ansari then goes into an amazing metaphor about Beyoncé and Jay Z, which I think is probably better viewed than explained — and will hopefully help people who don't yet realize that they're feminists see the light. Check the video below.

More like this
Amanda Gorman Shared A Powerful Message On Meghan Markle’s Penultimate Podcast
By Darshita Goyal
Wimbledon Alters All-White Kit Rule Amid Candid Period Discussions
By Catharina Cheung and Rachel Mantock
Claire Foy & Rooney Mara Revisit A Devastating Tale In 'Women Talking'
By Bustle UK
In 'The White Lotus,' Leo Woodall Gets His Moment
By Gabrielle Bondi
Get Even More From Bustle — Sign Up For The Newsletter