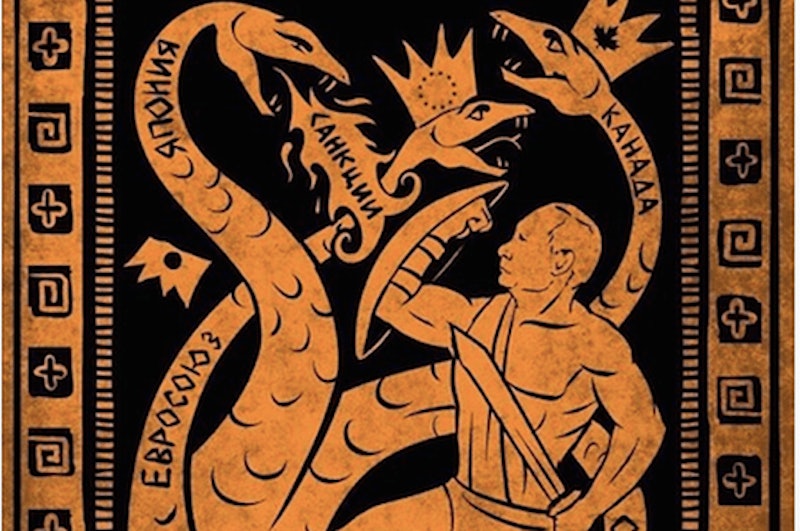 Tuesday is a big day. It's Russian President Vladimir Putin's birthday, and he's celebrating the big 6-2. While 62 may be a non-milestone of a birthday, one birthday present suggests otherwise. For his birthday, Putin received a 12 Labors of Hercules art exhibition, in which the Greek hero is replaced by... Putin. Each "labor," or episode, depicts Putin performing a heroic feat of superhuman strength. While the original Herculean narrative featured mythical beasts, Putin's version sees him defeating his modern enemies, such as terrorism and Western sanctions. Yes, really.

The exhibition, organized by a pro-Putin Facebook group, features artworks by an anonymous collection of artists and is on display in Moscow's Red October space. The group's leader, Mikhail Antonov, told the Guardian:

We’re forming a different image of Putin because the western media constantly criticises him, and our media occasionally attacks him as well. But here we see him completing these heroic deeds. We see that the interpretation of these events is not so categorical.

Hercules, a Greek demigod known for his masculine strength and his many adventures, is a fitting comparison for Putin, who wants you to believe he's the most manly president the world has ever seen. In fact, his legacy might be less defined by his autocratic rule and more by his many activities aiming to ooze machismo. These include, but are not limited to, Putin riding a horse shirtless, fishing shirtless, and hunting shirtless. So, it was probably relatively easy to artistically recreate the scenes of Putin acting like Hercules — there was already so much real-life inspiration.

The 12 Labors of Putin, Apparently