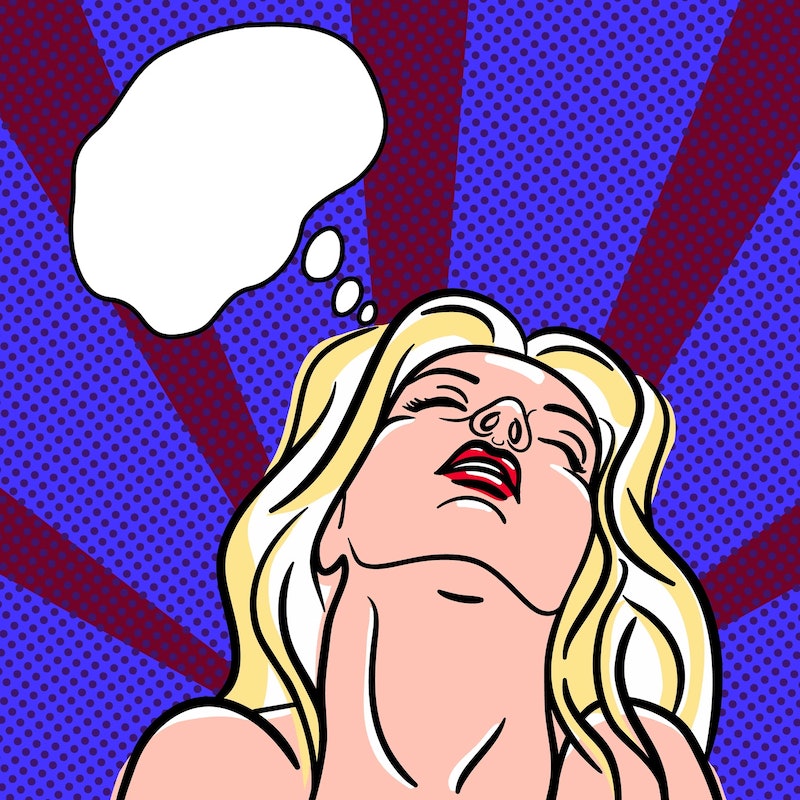 Humans as sexual beings have been chasing the G-spot ever since Dr. Ernst Grafenberg identified it in 1950. But according to new research from sexologists Vincenzo Puppo and Giulia Puppo, the G-spot doesn’t actually exist — and moreover, vaginal orgasms don’t exist, either. It’s actually pretty good news that these two myths have been busted, too; here’s why.

The idea of the G-spot actually existed long before Dr. Grafenberg got to it; according to Live Science, the Kamasastra and Jayamangala scripts dating as far back as 11th century India refer to the same sensitive area. But although a number of researchers in recent years have determined that the G-spot is a myth — including Emmanuele Jannini of Rome’s Tor Vergata University just this past September — Puppo and Puppo break new grounds both in how they define all the pieces of female anatomy that come into play during sex, and in their conclusion that vaginal orgasms just aren’t an actual thing. Admittedly, the report is a little odd in style; exclamation points are so frequently used that the overall effect ends up being a little more comedic than was probably intended. But it also reframes how we think about sex, particularly from the female end of things, which might be exactly what we need right now. The whole thing, titled "Anatomy of Sex: Revision of the New Anatomical Terms Used for the Clitoris and the Female Orgasm by Sexologists" and published in the journal Clinical Anatomy, is a tiny bit confusing, so here are the salient points.

Although some of Puppo and Puppo’s findings definitely aren’t new news — we already know, for example, that the vagina and clitoris are different structures with no anatomical relationship to each other — they do redefine some terms in ways that might be kind of helpful for good sex to happen: What’s hitherto been referred to as the “clitoral complex” is more accurately and simply described as the “female penis”; additionally, “female ejaculation” — that is, the “expulsion of fluid from the urethra that is different from urine” — should really be called “female emission.”

The Myths of the G-Spot and the Vaginal Orgasm:

A huge portion of the report is devoted to busting these two muths. Puppo and Puppo offer an analysis of G-spot augmentation (which is apparently a thing) as evidence for why it can’t possibly exist:

“G-Spotplasty or the G-shot, is a cosmetic surgery procedure for temporarily increasing the size and sensitivity of what some believe to be the G-spot, which is located about half way between the pubic bone and the cervix about 3 in. into the pelvis, in which a dermal filler or a collagen-like material is injected into the bladder-vaginal septum. If the supposed G-spot is located on the anterior vaginal wall between the vagina and the urethra, why is the dermal filler injected into the bladder-vaginal septum for G-spot amplification? All published scientific data indicate that the G-spot does not exist (and the female prostate has no anatomical structure that can cause an orgasm) and that G-spot amplification is an unnecessary and inefficacious medical procedure.”

And if the G-spot doesn’t exist, neither can vaginal orgasm. “The vagina has no anatomical structure that can cause orgasm,” write Puppo and Puppo; what we’ve been calling “vaginal orgasms” are pretty much always triggered by the surrounding erectile organs, which are connected not to the vagina, but to the “female penis” as previously defined. QED. Or something.

Puppo and Puppo also have some interesting things to say about premature ejaculation, or PE. They note that PE is considered by sexual medicine experts “only in the case of vaginal intercourse”; furthermore, it’s identified as “the cause of failure of vaginal orgasm in the partner,” which also has some pretty negative psychological consequences for men. But hey, guess what? If the vaginal orgasm doesn’t exist, then PE doesn’t really exist, either! Write Puppo and Puppo (emphasis mine):

“Many men think long intercourse is the key to having orgasms during intercourse, but long intercourse is not helpful to women and some females may be grateful to get it over with quickly. PE does not exist if both partners agree that the quality of their sexual encounters is not influenced by efforts to delay ejaculation. Male ejaculation does not automatically mean the end of sex for women; touching and kissing can be continued almost indefinitely. Non-coital sexual acts after male ejaculation can be used to produce orgasm in women. PE has become the center of a multimillion dollar business, but PE during vaginal intercourse is not a male sexual dysfunction. Sexual dysfunctions are conditions in which the ordinary physical responses of sexual function are impaired.”

In recent years in particular, it’s often said that there’s far more to sex than just P-in-V intercourse — and here’s the scientific proof that it’s absolutely correct. Sex doesn’t even necessarily have to end in orgasm for either partner. As long as everyone had a good time, that’s really what counts.

You can read the whole report online here, but I think Jenny Kutner over at Salon nailed the most important takeaway (while simultaneously making the world's best joke about all those exclamation points): “The last part might seem like a ‘no duh’ statement for plenty of women, but it should be a wholly welcome one. There are plenty of ways for women to have orgasms! And this report details quite a few of them! And then it encourages sexual health professionals (and people in general!) to start talking about sex and female orgasms! These are all good things!” Indeed! Now go forth and have good sex, everyone!