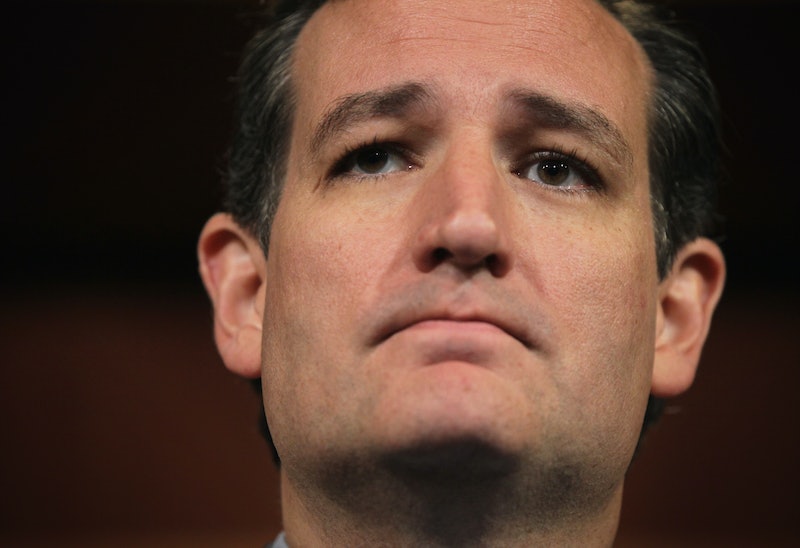 Yesterday was an amazing day for same-sex marriage across the United States — it was effectively legalized across 11 states in the blink of an eye. And the best part is, it barely took any fuss: simply by declining to hear any of seven different appeals, the Supreme Court rendered the lower courts' rulings, in favor of marriage equality, settled. Of course, the Supreme Court's marriage equality move has enraged some Republicans, but you know what? That's okay, because at this point, and on this issue, all that outrage isn't going anywhere.

Basically, what the Supreme Court did completely rewrote the map in an instant. Their declining the appeals brought the number of states with effectively legal same-sex marriage to 30, as compared to the 19 that had it beforehand. In other words, the U.S. went from a state majority disallowing same-sex marriage to a majority allowing it.

And really, the decisions makes sense. The Supreme Court already did this dance, and proponents of so-called "traditional" marriage — a.k.a. hetero-exclusive marriage — came up sorely lacking. But that hasn't stopped a number of prominent Republicans from spitting fire over the decision, proving that not all rats instinctively flee sinking ships.

Sometimes Senator Ted Cruz is a happy guy. See his smile? But the horror of states being unable to discriminate against same-sex couples turns that grin upside down.

Of course, the Supreme Court ruled in 2013 that the federal Defense of Marriage Act (DOMA) was unconstitutional, in violation of the Fifth Amendment. Whether Cruz sincerely thought there was any chance they'd come to different decision on a state-level ruling is open to debate.

But this much really isn't: The legal arguments against same-sex marriage are flimsy at best, and discriminatory at worst. That's why all seven rulings appealed to the Court had sided with proponents of marriage equality — because the anti-equality side can't really muster a compelling case beyond personal discomfort, and personal discomfort can't dictate civil rights.

While nationally elected Republicans have more or less stayed pretty silent on the issue, the aforementioned Texas Senator notwithstanding, it's the people who have to answer to a blood-red conservative base who're most affected by this. Brownback has never been all that cozy with the LGBT constituents of his state — after all, he's pretty chummy with virulently anti-gay Christian fundamentalist Lou Engel — and he's up for reelection in November, so it shouldn't come as much surprise that he's unhappy about the decision.

An overwhelming majority of Kansas voters amended the Constitution to include a definition of marriage as one man and one woman. Activist judges should not overrule the people of Kansas.

What's quite surpassing indeed, however, is that Brownback is planning to continue ignoring a now-legally binding lower court ruling. His refusal to play by the rules may draw a lawsuit from the American Civil Liberties Union (ACLU), as reported by Ken Williams of San Diego Gay and Lesbian News.

Haley hasn't been breathing fire about this publicly since it began, that much is clear. But like Brownback and the state government of Kansas, Haley is standing behind discrimination in South Carolina, in spite of the Supreme Court's move. South Carolina is refusing to allow same-sex marriages to go forward, pending the outcome of another case brought against the state's law, according to Attorney General Alan Wilson.

And Haley agrees, as voiced by her spokesman Doug Mayer.

Our voter-approved state law should be followed until a court rules on it directly.

This is basically the last-gasp, dead-end strategy to prevent same-sex couples from getting married — just keep contesting what's become a clearly pervasive legal precedent, in order to delay having to do it. This is especially cruel to LGBT residents of an advanced age, who may not have as much time left to tie the knot. Honestly, the courts aren't going to suddenly to a 180-degree flip on this, so why not just let it go?