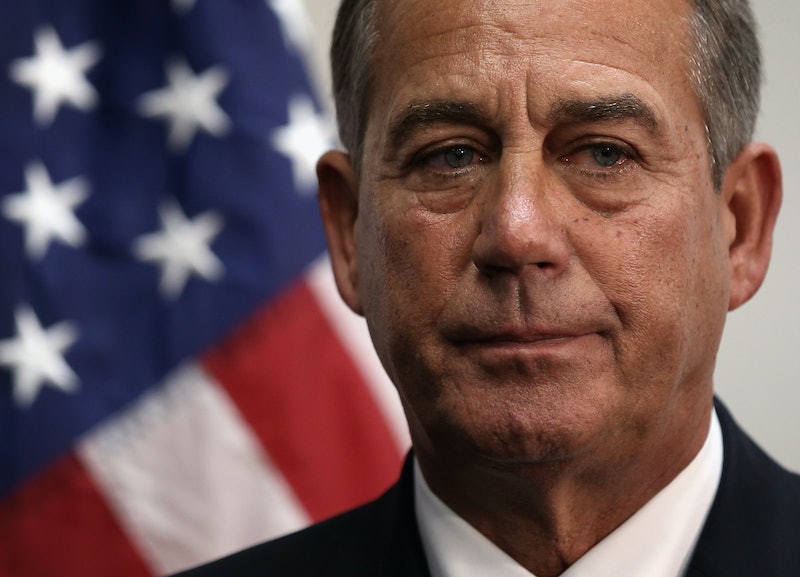 Here's a helpful tip for any politicians looking to shore up their web presence — social media is hard, and you really need savvy people taking charge of it to avoid embarrassing situations. Situations like, well, this: Speaker John Boenher's open-ended jobs tweet went horribly wrong Tuesday, thanks to a risky play by whoever's in charge of his account. Essentially, if you're a controversial public figure — and really, any major elected officeholder is going to be controversial — don't send out a fill-in-the-blanks tweet inviting public feedback. Just. Don't.

Boehner's social media team didn't keep this rule in mind, or at least seemed willing to ignore it in service of getting their message out, but the denizens of Twitter weren't so kind as to let it slip past, at least not without some hearty mocking.

Basically, a tweet was sent out with five bullet points, with blank spaces to their right, using the hashtag #5pts4jobs. It seemed like an effort to crowdsource ideas for the GOP's job-growth rhetoric, or whip up some attention, or possibly both — there's a midterm election coming up in November, after all, and both parties are eager to be seen as courting the opinions of everyday Americans. But in the process, it read like an admission that the GOP has no jobs plan at all.

As you can probably guess, people had a lot of fun with it. But can you blame them? After all, some of these jokes write themselves.

Maybe that's not fair — after all, it's not like the GOP is only about Benghazi. Could we get a slightly less biased perspective in here?

Democratic Reps. Dina Titus and Tony Cardenas chimed in with their own suggestions, though certainly not the ones Boehner was looking for. It's unlikely that raising the minimum wage and comprehensive immigration reform are on very many Republicans' pre-midterm to-do lists, sad to say.

Of course, not everybody's out there trying to make political hay. Some people are just really passionate about their favorite movies! For the record, this list is absolutely untrue — Return of the Jedi should be above A New Hope, with Empire at the top, but hey.

Better luck next time, Speaker Boehner. At least now you know that when you extend a blank slate for Twitter to fill in, things can get pretty damn snarky pretty quick.