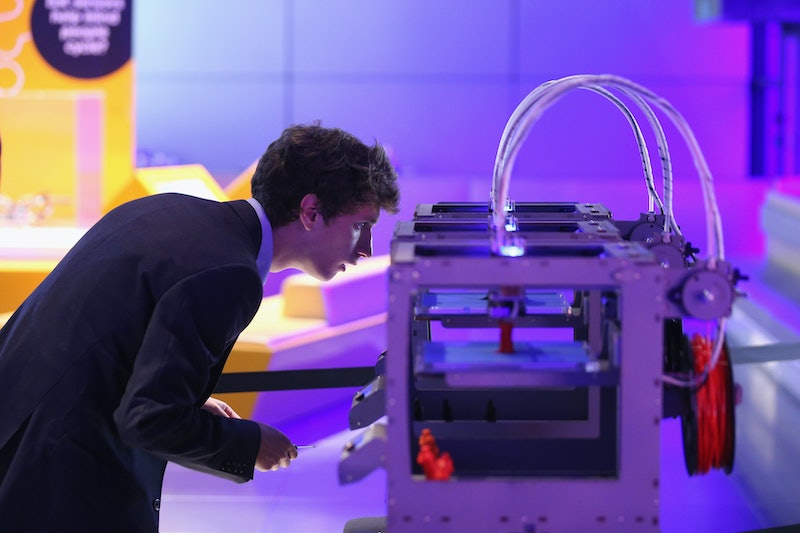 Though 3D printing has been around since the 1980's, it seems that the technology has only recent captured the public's attention. But now, 3D printing is making headlines in a big way as it continues to tackle larger and more complex problems. On Monday, doctors in New York's Morgan Stanley Children's Hospital used a 3D printed heart to save a 2-week-old baby's life in a completely groundbreaking process that has the capacity to revolutionize surgery. Thanks to this incredible 3D printed exact replica of the baby's heart, doctors were able to turn a potentially dangerous surgery into a relatively straight forward one, and the baby is expected to make a full recovery. Science wins yet again.

The 14-day-old infant was born with a congenital heart defect, which in this case, manifested itself as a heart riddled with holes. While this in and of itself is not particularly uncommon for children born with CHD, the baby also had an unusually shaped heart, which doctors feared would make the surgery to correct the defects very risky and extremely complicated. Dr. Emile Bacha, the baby's surgeon, told local Connecticut news that the child's heart was shaped "like a maze." Under these circumstances, Bacha said, doctors normally "had to stop the heart and look inside to decide what to do."

Stopping a two-week-old's heart, of course, is by no means a desirable course of action. But with the technology provided by an MRI machine and a 3D printer, there was no need to pursue such action. Instead, doctors simply scanned the baby's heart and 3D printed an identical, plastic version to study, allowing them to completely sidestep any additional exploratory surgery. The 3D printed heart, Bacha said, served as a "road map to guide us. We were able to repair the baby’s heart with one operation."

The 3D heart essentially served as a practice — a trial run, of sorts — the doctors could examine before embarking on their real surgery. The 3D printed heart provided them with an unprecedented level of accuracy and detail without ever having to open the baby's chest. This technology is also being explored by other doctors who want to use 3D printed versions of organs to avoid potentially dangerous surgeries that are used purely to "look around."

Just last week, Erle Austin, a surgeon from Kosair Children's Hospital in Kentucky, used a similar technique before performing heart surgery on his own patient. By using a Makerbot printer, he created a replica of his young patient's life in three parts, which allowed him to fully understand the organ before ever putting on his surgical gear. Speaking at Maker Faire in Rome, Austin told the audience, "I'm using 3D printing to help me understand a complicated heart."

But 3D printing can do far more than make hearts, though that achievement is incredible enough. Both in and out of the field of medicine, 3D printers are being employed in a variety of revolutionary ways, and here are just a few of the most promising examples.

Last year, scientists at Princeton University discovered that they could engineer real, working ears from 3D printed hydrogel, the material typically used when creating artificial tissue, calf cells and a silver coil that served as the cochlea. Over time, the living calf cells evolved into cartilage, and the silver coil was completely integrated into the ear's structure.

And it literally hears — in fact, it hears better than our real ears do, as they can pick up frequencies outside of the normal human range. This could completely revolutionize hearing aids, and while researchers aren't suggesting cutting off your ears and replacing them with 3D printed ones, these "bionic" ears represent a huge step forward in the field of what Wired Magazine calls "cyborg parts."

The home-building process has always been expensive and time-consuming. While mobile homes present some sort of a solution, they tend to be smaller, flimsier structures. But now, that may all be changing with the 3D printer. In January, Professor Behrokh Khoshnevis of the University of Southern California developed a monster of a 3D printer that he believes can print an entire house of 2500 square feet, complete with plumbing and electricity, over the course of just 24 hours. Well, it won't actually print out your electricity and running water, but it will provide all the necessary equipment that will allow for the easy installation of these amenities, greatly reducing the time and cost of the process.

This, Khoshnevis believes, will be crucial in terms of providing low-income, emergency and commercial housing. He also believes that such a technology would be indispensable to space travel, as it would allow humans to quickly build structures on other planets and the moon.

Think you don't want someone printing out your food? Think again. With the versatility of 3D printing technology, creative chefs and mad scientists are finding a delicious intersection between gourmet cooking and technology, starting with pizza and ending with chocolate.

Last year, NASA showed off a 3D pizza printer at the SXSW conference, where they effectively spit out a pie made of dough, ketchup and cream cheese. Ok, so it's not really your traditional pizza, but it's getting close! The machine takes powdered versions of the ingredients, then reconstituting them as it "prints" onto a hot plate that "bakes" the pizza as it is emerges from the machine.

If that doesn't sound too appealing to you, consider its possibilities in the dessert world. With 3D printers, customers may soon have the option of completely customizing their baked goods, from the ingredients to the flavors to the calories. And some fancy chocolatiers are replacing the plastic that 3D printers normally use with chocolate, creating beautiful, edible sculptures.

Say goodbye to animal testing and controversial amniotic stem cells. With 3D printing technology, scientists may soon be able to produce actual replicas of cells and tissues that will allow doctors to test drugs and treatments without risk to the patient.

The micro-tissues I think would be in the order of five years away hopefully, if we carry on at the pace we are now. You could even test personalized drugs. So you'd be able to use cells of the person that is ill and create specific micro-tissues that would replicate their response, rather than the response of a generic human.