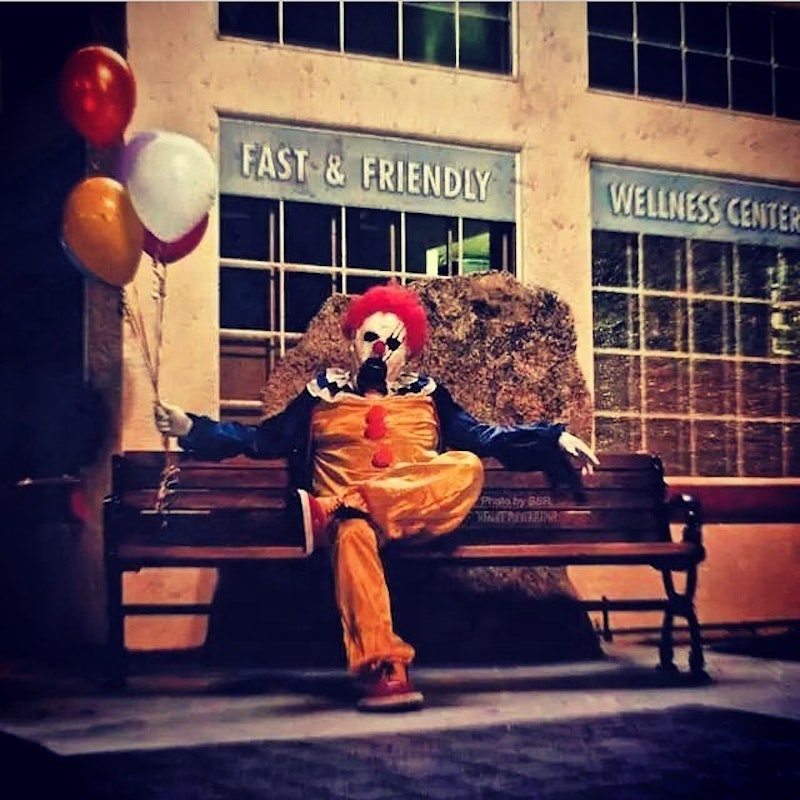 If you have a fear of clowns, even a little bit, turn away now. Seriously, do not continue reading. There appears to be an epidemic happening on the West Coast, and it's worse than your worst nightmare. Creepy, evil-looking clowns are roaming the streets of Wasco, California at night, and nobody knows why. They even have an Instagram account, and judging by the ominous captions, their intentions might be malicious. So, to repeat, there are terrifying clowns lurking the streets of California at night who may or may not want to hurt people. Fantastic.

According to LAist, the whole thing started with one clown in Wasco, CA. The lone figure first appeared on Oct. 1, walking around at night holding a cluster of multicolor balloons. And we're not talking about a regular clown here, which would already be plenty frightening. No, we're talking about something that looks like the son of that clown in Stephen King's It and Michael Meyers from Halloween .

His pale white face is distorted with black pools for eyes and a permanent scowl (he kind of looks like Dick Cheney now that I think about it). This thing is creepy, menacing, and apparently inspirational. Seriously. Check out this guy.

A creepy clown and the blood moon? I'm sorry, but that's just too much.

Residents of Wasco, before you pack up your stuff and GTFO of town, Wasco's KGET 17 news team caught up with the man in the clown suit, who revealed that his clowning around was for a year-long photo project with his wife and that they're not associated with any social media accounts featuring their photos. The man wished to remain anonymous (still creepy). But that didn't stop copycats from cropping up, who may have less innocuous intentions.

In the nearby city of Delano, a different creepy clown has been spotted. Some locals believe that they're the same person, but according to the Wasco Clown's Instagram caption, "there's more than one of us we're all over." We're all over?? Shudder.

That is not OK.

Residents have no idea what the clowns are doing or why they're suddenly a thing, and they remain divided on their enthusiasm for evil death clowns. Some are (understandably) scared:

Some think that murderous, sinister clowns are cool:

And some are more deranged than the clowns themselves because they apparently want to be clown groupies.

Many have chalked it up to a group of people who want to show some early Halloween spirit, but when the Instagram captions are questions like "Where should I go tonight Bakersfield (knife emoji) (gun emoji) Delano (gun emoji) Wasco (knife emoji)," maybe we should be taking all this a little more seriously?

On Tuesday, a third clown appeared on the streets.

How many more have to appear before we all realize that this is the beginning of the end? Just in case it hasn't sunk in for you yet: terrifying, homicidal clowns are roaming America's streets. Goodbye, humanity.