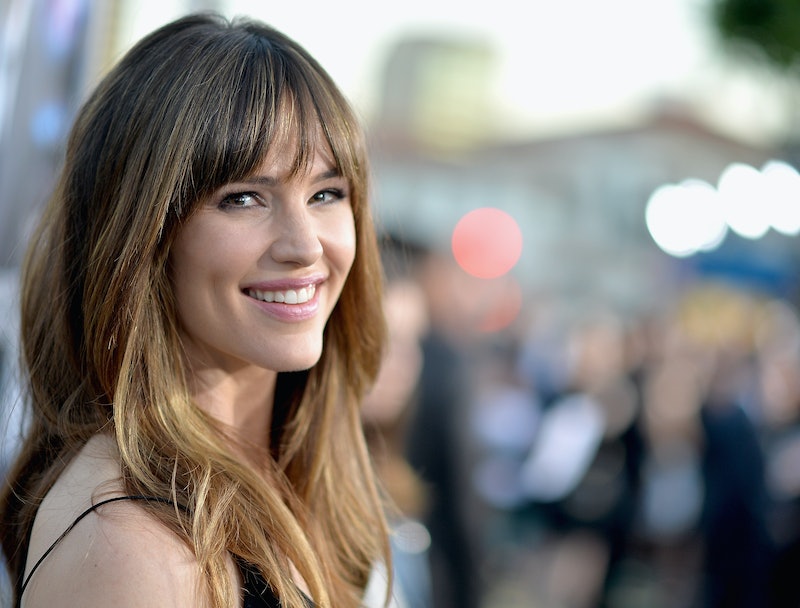 In an interview that will appear on The Ellen Show Wednesday, actress Jennifer Garner talked about her "baby bump." Now, before you get too excited (like the studio audience does in the clip), Garner isn't pregnant, but she does hear the same rumors you see online or in tabloids at the grocery store, and has heard that she has a baby bump. Well, she does. And according to her, she always will. "Forever and ever." Know why? Because she's had three babies and that can cause some changes in a woman's body.

The way Garner talks about her self-proclaimed baby bump is fantastic. It's like she's taking back the phrase baby bump in the most down-to-earth, relatable way possible — and I say that as someone who doesn't even have kids. Still, the way she is so honest about her body is something that would make pretty much anyone get that "hell yeah!" feeling, no matter what you're insecurities are.

I get congratulated all the time by people that I know, saying, "I hear you’re pregnant!" You know, this one woman who had babysat for us said, "Oh, my gosh! I can’t wait for number four!" and I thought, What is going on? So I asked around and apparently I have a baby bump. And I’m here to tell you that I do.

At this point the audience goes absolutely wild. People loooove pregnancy news from celebs, after all. But Garner has to step in and calm them down. She says,

Hold up! Hold right up! I am not pregnant. But I have had three kids and there is a bump. From now on, ladies, I will have a bump. And it will be my baby bump. And let's just all settle in and get used to it. It's not going anywhere. I have a bump. Its name is Violet, Sam, Sera. But I see you guys are really eager for us to pop out another one. Gosh, you’re exhausting.

Like I said, I don't have kids — and Garner's words are likely even more relatable if you do — but I still love what she's saying here. When it comes to reports of Hollywood pregnancies, a "bump" is enough to start pregnancy rumors as though a totally flat stomach is the standard, 100 percent accurate sign that you aren't pregnant, and if there's any fluctuation from that, no matter how small of a "bump" you have, it means you're pregnant. This is completely insane. By that assessment, I would've been sporting a baby bump for most of my life because my stomach isn't a flat, ab-tastic board.

Hopefully, Garner's words will make people think twice before spreading pregnancy rumors about her and other celebrities as well. An awesome statement like hers shouldn't go unnoticed.

More like this
Olivia Munn Got Real About How Her Body Hasn’t “Snapped Back” Post-Pregnancy
By Stephanie Topacio Long
Lizzo Changed The Lyrics Of “Grrrls” Amid Backlash
By Maxine Harrison
Jennifer Aniston Spoke Out About *That* Viral TikTok
By El Hunt
J.Lo Uses They/Them Pronouns To Introduce Her Child Emme For A Special Duet
By Jake Viswanath
Get Even More From Bustle — Sign Up For The Newsletter