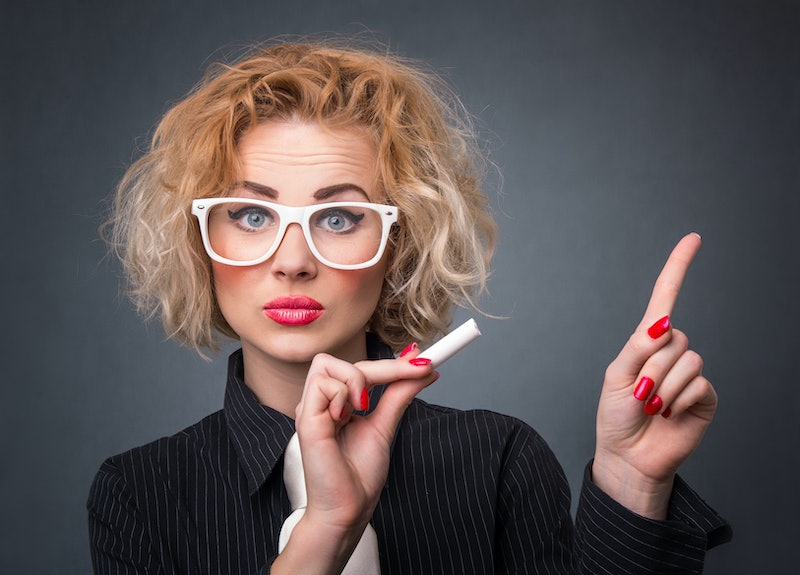 Got a question about feminism? Well, there’s not an app for that (yet)…but there is a solution: It’s called The Womansplainer tumblr, and it allows you easily and conveniently to find the answer to any question you’ve got about feminism. Even better, it does so by posing those questions to an actual feminist. What a novel idea!

The Womansplainer is the creation of artist and illustrator Elizabeth Simins, who is probably best known for her Tumblr Bad at Games and her Manic Pixel Dream Girl comic. In addition to her arty things, though, she's also an outspoken intersectional feminist and the founder of a movement fondly referred to as Gaming’s Feminist Illuminati (VICE's Motherboard section has an excellent interview with Simins about the movement, so check it out if you're curious). Like many of her projects, The Womansplainer combines Simins’ art- and tech-driven sensibilities with feminism; not only that, but it’s probably as important as it is funny.

The term “mansplain” may be defined in many ways; its simplest definition, however, is probably the one that Google provides when you search for the word:

It’s specifically a gender-related form of condescension and often it’s an example of sexism at its most odious. As such, The Womansplainer takes a tongue-in-cheek angle on the ’splaining thing, with its tagline: “Consulting for men who have better things to do than educate themselves about feminism.” That little dig aside, though, the goal of the project is admirable: To educate people about feminism in an entertaining and accessible manner. If you don’t understand something but are too lazy to do the research yourself, guess what? Now you’ve got no excuse for staying willfully ignorant. Knowledge is power, remember?

I imagine The Womansplainer will be useful for most people, too — not just men. The questions available in the drop-down menu range from “Why is it ‘feminism’ and not ‘humanism’/‘equalism’?” to “Do feminists hate sex/humor/fun?” and from “Explain rape culture/the patriarchy/what ‘systemic’ means” to “When is a rape joke okay? Stop censoring my edgy humor!”

Perhaps most importantly is the inclusion of the question “What is intersectional feminism/what does ‘cis’ mean?” — it’s a complicated issue, but understanding it is the key to cracking the whole thing. As I’ve commented before, that’s where the wider conversation about feminism and how it’s good for everyone, regardless of race, gender, or creed, needs to go in order to enact the change we need. That’s how we’ll eventually make the world a better place.

They’re pretty self-explanatory; for Let Me Google That For You, for example, Simins will spend up to ten minutes googling your question for you, after which she’ll send you a few articles she finds helpful. The two Twitter options involve Simins having a public Twitter conversation with you about your question. I think the specification that the conversation happens publicly is wise; hopefully it’ll hold people more accountable for what they say, which might cut down on harassment or unhelpful conversations.

At $20, $50, and $100 a pop, the prices might seem a little expensive — but that, too, I think is wise. If you’ve only invested a few bucks in something, odds are you’ll take it less seriously. If you shell out a little more, though, you’re probably more likely to treat it with the respect it deserves. Funny how that works, isn’t it?

Check out The Womansplainer here; you can also see more of Simins’ work at her website.