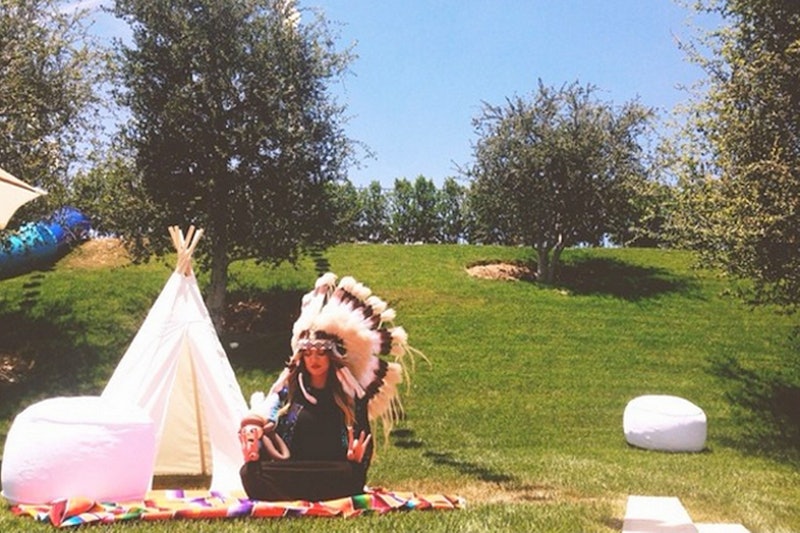 Halloween is rapidly approaching, so naturally, you need a costume — ideally, something amazing and creative and reflective of your personality and interests. Now, maybe you really love sugar skulls, or those fake headdresses most often seen on very white people roaming in random fields listening to painfully hip bands. Or maybe you think that “sexy geisha” is perfect for trick-or-treating. Here's the thing: That urge you feel to celebrate October 31 by slapping on a bindi (sigh — the forehead dot), painting your face brown, or talking in a fake accent? It's not cute. It's racist. While there are a million ways to be racist on any day of the year, it seems that Halloween — when we dress up as something other than ourselves, thus expressing our version of all kinds of identities we don't own — is a day that is as particularly fraught with ways to be racist as it is with white people who clearly don't understand what racism is.

So let me see if I can help: All of the aforementioned ideas? Racist. Sorry. As is putting on a fake butt, dressing up as a bigoted stereotype of Mexicans, or any one of the dozens of other offensive costumes that have led to people being suspended, fired, or otherwise taught the very hard lesson that racism isn't a good Halloween costume. And then there's the fact that some things are sacred in the cultures that created them. That sugar skull makeup isn't about "Mexican Halloween." It's for the Day of the Dead, a holiday that has nothing to do with Halloween. War bonnets are only worn by some nations, and they are given to heroes, not to random half-naked (or fully naked) women to pose in seductively while ignoring the reality that indigenous women in North America face the highest rates of sexual assault out of all ethnic groups.

The point: The things you borrow to dress up in because you think it's cute or cool? They mean something entirely different to the cultures you're taking them from. When you take those things for your costume, you ignore their significance to their original owners, and make light of them. It's offensive, it's theft, and it's not harmless fun — it's painfully racist.

Now I'm assuming that most (if not all) of the people reading this understand that you can dress up without resorting to darkening your skin or slapping on offensive prosthetics. But just in case you don't know that, let's talk about Halloween looks that won't get you cursed out by strangers on Twitter or at your favorite bar:

And that one friend that who tells you when your great idea is terrible? Listen to them. They're most likely right. If one person in your life can see an idea as offensive, chances are there are a lot of people out there who would agree with them. You've got a lot of options — nothing wrong with erring on the side of being respectful and conscientious.

See that handy-dandy list of possible costumes? Great, isn't it? Please note that there is one costume tip intentionally omitted: Putting on makeup to mimic the skin color of a favorite celebrity or character. Face paint is a weird thing on Halloween; sometimes it's completely fine, and other times it's insanely offensive. Want to paint yourself bright green to play Poison Ivy? Go for it. Want to paint yourself brown to imitate Eartha Kitt's Catwoman? No. Absolutely do not do it. And no, it's doesn't matter that you aren't deliberately setting out to mock a racial group. Darkening your skin is not actually flattering, nor is it an honor. It's offensive. There's just no way to redeem Blackface, Redface, Brownface, etc, or to remove them from their historical context.

And while you may have convinced yourself that as long as your intentions are good, then it's okay, the reality is that impact outweighs intentions. Your friends may know you mean no harm — maybe you even have a Black, Asian, or NDN friend that tells you that they're not offended. And maybe for that one person (who knows you, cares about you, and wants to think the best of you), that's even true. But they aren't the only people who will see your "not really / ironically racist" costume. Whether your pics wind up going viral on Twitter or some stranger at the event sees your fake feather headdress and has that “Oh ... this stranger is maybe a little or a lot racist” stomach drop that makes them avoid you all night, your costume will have hurt someone. And for what? What extra value does it bring to your life to play with that racist history? Is your fun worth someone else's pain? Is that fun worth the potential damage to your own career goals?

The answer is probably (hopefully) no. The answer should be no. In fact, if the answer to any of the above questions is not "no," then by all means, wear whatever appropriation-heavy, unabashedly racist costume strikes your fancy. It's convenient for the rest of us when racists call themselves out in ways that are easily visible.

Even still, if common decency and basic respect for the humanity of others isn't enough to make you second-guess a decision to wear an offensive costume, then let self-preservation be your guide. Why run the risk of running afoul of a scholarship committee or potential employers who do their due diligence on social media, when you can have any one of hundreds of perfectly fun, scary, or silly costumes that are frankly much more interesting than being a walking racist stereotype? Because doing something racist doesn't just make you a racist in that moment — to the rest of the world, you are henceforth racist to some degree. Social media never forgets, so use your head. Halloween is a night where you can be anyone you want to be, and hopefully, that person is someone who wouldn't offend or hurt someone else.

More like this
Here's How To Support Jewish People Amid Rising Antisemitism
By Hannah Orenstein
13 Gifts From Latina-Owned Businesses For Everyone On Your List
By Marilyn La Jeunesse
69 Great Gifts For Guys No Matter What Their Hobbies Are
By Teresa Newsome, Mia Mercado and Brittany Leitner
7 Joyful Alternatives To A Traditional Holiday Celebration
By Jessica Goodman
Get Even More From Bustle — Sign Up For The Newsletter