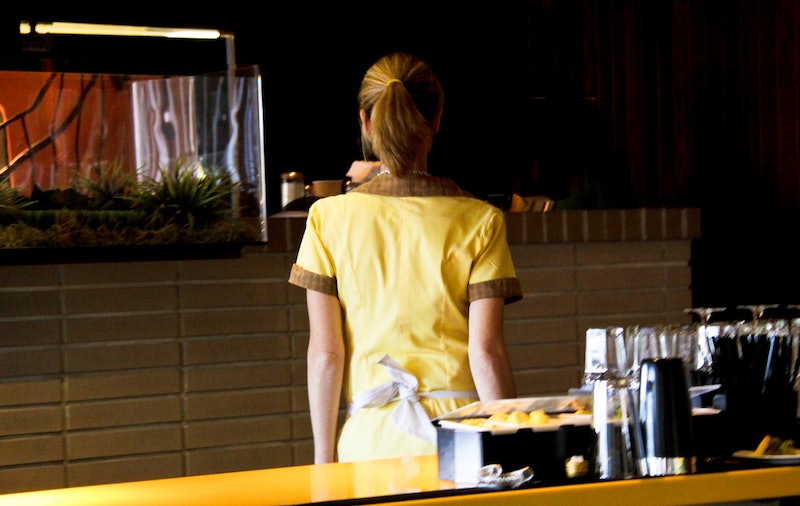 It’s not exactly a secret that sexual harassment in the restaurant industry is rampant (see: Laura Ramadei’s open letter to the “Wall Street bro” who groped her arse and asked if he could take her “to go”) — but a new study has just shown exactly how bad it is. And it’s bad. It’s really, really bad. And it’s — surprise! — especially bad for women. Conducted by Forward Together in conjunction with Restaurant Opportunities Centers, The Glass Floor: Sexual Harassment in the Restaurant Industry surveyed 688 restaurant employees, both male and female, across 39 states — although as Jezebel’s Kitchenette blog noted, it hasn’t been peer-reviewed.

According to The Glass Floor, women comprise 52 percent of all restaurant employees, and 66 percent of tipped employees. The thing with tipping (read: the reason it sucks) is that federal law allows employers to pay tipped workers a sub-minimum wage of $2.13 an hour — even though minimum wage for non-tipped employees is more than five dollars an hour more than that, $7.25. Anyone who works a tipped job is expected to make up that $5 and change through their tips, which has the following effects:

1) Tipped employees rely on their customers for their wages, not their employers;

2) As a result, tipped employees have to “curry favor” — which often means “[tolerating] inappropriate behavior from customers, coworkers, and management” — just to be able to make enough to, y’know, pay their rent and eat and stuff. Most, if not all, of the $2.13 per hour that comes from their actual employers goes to taxes.

With all that in mind, here’s just a little of what the study found:

Yikes, right? And it gets worse. In states where tipped workers make $2.13 per hour, female employees in particular are:

And all workers in states with a $2.13 sub-minimum wage, regardless as to their gender, reported higher rates of sexual harassment.

As Gothamist comments, “Perhaps even more disturbing is that women who were surveyed were often compelled by management to sexualize their actions but feared reprisal if they reported any sexual harassment from management or customers”—that is, women are told to up their “sex appeal,” but are afraid to speak up about any harassment that might result from doing as they were told. According to the study, women who experienced this “reported deterioration in their emotional well-being, including increased depression and anxiety.” They were also one and a half times more likely to “live with harassing behaviors” after having worked in a tipped job.

And worst of all? None of it is shocking, especially to anyone who’s worked in the restaurant industry. I’m incredibly lucky for the fact that the restaurant I worked for back in college was pretty much the best place to work ever — supportive of all their employees, completely free of harassment, good pay, and generally just a terrific environment — but the fact that I even have to talk about being “lucky” to be in a place like that? Not okay. Sexual harassment shouldn’t be the norm in any work environment, for anyone. Period.

The study concludes that although research needs to be conducted about how these rates of harassment compare with those in other countries — many of which do not have a tipping culture or economy — ultimately, the solution to the problem is simple: Get rid of tipping minimum wage and instate one fair wage instead. Wouldn’t that be awesome? Answer: Yes. Now let’s make it happen.

The whole report is long, but it’s worth reading; find it on ROC’s website.