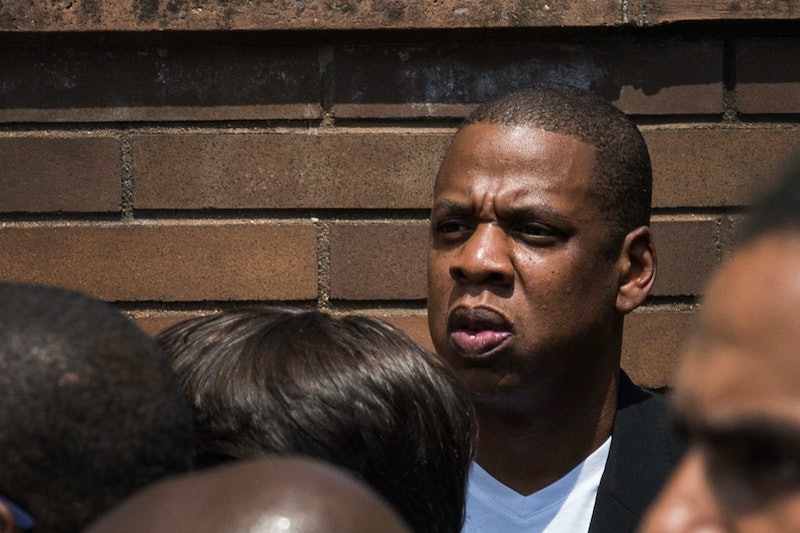 Sometimes Jay Z just wants to go to a museum and not be recognized. Then he comes to his senses and realizes that someone being ignorant of his celebrity in this day and age is a baffling notion that can only be met with incredulity. That's why this video of a tourist asking Jay Z who he is is so simple and satisfying in its entertainment value.

Someone in possession of a camera and a computer posted a clip to YouTube on Monday of Jay Z and Beyoncé on their way to a leisurely day at the Louvre. The individual recording this video seems to have no clue who Jay Z is. At least, he either has no idea who he is, or he's just getting fresh with him. It really could go either way. However, for my own amusement, I choose to believe this man was raised in a cave and is totally illiterate of popular culture.

When one of Bey and Jay's security guards directs the tourist to stop filming, the befuddled man tries to find out what all the fuss is about. As Jay walks by him, he yells "Who is he?" and Jay fires back in the most entertaining, Brooklyn wise-cracky way possible. And no, it's not with the lyrics to "Izzo."

Jay Z responds, "Who are you?" Who am I? Who are you, man! Simple, classic, hilarious.

The best part of this exchange is this guy's refusal to cow at Jay's retort. "MEEPOL!!" Or is it Mipole? Or is it Maypole? In any case, the effect is the same. He's basically like "I'm ME, dude!" without any idea of how ridiculous his casual flippancy sounds.

While I may never know the spelling of this gentleman's name, I must thank him for his cheerful insolence, because it has made my day marginally more entertaining.