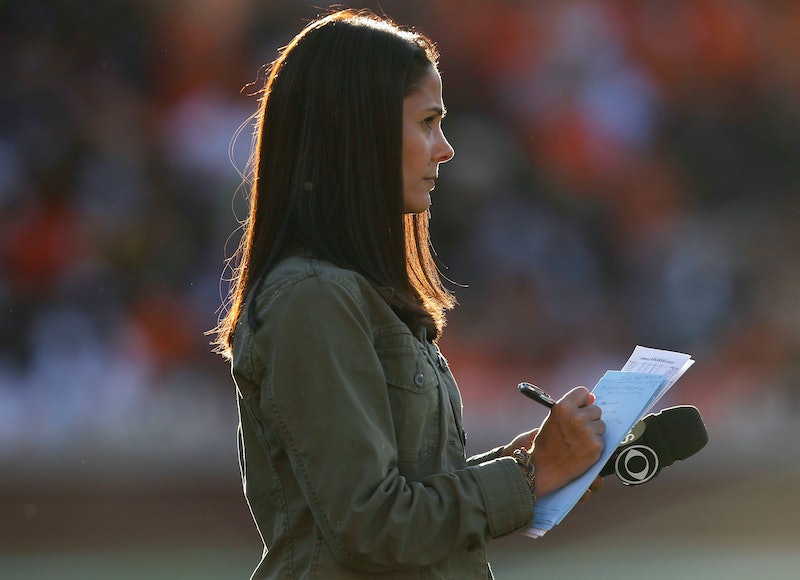 It's been two weeks since CBS' new women-only sports talk show, We Need To Talk , premiered, but so far the show seems to be about everything you'd hope for in a sports show for and by women. The show handles both issues relating to sports, especially involving women — last week, for instance, they discussed domestic violence in light of the Ray Rice scandal — and also plain old talk about sports. And so far, they've been handling both sides of that very well.

The world of sports has long been dominated by men, from the players who get the most attention, to the coaches to the executives, to the sports media. But as is becoming more and more apparent, shutting women out leads to some pretty unsavory things — like, for instance, covering up domestic violence or sexual assault committed by players. In such a thoroughly male-dominated space, it's hard to foster the kind of respect for women as people with power and agency that is needed to change a culture in which violence against women is the norm. Which is why it's refreshing to see women — any women — breaking into the world of sports.

But of course, it's especially great to see a show that tackles issues within sports (particularly women's issues) while also not limiting itself just to these issues and ignoring sports themselves. After all, no matter what some people seem to think, women like sports. A lot.

Best of all, so far We Need to Talk is handling both these roles really well. Their first show, which paid particular attention to domestic violence and the Ray Rice scandal, managed to do so without criticizing Janay Rice or demonizing women who stay in abusive relationships. The women even note how much more difficult it must be for Janay Rice to be dealing with all of this now that all of it has become so public, a level of empathy that has been largely missing from the conversation so far. Instead, their criticism lands mainly on NFL Commissioner Roger Goddell and the leadership at the NFL for not taking the issue seriously, which is as it should be.

Also, can we talk about how awesome it is to just have survivors of domestic violence on television talking about their stories in their own terms and with their own interpretation and their own narrative? Because that almost never happens.

And it seems issues like this will continue to be a vital part of the show. Yesterday's episode featured a discussion about whether football was safe for younger players. And even though I suppose you could interpret this as women only getting to talk about kid stuff, the women treat the topic seriously, and their take is a refreshing change of pace from the macho, hyper-masculine sorts of discussions that normally swirl around football.

These are the kinds of conversations that the world of sports needs to have more often, and they are the kind that are largely lacking in the male-dominated sports world today, making this show a great addition to sports media that will hopefully be taken seriously, especially since these women don't just discuss issues; they also discuss sports themselves.

We Need to Talk has only had two episodes, but if there's any justice it will continue to have many, many more. After all, a show where women are taken seriously as people knowledgable about sports while also adding female voices to conversations about problems and concerns within the world of professional sports? This is clearly what we've all been waiting for. So tune in on Tuesdays at 10 on CBS.