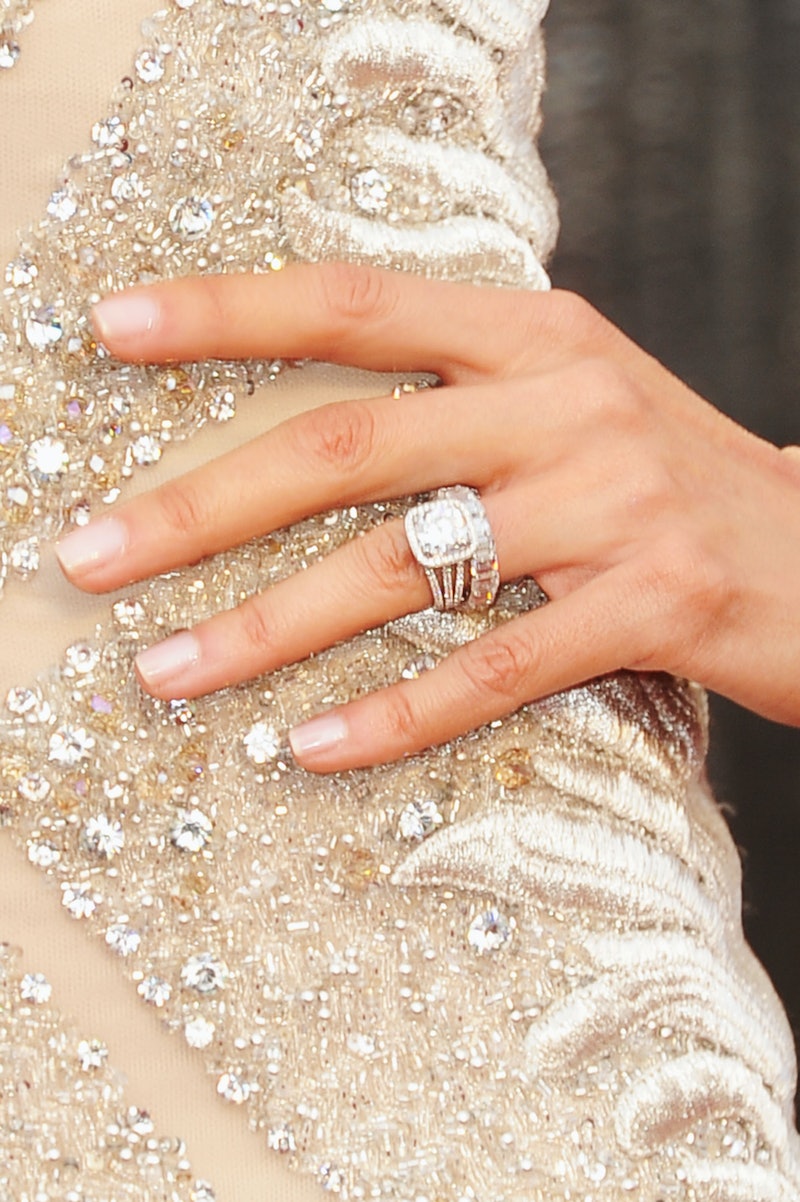 Does a huge engagement ring mean he loves you, or that he's going to divorce you someday? According to a new study out of Emory University, bigger engagement rings may mean bigger chances of divorce, an announcement sure to make lots of people very pissed off. Sorry?

The study looked at 3,000 heterosexual adults who had been married at some point in their lives. They found that, overall, the more expensive the engagement ring, the more likely couples were to eventually dissolve the union. In fact, women whose ring cost between $2,000 and $4,000 were 1.3 times more likely to get divorced than women whose ring cost between $500 and $2,000. They looked into wedding costs, too — nuptials that set the couple back over $20,000 had a 3.5 times greater chance of divorce than those who only paid between five and 10 grand. So I guess money can't buy everything.

The results are surprising because past studies have shown that being relatively more affluent makes a couple less likely to divorce. So you'd think that people who could afford to drop a few grand on a shiny finger-rock would be more likely to stay together, not less.

But then again, having more money doesn't necessarily mean you're going to be super spend-y with it. Engagement rings are the sorts of things people tend to splurge on, so maybe people who go way outside of their price range are more likely to have stressful, potentially marriage-ending money problems in the future. Or maybe people who feel the need to go all out with the ring are less secure in the relationship.

Whatever the cause may be, this study is right up there with that one about more wedding guests leading to longer marriages in terms of strange wedding studies.

Still, the study has a good takeaway message — resist the brainwashing of those in the wedding industry. "Our findings provide little evidence to support the validity of the wedding industry’s general message that connects expensive weddings with positive marital outcomes," the researchers explain. In other words, don't let all the hype get to you.

But before anyone takes this as an indication that they should skimp on the ring as much as possible, you should know that approach can backfire. Couples who spent less than $500 on an engagement ring experienced higher divorce rates than those in the spending bracket above them. So apparently being super cheap doesn't always pay off. Tough break, guys.