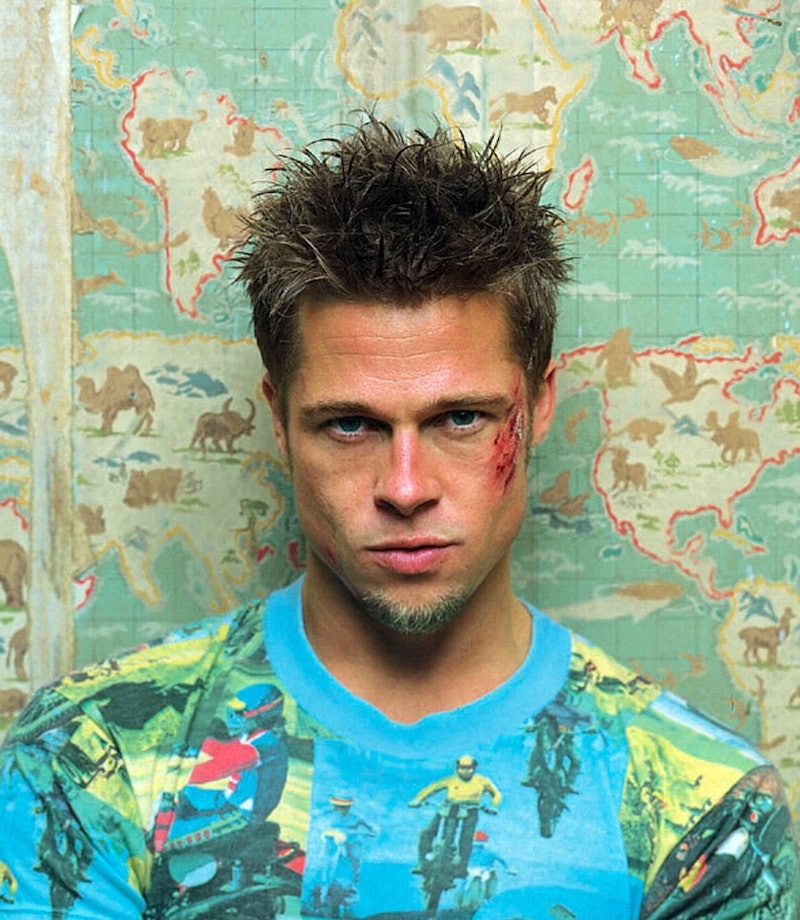 If you started college in any year from 2000-2005, every other dorm was decorated with the same three posters: John Belushi chugging a bottle of Jack Daniels with a "College" sweatshirt from Animal House, the Pink Floyd naked lady butts, and Fight Club. 15 years ago Chuck Palahniuk's best-selling novel about a miserable office worker and his alter ego's solution to driving out the boredom was turned into a movie and changed the way we looked at soap forever. Brad Pitt, Edward Norton, Helena Bonham Carter and a super bleached-out Jared Leto brought us into the very demented world of a very repressed and very angry group of anarchists hell-bent on chaos.

The ringleader of blood and chemical burns for social justice (sort of) was Tyler Durden (Pitt). A man in a burgundy leather jacket and spiky tips that made you remember why people ever went to raves. He was charismatic, commanding, dangerous, and dripping DUH-RIPPING with sex. In short: he was everything an alter ego of a nearly-soulless paper-pusher would be. When he wasn’t beating the living daylights out of his “friends,” he was imparting his “wisdom” on everyone he came into contact with. Here are some of his most iconic words of wisdom:

Ugh, Fight Club was SO deeeeeep.

He must be a Tom Petty fan.

Tyler Durden was telling people to let it go way before Frozen.

*Or meet a member of any sexual orientation. Whatever floats your boat.

"F*ck off with your sofa units and strine green stripe patterns, I say never be complete, I say stop being perfect, I say let... lets evolve, let the chips fall where they may. "

I want Tyler Durden to be my interior decorator! Pro design tips AND life coaching all in one!

OH THEY ARE SO MAD WITH ALL OF THEIR TESTOSTERONE!

I'm seeing this is a theme, here.

That was just for funsies. Happy 15th, Fight Club!