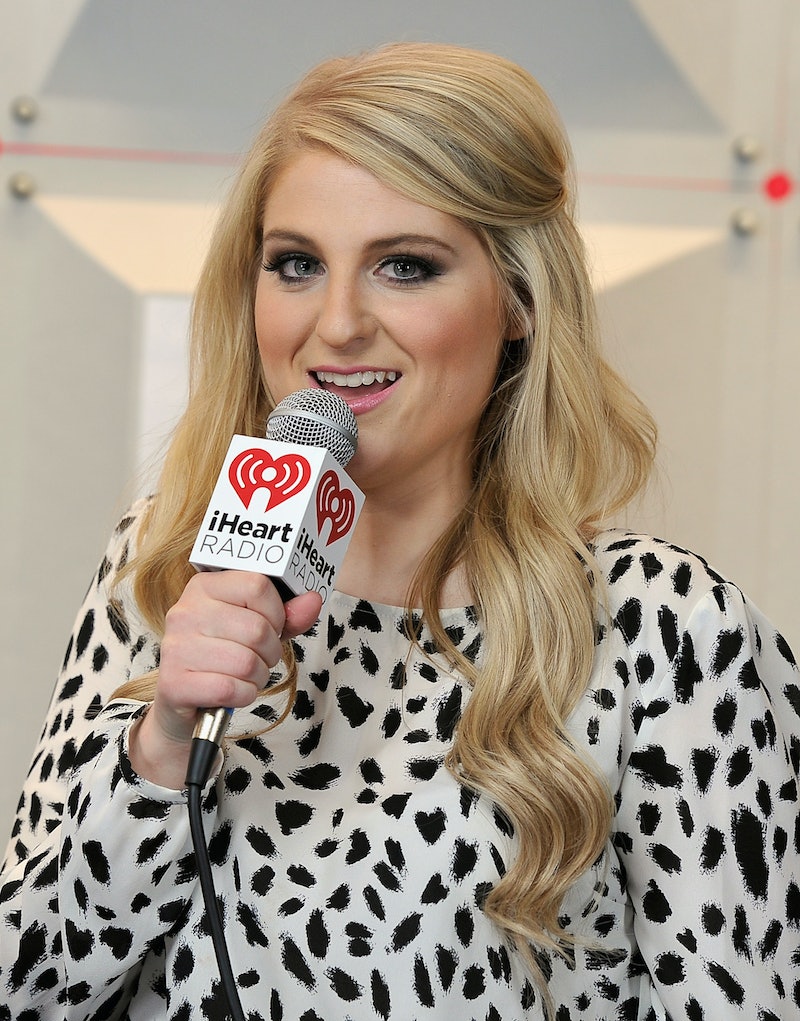 Every time I get in the car, "All About that Bass" is blasting from all 6 of my preset radio stations. The song has taken over the radio and is climbing up the Billboard charts. It has established singer Meghan Trainor as someone to watch in the music industry. It's amazing what one hit song can do for an artist. It's even more amazing, that two megastars passed up the opportunity to record "All About That Bass" as their own. Trainor was actually one of the co-writers of the song, so I'm not sure why she would pass up this gem, but that is what she initially did. She shopped the song around to Beyonce and Adele, but ended up singing it herself as we are all aware.

It definitely makes you wonder how the song would have done with an artist. Pretty much any song Beyonce does ends up dominating the Billboard charts, but maybe it's not about the song, maybe it's the artist/song combination that makes it a hit. I wish that this was some sort of singing reality show where we could have all of the artists perform their version of a song and we could decide on the best one. Now I'm really curious about how "All About That Bass" and other songs would sound with a different singer at the helm. This wasn't the first time or the last time that a star has passed up on mega hit. Check out these songs that were originally offered to other artists. Heads up, there's a lot of Britney reference.

Britney Spears dancing with a python at the VMA's changed my life and it almost didn't happen. Janet Jackson was offered "I'm a Slave 4 U" first. Jackson said it was "too sultry" for her and apparently J.Lo passed on it too. It must kill them both every time it's on the radio because it still slays. Every. Single. Time.

As a faithful Britney fan, I live by the mantra "If Britney can get through 2007, I can get through anything." That was a pretty dark time for the faithful fans that could have ended a lot sooner if Spears recorded the song "Umbrella" when it was originally offered to her. Maybe Brit Brit was afraid of the correlation between the song's title and her awful bald-headed umbrella attack on the paparazzi? Still, I love my girl Rihanna and her Caribbean accent is the only one I can imagine singing about an umbrella (ella ella eh eh eh). The song and that music video with RiRi covered in silver paint turned the singer into a superstar.

"Since U Been Gone"

With Kelly Clarkson being the original American Idol, it was unclear where her career was going. She had a successful first album, but everyone knows that the sophomore slump is real and the pressure was on. My girl stepped up and killed the game, surprising everyone with "Since U Been Gone." Both Pink and Hilary Duff passed on the bitter breakup anthem. Clive Davis convinced the writers to give the song to Clarkson and the rest was history.

With Michael Jackson's career in its golden age and Justin Timberlake's solo career just taking off in the early 2000s, it was an interesting transition in music. MJ released many greatest hits compilation albums but had not had a new jam in forever. Timberlake was trying to establish himself as a solo artist and shed that boy band image. The song was intended for Michael Jackson's "comeback album" Invincible , but Timberlake had it on his debut album instead. This is ironic since JT often cites Jackson as an influence and the two have collaborated both living and posthumously.

This controversially titled, yet infectious song was a huge hit on Kanye West and Jay Z's collaborative album Watch the Throne. However, the beat was originally offered to Pusha T who decline the offer. He has even said, "I tell people all the time that I don't know if I would've attacked it that way which means the record might not have been as special once I got on it." I for one am grateful that Pusha T rejected the beat because now I can bop along to a rap song that references the Olsen twins, McDonald's fish fillet sandwiches, and Will Ferrell.

This song and its iconic music video ushered in an era of blonde pop singers in the late 90s. It made Britney Spears a super star and it put everyone else in the game a step behind her. Hearing "Oh baby baby" will never get old. But could you imagine the song the song as an R&B jam instead of a pop classic? It was originally offered to TLC for their album FanMail. "T-Boz" Watkins from TLC once said, "I was like, I like the song but do I think it's a hit? Do I think it's TLC? I'm not saying 'hit me baby. No disrespect to Britney. It's good for her. But was I going to say 'hit me baby one more time'? Hell no!" Don't cry for TLC though, the album FanMail had plenty of hits including "No Scrubs," arguably the best female empowerment jam of all time.

This song made it big thanks in part to the excessive promotion of the hit movie The Fault in Our Stars. Charli XCX cowrote it hoping to record it for her debut album, but it was rejected. Then the song was offered to Hilary Duff which really excited Charli XCX, with her saying, "My number one project as a songwriter is to write for Hilary Duff, so when I heard about this, I was like, 'f---k! Are you serious?! This is my 'in!,'" she recalled. "I'm going to make a Hilary Duff album!' So we sent over 'Boom Clap', but they came back and were like, 'this isn't cool enough for Hilary." Ugh so sad. Then in a twist of fate the song came back to Charli XCX and she landed on TFIOS soundtrack, giving her the perfect springboard for success.