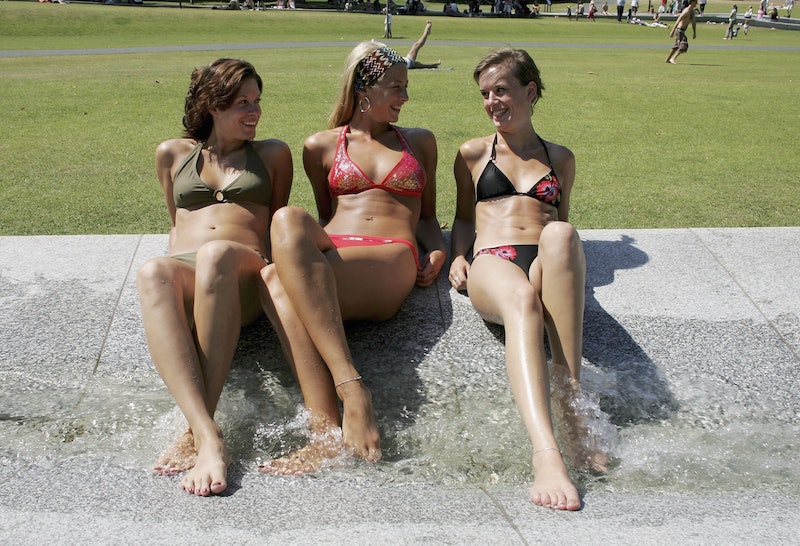 It’s no secret that the best way to killer kickers is good eating and exercise, but even after the weekly quota of thigh-trimming foods and lunges, your legs still aren't looking quite like Gisele’s (probably since she has about five inches of length on the rest of us, but still!).

Thing is, the best legs aren’t necessarily always the tallest. Even-toned, shimmering skin is always going to win out. Which — hooray! — is actually achievable. “Some people request Cameron Diaz’s legs, but we haven’t worked out how to lengthen anyone’s just yet,” says New York dermatologist, Dr. Robyn Gmyrek. “Most people usually request an evenness of skin tone and texture due to the appearance of leg veins, which is really common.”

You may think this is an odd time to be thinking about your gams, since you’re just about to hibernate them away in opaques for the next two seasons, but Dr. Gmyrek disagrees. “People visit me in springtime when they decide they need to do some rejuvenation, but this is actually the time you need to start coming in to make improvements,” she says. “It can take a couple of treatments, so you need this lead time.”

Here's a few tips for your legs of both the DIY and dermatologist-assisted type.

“Women get frustrated because of the ingrown hairs they get from waxing changing the color and texture of their legs,” says Dr. Gmyrek. “By waxing, you pull the hair out, and by the time it grows back, dead skin has covered the opening." She says you can exfoliate the dead skin away or shave instead, but the ultimate cure for smoother legs with less pigmentation is laser hair removal.

“People get discoloration on their legs over time due to leg veins or blood vessels [looking like a bruise],” Gmyrek says. “Different methods such as sclerotherapy, which involves injections such as glycerine being injected into the vein to shut them down, or laser treatments can be used.” She says multiple laser treatments are usually required (one to four, depending on the severity) and they need to be anywhere from four to eight weeks apart.

Right now, Gmyrek says everyone is complaining about localized fat deposits that usually show up on the outside of the thigh (saddlebags) or the inside fat pads that most everyone has. “There are various treatments that can minimize this, some giving a permanent 25 percent reduction in fat cells,” she says.

“They are called body sculpting procedures, including fat freezing or radio frequency heat. We just apply the devices to the skin and the energy either cools or heats up the fat to the point of killing the fat cells.” Your body naturally removes the cells in a four- to 12-week period after the treatment and takes around two hours per thigh (for the freezing treatment).

You may be fit, but still experiencing a looseness of skin. “As you age, you’ll start to get skin laxity, and above the knee is a key spot. If you stand up, you can often see a little skin folding up above the knee, and that’s not fat, it’s just [loose] skin,” Gmyrek says. If this is something that bothers you, doctors can “stimulate the collagen in that tissue to tighten up, using [laser] procedures like Thermage.”

Makeup artist Erica Sauer has a few foolproof tanning tricks she uses on celeb Ashley Benson and Jenna Dewan-Tatum to prime their legs for the red carpet camera flash. “I love Lorac Tantalizer,” she says. “It’s quick-drying, long-lasting, and doesn’t streak. It leaves you looking like you just got back from a tropical vacation.”

Sauer’s best kept secret is that she’ll use Dior Airflash to contour her client’s legs. “It’s a natural matte tan that you can apply like you are airbrushing yourself — with an precise applicator,” she says. “Apply it along the natural muscle lines of the legs, flexing your muscle to bring out the natural contour of your quads.” Also repeat on your calves by following the same lines of muscle.