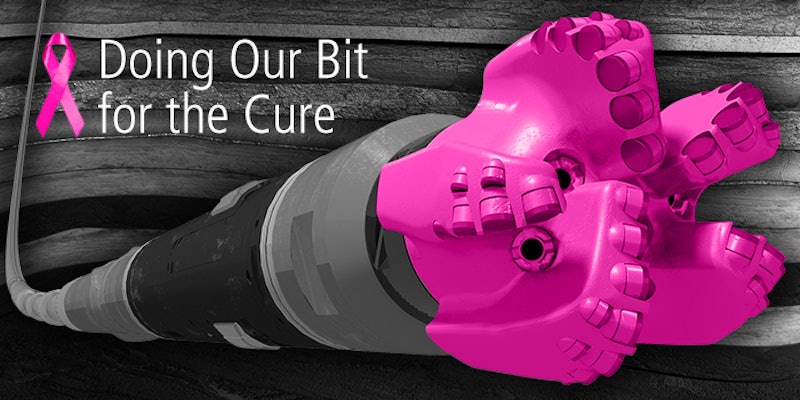 The Susan G. Komen Foundation is taking an odd marketing turn for Breast Cancer Awareness Month: fracking. After donating $100,000 to the leading breast cancer research organization, fracking company Baker Hughes is partnering with Susan G. Komen to spread awareness of the disease through hot-pink drill bits. According to Baker Hughes, this is the company's "bit for the cure."

Why would a massive fossil fuels company, which employs mostly male drillers, change the color of their drilling bits to Barbie-pink during the month of October? Well, the company seems to think the color will motivate employees to talk about breast cancer prevention with their female family members. Baker Hughes Director of Operations Bill Debo told Fuel Fix:

Our hope is from the water cooler to the rig site to the coffee shop to everywhere, someone gets this information to their spouses, their girlfriends, their daughters so we can create awareness and end this disease forever. ... In 1976, when I was 17, a senior in high school, my mother died of breast cancer. It's really important for me to be involved in this and do what we can to end breast cancer forever and save lives.”

The company has reportedly delivered 1,000 of these breast-cancer drill bits to fracking sites worldwide. This is the second year in a row Baker Hughes distributed these specially designed bits during Breast Cancer Awareness Month; last year, the company produced 500 pink drilling bits as part of the "Doing Our Bit for the Cure" campaign." Baker Hughes also has a year-long partnership with Susan G. Komen, and participates in their Race For the Cure fundraiser.

The research, education, and lifesaving community programs funded by Susan G. Komen over the past 30 years have made a significant impact in the fight against breast cancer, and we are privileged to sponsor such important efforts. As someone who has been impacted by this life-altering disease, I understand the importance of Komen's ongoing research, education, support services and global programs, not only to those fighting the disease, but also to their loved ones, friends, and colleagues.

To be sure, more research still needs to be done. However, there have also been multiple studies indicating possible links between chemicals used at fracking sites and cancer. Just last month, a study from the National Institute for Occupational Safety and Health found that employees at fracking sites are exposed to dangerous amounts of benzene, a carcinogenic gas that can lead to cancer. The researchers called benzene "of major concern" because it's toxic to the body — from the kidneys to the bloods cells — in high levels.

Fracking fluids can contain chemicals linked to breast cancer, including known and suspected carcinogens such as benzene and toluene, and endocrine-disrupting compounds such as the phthalate DEHP. Evidence is beginning to emerge that these chemicals may contaminate underground water sources. Researchers have also found that ground and surface water near fracking sites has more endocrine disrupting activity than water from other locations.

With all the toxic chemicals Baker Hughes is pumping into the ground, we thought they didn’t care about women’s health. However, this partnership with Komen makes it clear where both organizations stand on this issue. Komen has been notably absent from all discussions about fracking and breast cancer, but with these pink drill bits they are thrusting this issue onto the national stage.

It looks like this latest Komen campaign is going to go as well as their Planned Parenthood partnership.