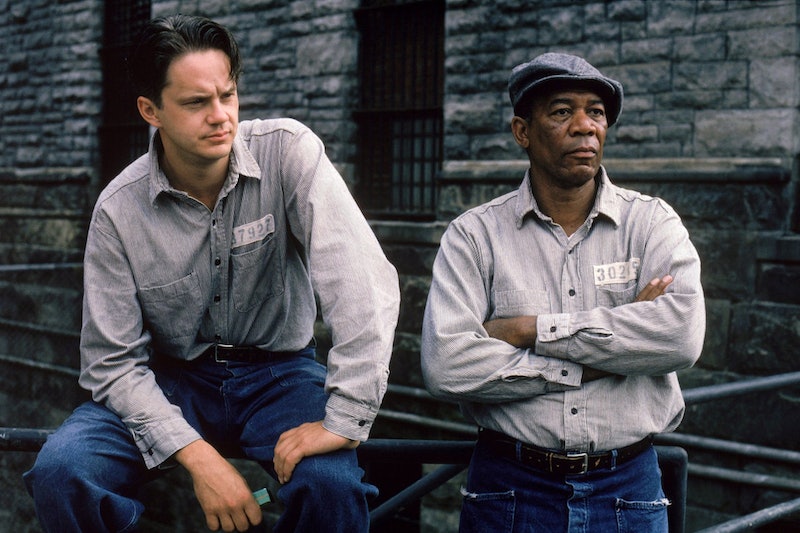 As someone who consumes as many movies, TV shows, books and albums as I can get my hands on, my pop culture favorites are constantly changing. "The best teen show ever" might be Freaks and Geeks in morning but Buffy by afternoon; my "must-read" book of the week might be Bad Feminist on Monday and Not That Kind of Girl by Friday. When it comes to movies, however, my answer for "best ever" rarely changes. Sure, I might swoon over the latest Oscar bait or marathon Harry Potter like anyone else, but as far as the title of all-time favorite film goes? My answer is always the same: nothing, in my mind, is better than The Shawshank Redemption .

As anyone with TNT undoubtedly knows, Shawshank, a 1994 drama about the friendship of two prison inmates, is something of a classic. It may have been a bust upon release and gotten shut out at the Oscars, but 20 years later, it's considered one of the greatest (and most-watched) movies of all time. I'm far from the only person to think of it as my favorite film, and for good reason; Shawshank is an incredible work of storytelling, one of the most moving, compelling, and flat-out genius pieces of cinema ever made.

And it's also a "dude movie." Thanks to its nearly all-male cast and ability to make even the toughest male viewer burst into sobs, Shawshank has landed on the top of every "movies for men" or "guy-cry films" list ever made. The title is certainly justified; I've been in the presence of way too many male friends failing in their attempts to hide their Brooks-caused tears to argue otherwise. There's no doubt about it — guys love Shawshank. But when I, a girl, say I love it, too? Blank stares, confused expressions, and, more often than not, the word "really?"

Women, it seems, aren't supposed to love Shawshank. Sure, they can like it — anyone with half-decent taste can see that it's a well-made movie — but as for loving it in the watch-it-every-time-it's-on-TV/know-every-quote/have-deep-feelings-about-it way? Women just don't feel that way about it, because why would they? Shawshank is a movie about guys, aimed at guys. It's their friendships, their dialogue, their stories, with nary a female star or "female plotline" in sight. A woman calling it her favorite movie would be like a man saying Bridesmaids changed his life; it just doesn't make sense.

Except, of course, it does. Even disregarding the very valid but familiar men-can-like-movies-starring-women-and-vice-versa argument, there's the fact that there's nothing about Shawshank that makes it a "men's movie." First and foremost, it's a story about friendship. The bond between Red and Andy is as strong and complex as the one shared by Thelma and Louise, or C.C. and Hillary, or Romy and Michele, and just as likely as any "girl" movie to make you reach for the phone and have an overdue catch-up with your best friend. Then, there's the film's other themes: faith and trust, survival and resilience, aching failure and liberating triumph. Nothing about these ideas are exclusively male, yet when it comes to defending Shawshank's "guy-ness," more than a few men I've encountered have relied on them for misguided support.

And as frustrating as it is to get looks of shock every time I reveal that I, too, love Shawshank, I'm not angry at the guys giving said looks. The film is starring and geared towards men, and I don't blame them for being surprised that people out of its target audience also adore the film. Who I do blame is Hollywood. The only reason Shawshank is considered a "dude movie," instead of just a classic movie that happens to star men, is because similarly-themed films about women rarely get made. Try to remember the last movie about survival and friendship starring an all-female-led cast hit theaters, and you're bound to come up with one title only: Thelma & Louise. As for male-led films in the same vein? There's Saving Private Ryan, The Green Mile, Lord of the Rings, 50/50 — the list goes on and on. Women don't get Shawshank-like movies "made for them," despite the only qualifications — friendship, inspiration, compelling drama — being as gender-unspecific as it gets.

So yes, I love Shawshank. I'd probably love it even if Hollywood produced a dozen female-led dramas a week. It's a fantastic film, and I expect it to keep its "all-time favorite" title on my list for a long, long time. It'd be nice, though, to not have to defend myself every time a guy hears it's my favorite movie and goes, "wait, really?," or be forced to end another fruitless search to find a close-themed, female-starring movie to watch on a rainy night. Shawshank may be a "dude movie" right now, but as a woman who can quote Red with the best of them, I'm eagerly awaiting a time when the "dude" in that description is simply replaced by "great."